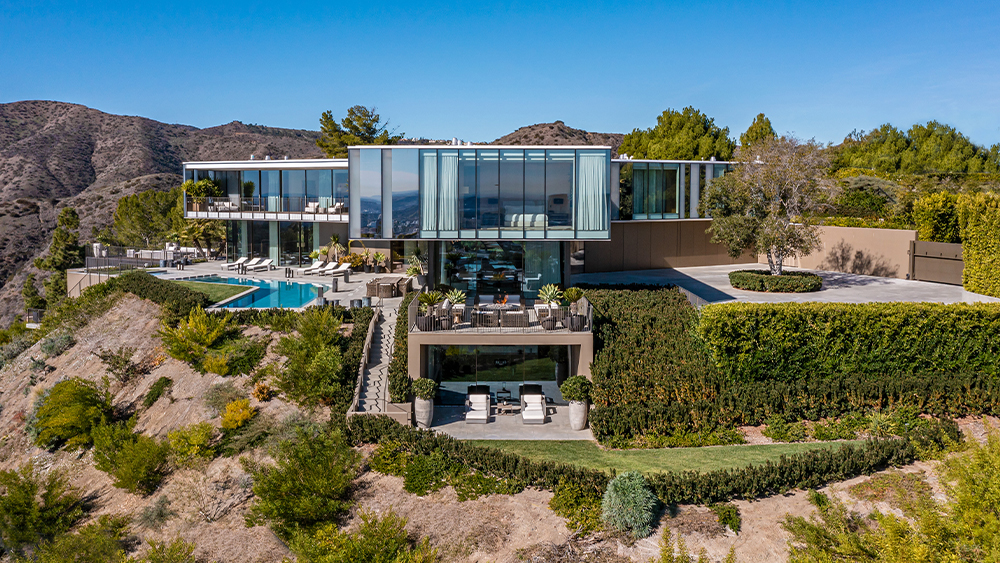 Want to understand what it truly takes to be considered wealthy in America today? Look no further than the rise of the $100 million house: Recently released sales data reveals that at least eight such deals closed last year, a 300 percent increase over 2020. With each closing, those ultra-estates are helping to reshape the definition of wealth, per Mauricio Umansky, the Beverly Hills–based founder and CEO of luxe property broker the Agency. “The fact these mega deals exist, it’s such a phenomenon,” he tells Robb Report, “Ultrahigh net-worth individuals have been defined so far as those worth $30 million or more—to me, that’s the wrong conversation now. It’s at least $100 million or more.”

The surge in sales (and prices) isn’t surprising, of course: America’s real-estate market has been turbocharged at all levels—median prices are up 20 percent year on year—thanks to a combustible mixture of low interest rates and lockdown-related savings. Umansky and his firm explore this surge, and other trends, in its second annual red paper. The report offers a snapshot of luxury real-estate trends worldwide, deploying data from its network of offices from Los Angeles to Amsterdam. Some of the findings aren’t surprising: The six million homes sold stateside last year was the highest tally since 2006, just before the Great Recession, for example. Others caught even experts like Umansky off-guard: What caused the double-digit growth in Boston, for example, especially at the luxury end? “I’m not sure,” he laughs after a pause.

Umansky is clear, though, of several emerging trends that will shape the luxury home market over the coming years. The world’s supply-chain issues continue, of course, even long after the Ever Given cargo ship was dislodged from its Suez Canal–blocking perch—and even luxury real estate is affected. Demand is high, outstripping existing housing stock, Umansky notes. The expense of materials and scarcity of labor throttles supply further, as it discourages construction of new mansions. Compare a ready-built, 10,000 square-foot-home on the market for $25 million. The cost of buying a lot and building topped out at around $15 million 15 years ago, he says. Those supply issues mean that a custom home now costs around $23 million. Few able to buy such a home would consider two million dollars a worthwhile saving for the hassle (and delay) of starting from scratch. No wonder, then, that Umansky says even the wealthiest are opting out of custom builds. Instead they’re accepting the convenience—and compromise—of a turnkey home. Of course, the slump in building like this primes the market for a second surge, once the existing inventory has been thoroughly sold-through.

Mauricio Umansky, CEO and Founder of the Agency alongside their 11490 Orum Road listing  The Agency, Simon Berlyn

Only one category of move-in ready mansions is struggling right now, per the Agency: the classic, airy open-plan SoCal spread is no longer as crave-worthy, thanks to widespread remote working. Buyers need to carve out private spaces for each family member, however large the footprint of a home. Umansky says the firm now stages these open-plan mansions differently, breaking up the space to show how it can be reconfigured. “We’re using virtual staging a lot, where we show the house a little bit differently on an iPad—we show it with walls,” he says. The firm even sometimes asks clients to undertake some construction to help reduce the oversized spaces. Even with current supply-chain constraints, he says, it’s a worthwhile investment to achieve a higher final price.

Most mortgage-watchers know that that luxury real estate is now trading largely on all-cash offers. “I just did a deal this week for $40 million, and it was all cash, and we’re seeing it for the first time all around the country, not just Los Angeles but Florida, New York or an Aspen ranch,” Umansky says. Despite impressions, though, most aren’t from cashed-up tech bros and their ilk. The Agency’s research shows a demographic difference: Millennials were the majority of applicants for home loans, while equity-rich baby boomers were able to borrow against their existing assets to swoop in with mortgage-free bids.

The biggest shift, according to Umansky, isn’t in how homes are financed—it’s the number of properties in a buyer’s portfolio. Many well-to-do families have long owned two homes, a primary estate and a vacation getaway. A portfolio of homes was once limited to the ultra-wealthy. That’s no longer true. In 2022, third or fourth homes are now the norm for much of the 1 percent. “They now have the money to buy three or even four homes, and they can think: What lifestyles do I want to be in? The mountain, the beaches, an urban setting and perhaps a golf community in the desert,” the broker says.

Buyers recognize that there are major upsides to sinking more money into more homes: Vacation rentals remain strong, with Americans who ditched hotels during the pandemic remaining keen to rent a standalone property. “And I can tell you from personal experience, I pay my entire year’s costs for a home from four weeks of rentals—that’s an amazing lifestyle,” Umansky confesses, noting that such a business model has expanded from areas where it was traditionally used—the Hamptons, say—to other luxury vacation markets, whether Mexico or high-end islands in the Caribbean like Turks & Caicos. Many also use real estate to hedge against looming inflation and overheated indexes. “If I have money sitting in my bank account, and I don’t really like the stock market, and I can rent the property to make 6 percent on my money, then use the home whenever I want—why not have a bunch of them?”