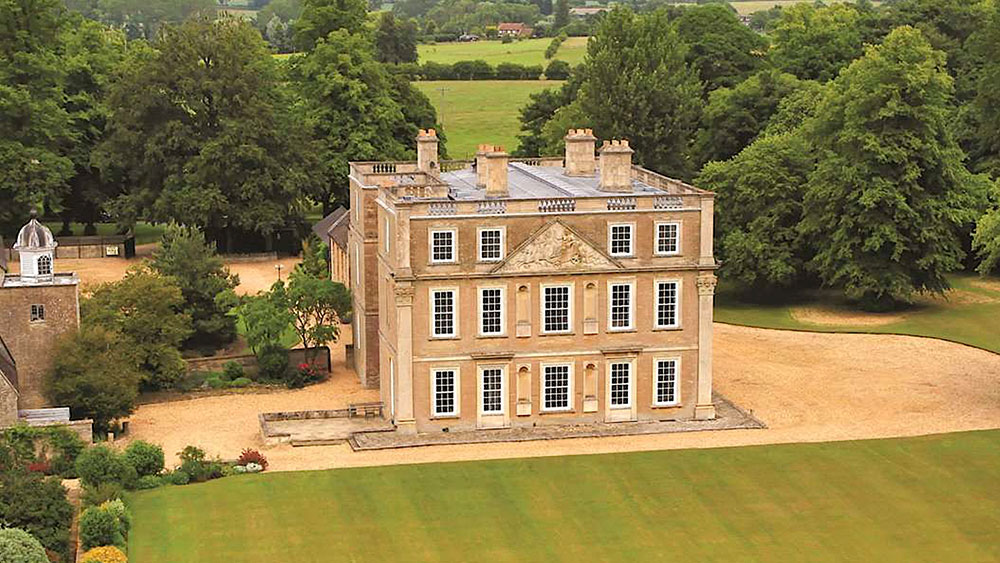 A palatial 300-year-old English manor house, modeled after Buckingham Palace and surely worthy of a cameo appearance in The Crown, has just been listed for $11 million.

Hinwick House, a chauffeured hour-and-a-half drive from Central London, sits on 37 wooded acres and comes with such must-have aristocratic features as a Downtown Abbey-style bell board for summoning servants, croquet lawns, herds of deer, a lake with swans and stables with a riding paddock.

Completed in 1714, this spectacular Queen Anne grand country mansion near the town of Wellingborough in Bedfordshire, was built for wealthy aristocrats Richard and Diana Orlebar. They had asked that it resemble the then-Buckingham House, which eventually grew to became Buckingham Palace, the Queen’s iconic London residence.

The Orlebar family owned the estate until the late 1990s. By the time real estate entrepreneur Sam Singh bought the estate in 2014, it was in desperate need of restoration.

Singh and his wife Nina, who reportedly bought the mansion for £4.5 million (around $5.9 million at the time), spent a further $4.87 million and two years on a complete renovation that involved more than 120 artisans and craftsmen.

Today the main house covers 18,600 square feet, has 20 bedrooms and 12 bathrooms spread over three floors and its Great Hall comes with an extensive collection of stag heads mounted along its stone walls.

The home’s ornate formal dining room with its two huge glass chandeliers, offers seating for 16, though don’t even dream of sitting at the head of the table in the infamous Orlebar Chair. Covered in lion skin, with arms resembling the limbs of the lion, tradition demands that only a member of the Orlebar family can ever use it. This could make some of the new owners’ holiday dinners a bit awkward.

The home was modeled after Buckingham Palace.  Photo: Courtesy of Savills

One of the many exquisite bedrooms is the Victoria Suite, named after Queen Victoria, who had historical connections with the Singh family. It features a artifacts and paintings of the monarch. Fit for a royal, the suite has a fireplace, and its ensuite bath tub comes with a quirky cylindrical glass shower tube featuring gold piping.

One of 20 bedrooms.  Photo: Courtesy of Savills

Adjoining the house is a somewhat awkward-looking Victorian wing that was added in 1859, while across a courtyard are three separate two-bedroom guest cottages. In total, there’s accommodation at Hinwick House for up to 36 adults. As you’ll need plenty of help to run the place, there are four separate staff apartments.

The quirky tub and shower combo in the Queen Victoria suite.  Photo: Courtesy of Savills

As you’d expect of a 37-acre estate, plenty of outdoor pursuits will occupy guests. Everything from a tennis court, to croquet lawns, to trails for hiking or horse riding. If it gets too nippy outside, you can retreat to one of three bars, including the cozy pub called The Snug.

Since Singh completed the restoration, the family has tried to cover some of the sky-high running costs by offering the estate for everything from house parties, to conferences, to weddings. Until recently, you could rent the entire house from $11,000 for a weekend, or up to $25,000 for a full week.

The current £8.5 million (around  $11 million) asking price is actually something of a bargain. In 2016, Hinwick House was offered for the equivalent of $17.67 million, though it was pulled off the market when a buyer failed to materialize.

Today the estate is being offered by Savills of London, with brokers Crispin Holborrow and Hugh Maconochie holding the impressive listing.

One of the property’s three pubs.  Photo: Courtesy of Savills

The entry gate and drive up to Hinwick House.  Photo: Courtesy of Savills

An ideal lawn for croquet.  Photo: Courtesy of Savills