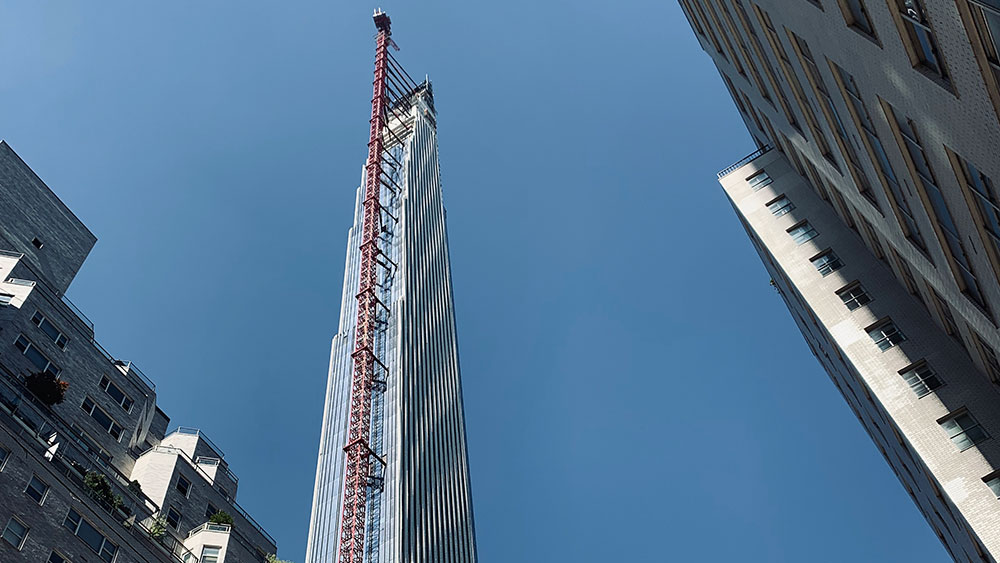 The Covid-19 pandemic may have slowed the New York City real estate market, but that hasn’t stopped many of its luxury towers from unveiling new listings. Among them is 111 West 57—the tallest residential building in the Western Hemisphere and, with a width-to-height ratio of 1:24, the skinniest in the world—which has just launched two new loggia residences worth a collective $105.5 million.

Despite the circumstances, there’s reason for the listing agents to feel a bit confident. Unlike many other supertalls in the city, this 1,427-foot-tall tower has had some success with its offerings as of late, having sold two units worth around $30 million apiece back in June. One of them, Residence 70, was purchased by an international buyer who only ever viewed the apartment virtually; the contract was signed in less than 30 days.

As for the two new listings, the first, a triplex penthouse dubbed, aptly, Triplex Park Loggia Penthouse 72, is the most expensive unit in the building to date at a whopping $66 million. Like the rest of the building, the 7,130-square-foot apartment features interior design by Studio Sofield, a firm with a meticulous eye for detail and a real expertise in luxury homes.

There are four bedrooms and five-and-a-half bathrooms in total, as well as a kitchen that’s fully kitted out with top-of-the-line Gaggenau appliances—from the convection and steam ovens to the coffee machine. The primary bedroom on the third floor is its own private utopia, with two dressing rooms, a walk-in closet and two bathrooms. Views are centered on Central Park below.

Of course, if you’re living at 970 feet up, you’re bound to have spectacular vistas elsewhere, too, including the great hall, the dining room and many of the guest rooms. The 1,367 square feet of outdoor loggia space is (obviously) another great vantage point.

The unit’s more bespoke touches include the gray, solid oak floors in the great hall, the bronze fittings in one of the primary baths and the plaster and oak cabinetry in the kitchen.

The second new unit, Tower Residence 50, is a $39.5 million duplex with a similar layout. At about 4,500 square feet, it does have one distinct advantage over the penthouse, though: more outdoor space. With nearly 2,000 square feet worth of loggia, it’s perfect for those who prefer entertaining with a view.

Regardless of which spot you choose you’ll be able to take full advantage of 111 West 57’s amenity suite, which includes an 82-foot lap pool, communal outdoor space, dedicated concierge and more.

All that being said, if you’re scared of heights, then this may not be the spot for you.