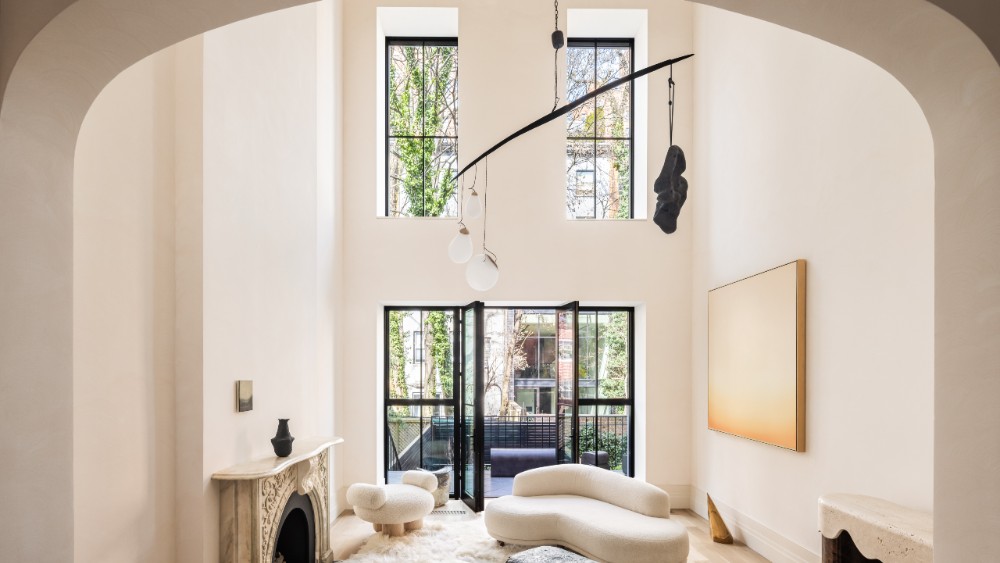 In a time when new builds are dominating the New York City skyline, this home in Manhattan’s Chelsea neighborhood recalls its historic past. This $12 million townhouse at 483 West 22nd Street, located within the Chelsea Historic District, was first built in 1901 and is situated on one of Chelsea’s loveliest tree- and townhome-lined streets.

“The street was built early in the Greek Revival period,” says listing agent Benjamin Glazer of Compass. “Because of this and how the townhome faces Clement Clarke Moore Park, it’s designated as a landmark for its special character and special historical and aesthetic interest.”

Though the Greek Revival-style exterior remains, the inside has been soulfully gut renovated with artful touches for a buyer seeking a high-design home. It also has six floors of living and entertaining space totaling 4,150 square feet, including a garden level and rooftop, not often found in New York. The chef’s kitchen is also quite spacious and features custom cabinetry as well as state-of-the-art appliances, like a Lacanche Cluny stove, Sub-Zero, Thermador and Wolf appliances with brass flourishes.

There are exceptionally large bedrooms and four bathrooms, each meticulously designed with a different look and feel. No two rooms are exactly alike, which makes the townhome feel quite personalized. The primary bathroom is spectacular, with a fireplace, gorgeous green-tiled shower, a deep marble soaking tub in the center and large period-style windows.

The pièce de résistance is undoubtedly the grand entertaining space with 22-foot ceilings, a loft-style sitting area, large windows, and glass doors that open to a terrace overlooking the garden. There are plenty of hidden areas and corners ideal for tucking into a book or hosting intimate groups of family and friends. A spacious living area on the lower level also has glass doors that open directly onto the garden.

Not only does the townhome get plenty of light in nearly every room, but it has views over the park Clement Clarke Moore Park and no risk of future building to block this. For families or those with dogs, the park has a playground for children and ample green space to roam around.

Each bedroom has a fireplace.  Evan Joseph

“When you take a 121-old-year historical home down to the studs in New York City during a pandemic, you better have some patience,” Glazer says. “The most compelling part of the home is that it is actually done perfectly. Most people that embark on such an endeavor unfortunately do not have exquisite taste. This was a labor of love and an expression of high design.”

The gut renovation included rewiring the home and installing a four-zone HVAC system, full water filtration and smart technology, so there is virtually nothing the future buyer has to do except furnish the space. The home is staged by Galerie Philia, a contemporary art and design gallery, and is decorated with its latest sculptural-inspired collection, Hometown. Should buyers wish, they can work with the agent to purchase pieces they like when they buy the home.

The home is crafted using the finest materials.  Evan Joseph

Design details include a Chateau Domingue Limewash floor on the parlor level; a bluestone garden (which is also fully irrigated); several carved stone and marble fireplaces; exquisite tilework in the bathrooms; brass Monopoint lighting; and fixtures and hardware from Allied Maker and Armac Martin. There are also beautiful arched entryways and curved walls throughout, giving the space a soft look.

The area is known as the Chelsea Seminary District because of the many churches and theological structures nearby, like the General Theological Seminary and St. Peter’s Episcopal Church. The area running from West 20th to 22nd Streets between 8th and 10th Avenues was added to the National Register of Historic Places in 1977 for its vast history.

A living room opens onto the garden.  Evan Joseph

The bluestone garden is ideal for hosting in the summer.  Evan Joseph

The kitchen connects to the living area.  Evan Joseph

The parlor levels connects to the lower garden level via a staircase.  Evan Joseph

Curved walls give the space a soft look.  Evan Joseph