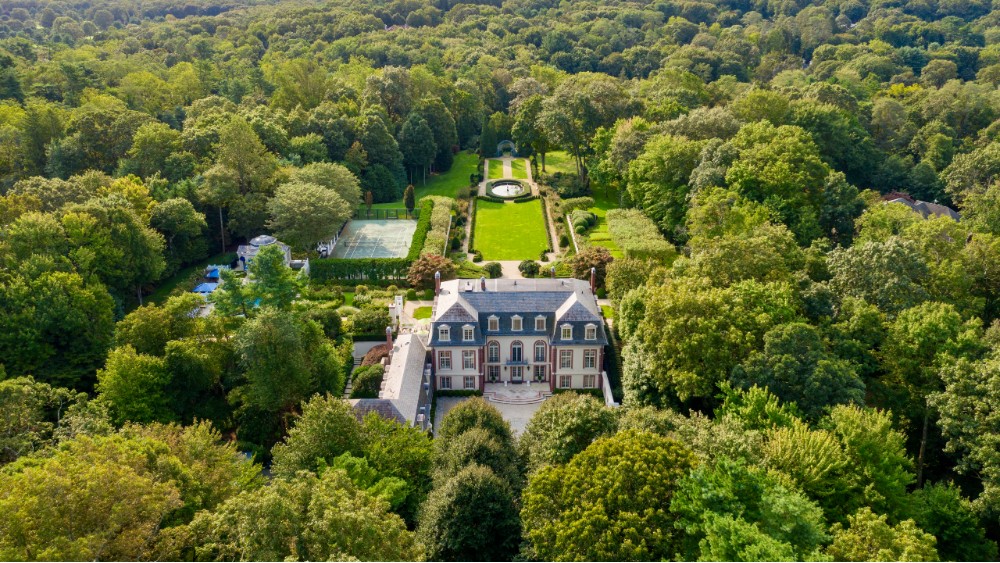 Step back in time at this magnificent, eight-acre estate in Brookville, New York, just 28 miles from Manhattan. This Long Island estate, called Haut Bois, was built in 1916 and retains its carefully preserved French Chateau aesthetic.

The eight-acre, $12.195 million property was initially inspired by Louis XIII’s hunting lodge, which was later expanded into the Palace of Versailles by Louis XIV. The home has a brick and stucco exterior and was built by renowned American architect and interior designer Ogden Codman Jr., an early preservationist and co-author of one of the most important interior design books ever written, The Decoration of Houses.

The residence is accessed via a private tree-lined stone driveway that leads to the motor court and front entrance. There are 18 rooms, which includes seven bedrooms, seven bathrooms and two half-bathrooms. The interiors are just as opulent as the property’s grounds; details include antique stone fireplaces, hand-painted wallpaper and crystal light fixtures, as well as period-specific decor and statues. It feels as though every space has been transported straight from France, from the formal living room and to the corridors.

The main level houses the eat-in kitchen (which has a La Cornue range), a wet bar, library, family room and one of the bedrooms. The lower level has guest quarters, a billiards room and a fitness area with a spa and sauna. Also on this level is the temperature-controlled wine room.

The magic, however, lives outside the home. The back patio overlooks the sprawling, formal French gardens, which are lined by towering trees and manicured hedges. There’s even a fountain and the original arbor. Just off the gardens and lawn is the pool, the Palladian-style pool house and tennis court.

Every inch of the backyard exudes an air of grandeur, and you’ll be hard-pressed to find another garden like this in the area. The landscape was designed by Jacques Greber, and also includes an irrigated vegetable garden, a chipping and putting green, an outdoor fireplace and a grill area.

This isn’t the first time Haut Bois has been available. In 2018, it hit the market for the first time for $15 million. Now it’s back with a lower price. Haut Bois was restored to its original glory in 2000, with several modern updates like an irrigation system, outdoor lighting and mechanical systems, as well as replaced windows, flooring and a roof. Haut Bois is listed with Jason Friedman and Sarah Rudi Friedman of Daniel Gale Sotheby’s International Realty.