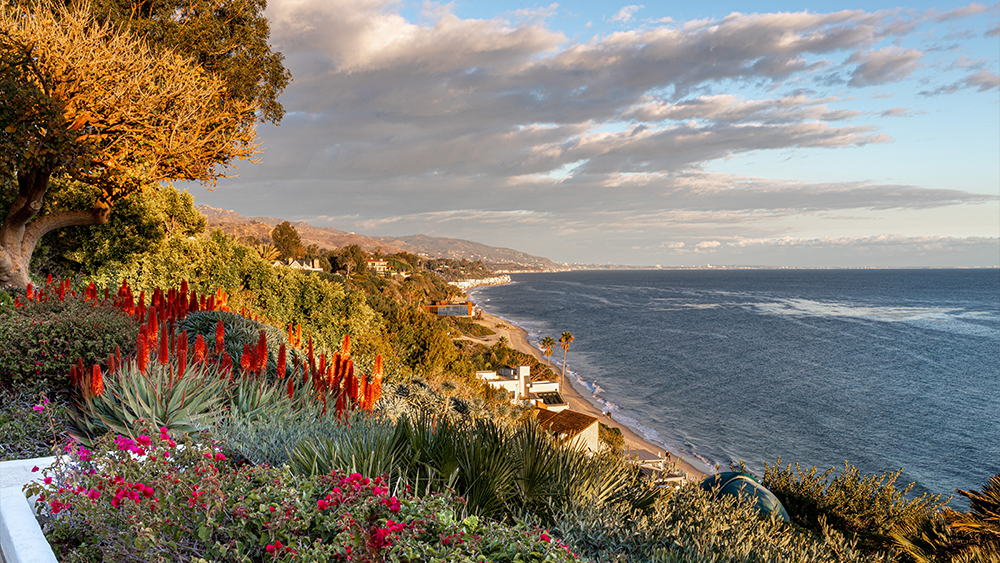 Justifying the sky-high sticker is the fact that the estate sits on 6.6 acres of some of the most-coveted Southern California real estate, boasting roughly 340 feet of ocean frontage with direct beach access. Add to that, the Spanish Colonial-style main house sprawls over almost 17,000 square feet, is ringed by 10-to-20-foot-high walls and comes with its own two-bedroom guest cottage. And did we mention the state-of-the-art, 14-seat movie theater with its row of trembling D-Box seats, the nine-hole mini golf course and lighted tennis court?

For some, though, the estate’s true appeal is its vantage point. “What really sets it apart are those astonishing views, from Palos Verdes to Point Dume and across to Catalina Island,” Lisa Loughlin, listing broker with Sotheby’s International Realty, tells Robb Report. “At night, with all the shimmering lights along the coast, there’s a reason they call it the Queen’s Necklace.”

Burton and his ex-wife Helen Musk reportedly bought the estate back in 2012 for $36.5 million from the estate of computer industry pioneer and Intel founder, Max Palevsky. Palevsky had acquired the huge Paradise Cove lot, stretching from the Pacific Coast Highway to a high bluff overlooking the ocean, back in 1974 and completed his dream home a year later.

According to Sotheby’s Laughlin, the Burtons invested well over $5 million in upgrades and renovations after their purchase, using well-known Malibu architect Doug Burdge of Burdge and Associates to mastermind the makeover. Work included demolishing walls to open-up room and adding walls of glass and oversize windows to make the most of the jaw-dropping views.

To reach the estate, a security gate off Pacific Coast Highway leads on to Sea Lane Drive and into the ultra-private Paradise Cove Beach community.

Stunning carved wooden gates open into the main residence and the spectacular 20-foot-high reception room, with its wall-to-wall glass windows and doors that showcase those stunning views of the Pacific. Steps away is the huge, open-plan kitchen, dining and family area with  full-width concertina doors that lead out on to a vast, two-level ocean-view terrace.

“This area used to be three rooms, but during the renovations it was opened up to become just one space. Now it’s the focal point of the home,” says Loughlin.

A staircase leads up to the home’s six ensuite bedrooms, which include a spectacular primary suite with its own expansive glass-edged balcony.

Also on this level are two spacious, ocean-view offices, with the main one featuring its own private outside entry staircase. There’s also a large den close by that, according to Loughlin, could be used as a gym, additional office or an additional bedroom.

For exercise, you can hit some balls on the north-south positioned tennis court—important for not getting the sun in your eyes—or swim laps in the infinity-edge pool. Or, for a real heart-pounding workout, simply run up and down the flights of steps leading down to the beach.

According to Laughlin, the owners have decided to sell because, with their children now away in college, they’ve become empty-nesters. These days, Burton is CEO of 10:10 Games, after founding the video game giant Traveller’s Tales in the UK in 1989.

“The price reflects the incredible demand for this caliber of property in and around Malibu. And this home is unique in so many ways. It provides a once-in-a-lifetime opportunity to live in this very special part of the world,” adds Loughlin.

For any aspiring buyers, just know that handing over $125 million won’t actually get you the priciest home on Paradise Cove Beach. Right next door, Steve Jobs’ widow, Laurene Powell Jobs, is building the ultimate Malibu mega-mansion sitting on not one, but three oceanfront lots.

Her truly massive compound includes a property she bought in 2015 for $44 million. She then added an adjoining home two years later, paying a reported $16.5 million. Then in February last year, she bought the home next-door to the Burtons for $17.5 million. If you’re keeping tab, that’s a total outlay of $78 million.

It’s possible Burton and Musk are quietly hoping to get a call from Jobs making an offer they can’t refuse.

Check out more images of the estate below: