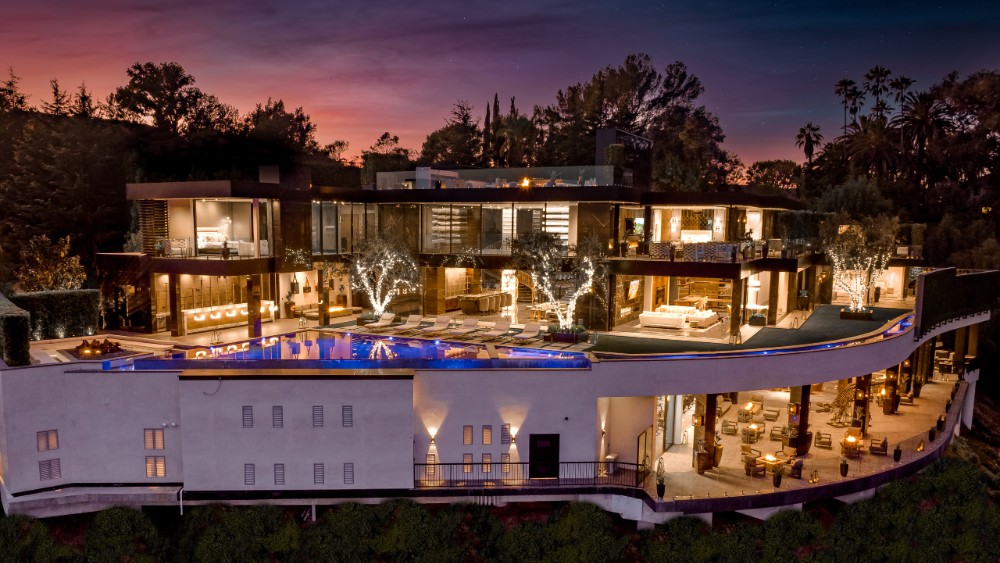 In Los Angeles, where luxury comes with the territory, La Fin takes it to the next level. Located at 1200 Bel Air Road in the tony Bel-Air neighborhood, the mega-mansion is now on the market for $139 million.

Though LA is filled with glass box-style modern homes, La Fin’s level of opulence feels more apt for Dubai than the US. Shiny marble floors, gold accents, gleaming chandeliers and lacquered wood are just a few design details that are sure to attract a buyer who appreciates the finer things in life. More akin to a private hotel than a home, La Fin is perched high on a hill overlooking Bel-Air, downtown LA and Century City.

The entry  One Shot Productions

The spec home was developed and is being sold by real estate investor and physician Joseph Englanoff, who was also a lender for headline-grabbing home the One, which is set to be auctioned in early March for $295 million with no reserve. So it comes as no surprise that his development La Fin feels similar to the no-expense-spared nature of the One—albeit with a slightly lower price tag. Dr. Englanoff named it La Fin, which translates to ‘the end’ in French, because it signifies the buyer has reached the end of his search for the perfect home.

Materials were imported from across Europe.  Jim Bartsch

If your definition of the perfect home is “over-the-top,” then the good doctor just might be right. The mansion spans nearly 40,000-square-feet and has 12 bedrooms and 18 bathrooms. It’s hard not to think of the epic parties that could be thrown here when you take a peek inside, with its 23-foot ceilings and large-scale layout. Materials were sourced from around the world, including various types of marble from Italy and throughout Europe.

Of course, the home is wrapped in windows which welcome in plenty of natural light and frame views in each room. Throughout the home there are magnificent custom crystal chandeliers; most impressive, however, is the 44-foot chandelier that cascades through the center of the grand spiral staircase connecting the home’s three floors. It’s made of nearly 50,000 crystals.

Even the kitchen is a work of art.  GR Studio

Like most high-quality products, it’s all in the details here. The primary suite is particularly impressive: Wrapped in lacquered Italian oak walls, the gold-accented room features a marble fireplace imported from Portugal, a wraparound deck and a bathroom with 24 slabs of book-matched Calacatta gold marble and a 100-square-foot shower. The primary closets are couture showroom-style walk-in closets made for any size wardrobe.

The primary suite  One Shot Productions

You’ll also be hard-pressed to find a similar array of amenities elsewhere. These include a sub-zero vodka tasting room, which comes with faux-fur stoles to keep you warm; a ventilated cigar room; a 6,000-square-foot nightclub; and multiple bars. There’s also a private wine room with a custom Murano glass art installation inspired by a dress worn by former first lady Jackie O.

As this is a home designed for entertaining, La Fin exceeds the typical expectations there, too. While most homes come with a theater, La Fin has two. The first is an indoor theater with motorized seating wrapped in Belgian leather, while the second is an outdoor theater with a hydraulic, 23-foot LED screen.

The outdoor movie theater has a 23-foot LED screen.  One Shot Productions

Car aficionados will love the rotating garage display for up to six cars. The home also features a full-scale fitness center with a rock climbing wall and Peloton bikes and catering facilities for large events. For guests, there is a separate guest penthouse, and staff have their own caretaker residences. A dedicated security command center is also on the property to watch over the two-acre grounds.

The home is listed by agents Jon Grauman and Adam Rosenfeld of the Agency.

There’s a rotating car display for up to six designer cars.  One Shot Productions

A few of the 12 bedrooms.  One Shot Productions

The primary suite closet was inspired by a showroom.  One Shot Productions

There are views of downtown LA to Century City.  One Shot Productions