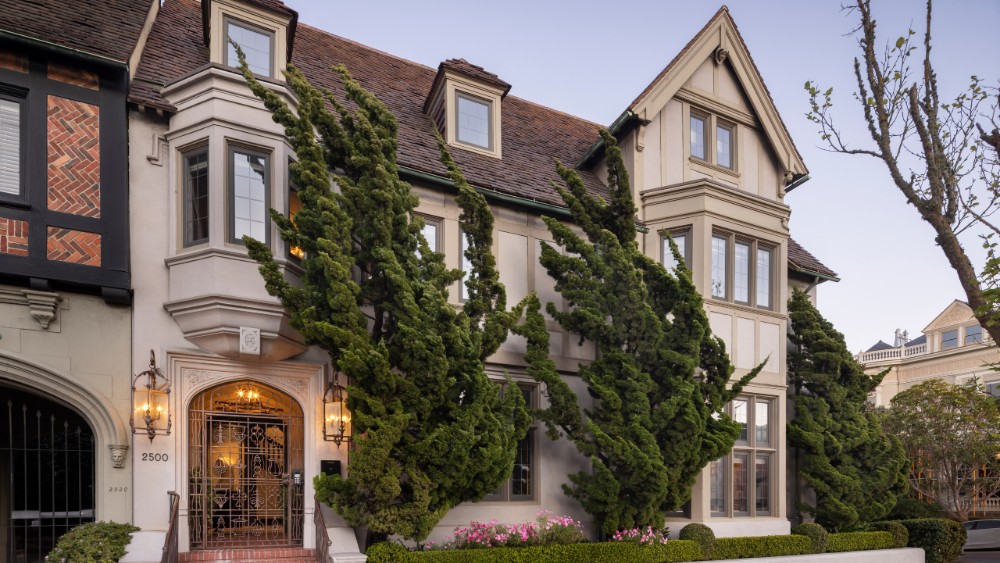 One of the most historic listings in San Francisco’s Pacific Heights neighborhood recently hit the market for $16 million.

The Tudor revival-style home at 2500 Divisadero was built in 1933 by architect Angus McSweeney of Willis Polk & Company, which was responsible for many San Francisco landmark properties. The residence was originally built for the Bissinger family, who were prominent patrons of the art. Matriarch Marjorie Walter Bissinger was the co-founder of the city’s Asian Art Museum who fell in love with Asian art while accompanying her husband to Japan on business trips. She was also a patron of the San Francisco Opera and San Francisco Symphony.

The home has many nods to Bissinger’s devotion to the arts which have been carefully preserved as ownership changed over the years. It was once the Canadian Consulate and a Decorator Showcase house, and one of the most recent owners was hedge funder and philanthropist Jeff Ubben. The current sellers are former Kimpton Hotels CEO Mike Depatie and his wife, Holly, who extensively renovated the home after purchasing it in 2013.

“We wanted to embrace the historical elements of the home, yet bring it into the present,” Holly Depatie, who spearheaded the home’s more recent redesign, tells Robb Report. “We wanted to marry this beautiful, lovely past and give it a more modern edge, and I think we accomplished that.”

The 9,125-square-foot home has six bedrooms, eight bathrooms and a two-car garage. A few things that Depatie discovered during the renovation was the exterior ironwork by renowned iron artist Eric Powell, whose ironwork incorporates various symbols and elements, including fog and water, that represent San Francisco. They also preserved the hand-carved woodwork, which they painted black instead of the standard white, and the Tudor-style exterior.

“It’s often the case in San Francisco in these older homes that they have all this dark woodwork and paint it white,” she says. “I wanted it to have an edgier, sexier feeling to it by painting it black, which was absolutely the right decision. The contrast between that and the white walls makes it feel very fresh and modern.”

The couple spent $2 million renovating the home, according to WSJ. It feels decidedly cosmopolitan thanks to additions like sleek black-and-white marble floors and large windows to let in light. The home spans three floors and many of the rooms have been repurposed. For example, Mrs. Bissinger had made a stage on the third floor for her children to perform plays. Now, that stage area is the movie theater and the former viewing area for the stage has been turned into a billiards room.

“There are also features from the original owners like the comedy and tragedy masks carved into the limestone in the living room, because Mrs. Bissinger entertained people from all over the world,” Depatie says.

Not often found in San Francisco is the private, gated outdoor space with ample seating area and a fire pit that doubles as a water fountain. “The fact that nobody can look into the courtyard is very unusual for San Francisco,” she says. “This Southern-facing courtyard actually wraps around the house. To capitalize on this feature we also installed large windows wherever we could.”

The formal dining room is spectacular, with a horizontal glass fireplace scaling almost the entirety of the wall. It also has a hand-applied gold-leaf ceiling that exudes a golden glow. The couple also added a library with massive Gothic chandeliers, a mirrored gym and an apartment on the lower level that opens onto the courtyard. During the renovations, the former owners upgraded the heating and technology to 21st-century standards.

The home’s previous owners were all philanthropists and the Depaties are, too. They’ve hosted countless philanthropic events at the residence and raised money for causes like the Millennium School, the Spark Program, Baraka Girls and the Boys and Girls Club of San Francisco, where Depatie is a Board Member. While they owned the home, many celebrities, artists, musicians, tech entrepreneurs, scientists, business leaders, political leaders and more have graced the halls. They also were close with many notable figures, including Martha Stewart. In fact, Stewart would stay at the house so often that the third-floor guest suite was called “the Martha Stewart Room.”

“We felt like we needed to conclude our city chapter,” says Depatie, who, along with her husband and their youngest son, moved to their home in Napa Valley during the pandemic (they have since decided to stay there full-time.) “It’s been a wonderful house to raise our youngest son in and bring our family all together in, and it’s also been a wonderful place for people to gather for causes that they are very passionate about. The house just has a great energy.”

The home was built in 1933.  Douglas Friedman

The theater, which used to be a stage for the children of the original owners.  Douglas Friedman