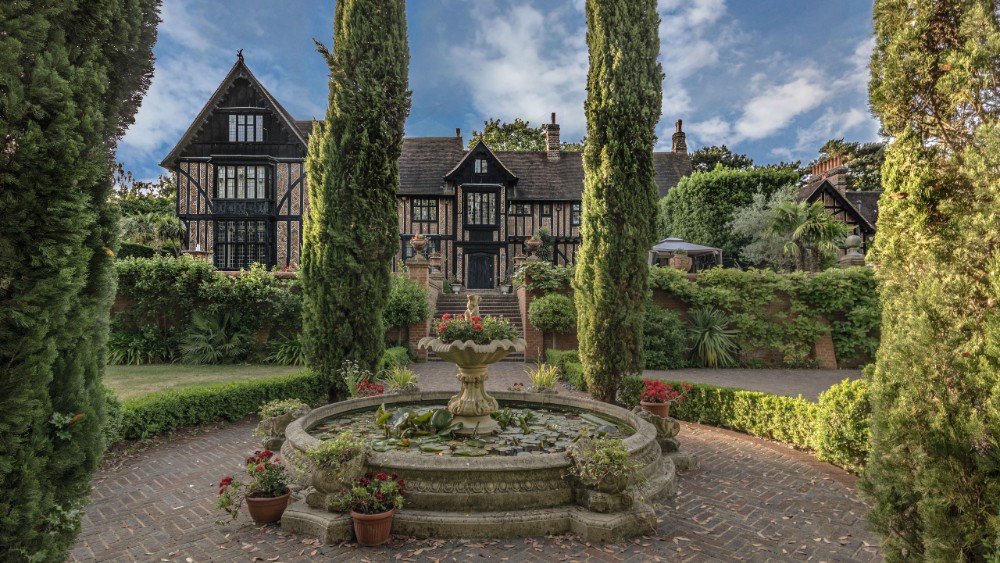 The UK is filled with historic landmarks that boast wild tales, but few come close to the unusual story behind the estate called Cedar Court, set on Coombe Hill Road in the town of Kingston-upon-Thames.

The grade-II listed estate (a distinction in the UK that denotes homes’ historical and architectural significance) dates back to the 1480s, when it was first built for a wealthy salt merchant. The home was initially constructed on River Colne in the town of Colchester, one of Britain’s oldest recorded towns, where it remained until 1910.

The historic mansion was first built in the 1480s, then relocated brick-by-brick in 1910.  Rokstone

Now this is where it gets interesting: In 1910, an antiquarian bought the home for £350, Mansion Global reports, and spent nearly 10 times the amount he purchased it for to painstakingly dismantle and rebuild the home brick-by-brick on a plot of land 70 miles away in Kingston-upon-Thames. During this time, the home was fully rebuilt to its original glory. Now it’s on the market for $17.5 million, after a hefty refurbishment to modernize the house (like the kitchen) while retaining its 500-year-old charm.

The grade II-listed home has been extensively preserved.  Rokstone

Sitting on one acre of land with mature gardens, the home is filled with centuries of museum-quality and history textbook-worthy design, stories and character. The 14,447-square-foot estate has 12 bedrooms and nine bathrooms, as well as six reception (or living) rooms spread over its three floors. There’s also a separate two-bedroom annex.

The owners’ were sure to update the home while staying true to the period style of its history, however, so the kitchen and dining room have been modernly upgraded for today’s luxury buyer. Located in the renovated east wing, the sleek kitchen has marble countertops, state-of-the-art appliances and custom cabinetry. This side of the home also features creature comforts like a laundry room, pantry, garage and cellar.

Meanwhile, the west wing of the home is where the more historic rooms can be found, like a magnificent dining hall, study and living room. The second and third floors house the private quarters. Meanwhile, outdoors, the landscaping is another world unto itself: the grounds feature a koi fish pond, an original well and fountain and sprawling manicured gardens and expansive lawns.

“The property is in a class by itself and would make the perfect family home that anyone would be proud of,” says Shana Edwards, associate director of Rokstone and the home’s listing agent. “Viewing this historical home, which features original plasterwork depicting “Tudor Roses,” a large crest of Henry VIII and Katherine Parr’s initials, is truly a magical experience.”

While the location looks exceptionally tucked-away and future buyers will enjoy the land’s privacy, it’s also very close to high streets, shopping, schools and parks. In fact, it’s technically located in greater London and is near Richmond Park, Wimbledon and Kingston.

The kitchen and dining room have been updated.  Rokstone