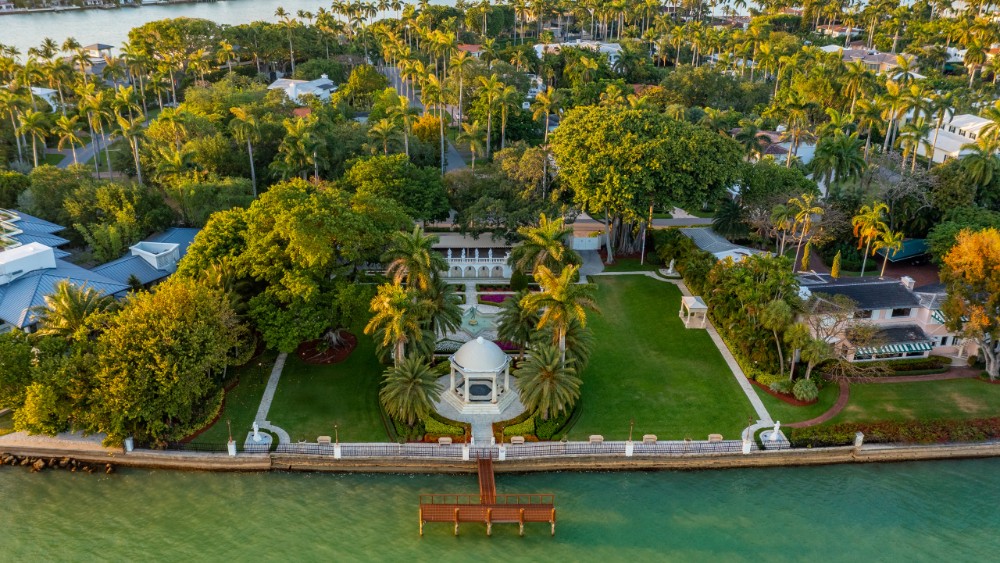 With the purchase of this $170 million Miami Beach compound, you can have one of the priciest residential properties in all of South Florida—and do some good.

The collection of estates at 16, 18, 22 and 24 La Gorce Circle, located on the prestigious guard-gated La Gorce Island, were once owned by the late M. Lee Pearce, a doctor, philanthropist, investor and entrepreneur who died in 2017. Dr. Pearce, who owned hospitals, medical facilities and banks, paid roughly $3.1 million in the 1980s for all four properties. The trust of Dr. Pearce currently owns the estate and the proceeds will benefit the Dr. M. Lee Pearce Foundation, a private grant-making foundation that benefits medical research and music that has worked with Harvard, the Mayo Clinic, the Metropolitan Opera, the University of Miami, the Washington National Opera and others.

The four parcels comprise three acres of land and have three separate residences, three private docks and a private park. The property is fully gated and can even be subdivided into individual homes should the future buyer wish. Some of the original structures date back to 1936, and this is the first time in history that all the parcels are able to be bought together.

“This is the most incredible assemblage of properties in all of Miami Beach, offering approximately 600 feet of waterfront with spectacular views to Biscayne Bay and downtown Miami,” says Jill Eber of the Jills Zeder Group with Coldwell Banker Realty. “This is a prized, trophy compound that many of the most discerning buyers have been waiting for years to come onto the market.”

The property was renovated in 2010.  The Jills Zeder Group/1 Oak Studios

The main residence at 16 La Gorce Circle is a two-story home with five bedrooms, seven bathrooms and three half-baths. At 18 La Gorce Circle, there is a smaller two-bedroom, two-bathroom and one half-bath home with a guest house and wine cellar. Dr. Pearce converted the garage at this property into a wine storage area. It also has a circular driveway and fountain.

One of two pools on property.  The Jills Zeder Group/1 Oak Studios

Dr. Pearce lived at 18 La Gorce Circle during the decades that he owned the property. He used the other homes for guests, staff and entertaining. He even installed a theater in one of the properties, complete with red-velvet chairs. The homes are designed in a classical style, featuring wood floors, frescoes in some of the bedrooms, sparkling chandeliers, Renaissance-style columns and many statues inside and out. There are also two pools and one of the garages was converted into an office and conference center. It was around 2010 that he renovated the existing properties and added many of the additional amenities.

La Gorce Island is a private island that connects via a bridge to Miami Beach and has been home to many high-profile residents over the years, including Billy Joel, Cher, Matt Damon, Ricky Martin and more. In total, there are 60 homes on the island, 28 of which are waterfront properties, and many feature manicured gardens and exceptional privacy.

“Never before available on the market, this listing offers a unique opportunity to own a property of this magnitude, at a time when there is extremely limited supply of homes and land in Miami Beach,” says Jill Hertzberg, also with the Jills Zeder Group. “In addition, La Gorce Island is one of the most prestigious gated communities in South Florida, offering the utmost privacy to its residents.”

This listing is currently the most expensive listing in all of South Florida. Earlier this year, philanthropist Adrienne Arsht’s $150 million Miami estate held that title.

There is 600 ft of waterfrontage and three piers.  The Jills Zeder Group/1 Oak Studios

There are three homes set over four parcels of land.  The Jills Zeder Group/1 Oak Studios