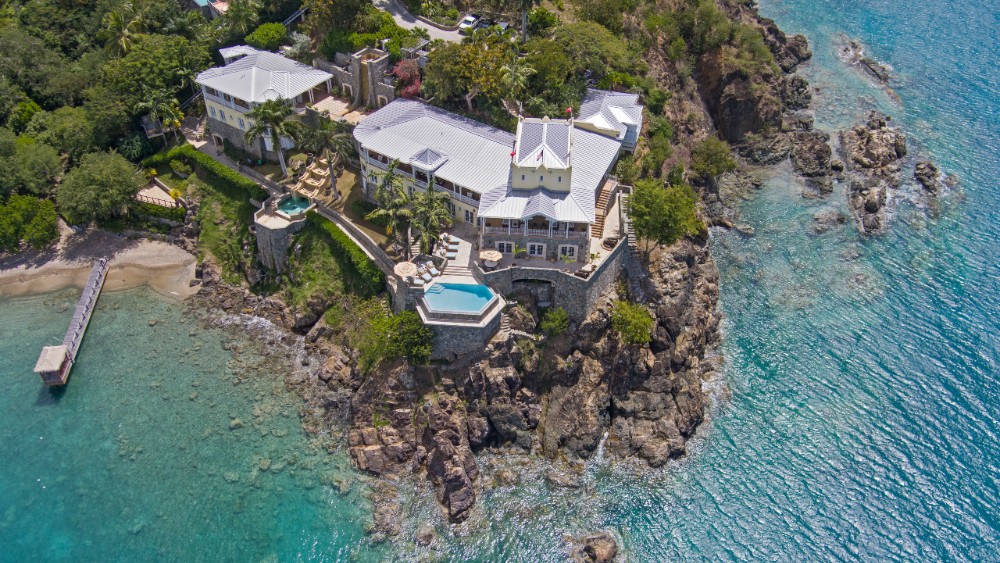 It’s every family’s dream: a compound with four sprawling homes, pirate-like features to entertain the kids, plenty of nearby activities and several areas to enjoy a rum punch surrounded by family and friends. With both adults and children of all ages occupied, the property becomes more than just a second vacation home, but a special family legacy.

Waterfront Estate on the lively island of St. Thomas in the US Virgin Islands, currently listed for $24 million, was built exactly for that purpose. Perched above the azure Caribbean waters and a craggy coastline, Waterfront Estate consists of four villas: a main residence, and three guest homes, that were completed in phases between 2004 and 2016 and fitted with all the modern accoutrements and luxuries one could want or need.

The view and pool at the main residence.  Don Hebert

It sprawls nearly 9.5 acres over 12 parcels of land that are located in two sought-after luxury neighborhoods on the island, Estate Havensight and Estate Bellevue. The property also comes with 50 feet of beach (which isn’t technically private but is rarely visited by anyone other than the home’s owners) and a private, 80-foot dock.

“This home is for those who love entertaining and creating memories,” says Nick Van Assche, a broker with Sea Glass Properties of Luxury Portfolio International. “This isn’t a home you see available on the market often, especially in the Caribbean region.”

The original owner was inspired to create a replica of an old Danish fort (the island was conquered by Danish settlers in the 1600s) with 17th-century features, like working water cannons, a historically accurate pirate ship, a bastion wall and fountains. The foundation of the home, as well as the terraced fountain and other details, are made of blue stone, or bituminous rock. Being that St. Thomas is a volcanic island, the former owner spared no expense in building the home using this local type of stone and even employed local stonemasons and artisans to build it from scratch.

The living area at the main residence  Don Hebert

“They wanted to build a very historically accurate Danish structure,”says Van Assche. “Even the gingerbread features along all the gallerias were inspired by historic Danish cottages.”

The kitchen at the main villa.  Don Hebert

All of the homes are seamlessly connected via walkways lined by native plants and are united by shared spaces, like the stunning pool and deck that overlook Hassel Island and the ocean beyond. The second villa’s design has a more modern aesthetic and also has its own pool, should your guests prefer even more privacy.

You’ll truly feel like you are reigning over a kingdom, as the entire home sits dozens of feet above the rocky promontory and ocean. The owner decorated the interior in a period Caribbean colonial style, and most of the furniture and decor comes from St. Thomas or the US Virgin Islands; other pieces come from Barbados, as much is traded among the islands of the West Indies. The owner is an avid antique collector and items from his private collection are also found within the homes, including bespoke architectural pieces, furniture, fixtures and decor.

Each room feels like a treasure trove of design discovery and has its own unique style, with colorful antique tiles and stones sourced from all over the world, including the Caribbean, Mexico and Italy. Even the planked wood floors seen in the living areas were purchased, restored and installed to exude a lived-in look. It’s hard to believe the home is a 21st-century construction after seeing spaces like the bar, with its curved brick and wood-paneled ceiling that exudes the feel of a bygone era.

There are immaculate views from every room, and most bedrooms feature their own private balcony. The place accommodates individuals with disabilities or those that don’t want to trek down the mountain, as there are two mountain elevators to whisky you to the beach, with stopping points to the many levels of the main estate. (The other option is to take the stone staircases that lead to the beach.)

The bar, perfect for storing a rum collection.  Don Hebert

Some of the home’s coolest features are the terraced fountains and working water cannons. The owner created a technology-enabled show centered around the property’s fountain. With the push of a button, it enacts music, fire, fog and lights within the fountain structure, and the water cannons can be activated to shoot real cannons. (Part of the technology tracks cruise ships, marine vessels and night kayakers so they can stay out of the cannon’s path.)

While it’s still officially being decided if the home will be sold with the pirate ship, any buyer would be lucky to own it. Called Corteza, the 60-foot vessel is rigged like a true 17th-century ship with cannons, a crow’s nest, wood exterior and hand-carved bows. There are even light features underneath the boat that synchronize to the show. Little Tug is also a smaller, playful children’s-centric boat that the owner built for their family.

The outdoor dining table at the main residence.  Don Hebert

“Any future owner will love the wild imagination coming to life,” Van Assche says. “This is an overload of creativity. The owner was the dream, and that’s the spirit of the property. There’s a lot of land to continue to dream and do whatever you want here. This was a playground and adventure land full of unbridled creativity.”

The home is minutes from St. Thomas’ main port and marina, one of the premier mega-yacht marinas in the entire world, and nearby is the private airstrip so you can land your private jet and be at home in 15 minutes.

There is a stone pathway that connects to the beach.  Don Hebert

“I could say all the words I want, but it’s simply one of those properties where you’d be amazed and understand its magic the second you walked through the front door,” he says.

The pirate ship, which may or may not be sold with the property  Dan Forer

There are real water cannons on the property.  Don Hebert

All bedrooms connect to the outdoors  Don Hebert

The pool at the guest home  Don Hebert

The poolside lounge at the guest home  Don Hebert

The living room at the guest cottage  Don Hebert

The charming kitchen in the guest cottage  Don Hebert