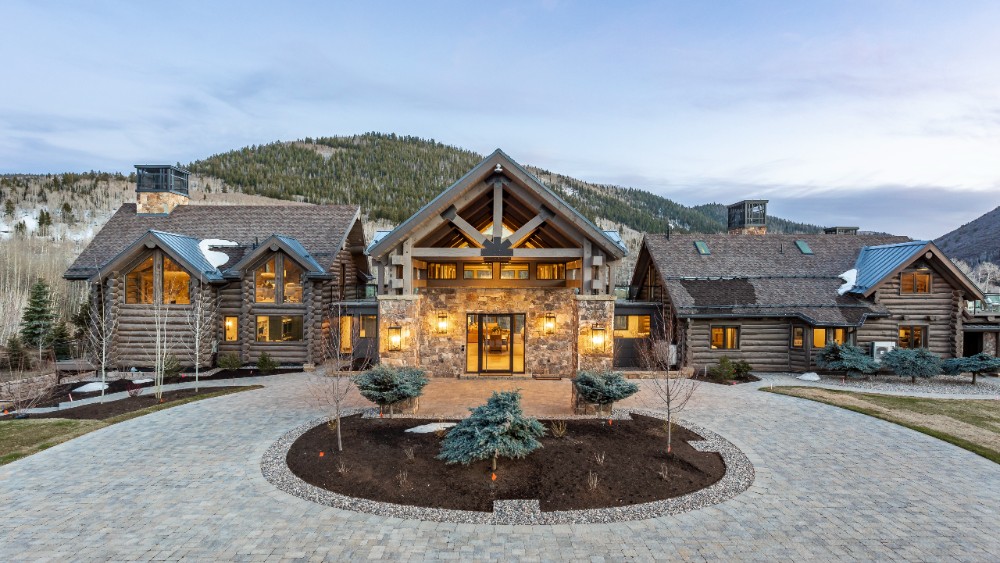 In our unpredictable times, it doesn’t hurt to have a backup plan. While the seller of this sprawling compound, who wishes to remain anonymous, might not be a doomsday prepper, all of the safe rooms and spy-like features in his residence serve a purpose.

A cabin might conjure up images of a quaint log home, but this Utah residence at 7600 E. Deer Knoll Drive is anything but simple. Located just 40 minutes outside of Park City, the place—which took four years to complete—spans 12,377 square feet, which includes the detached garage and the main residence. The latter has six bedrooms and 6.5 bathrooms, and a bunk room featuring multiple queen-sized beds—perfect for a large family with young kids or a multi-generational family with grandchildren. The detached garage connects to the main house via a 160-foot underground tunnel, whose design was inspired by an old mine shaft from when Utah was a mining hub in the mid-19th century.

The home has large windows that overlook the 50-acre property.  Kerry Oman and Thomas Wright of Summit Sotheby's International Realty

“The owner really likes to snowmobile, and the detached garage is where he typically stores his snowmobiles and off-road vehicles,” says co-listing agent Kerry Oman with Summit Sotheby’s International Realty. “When you come home and it’s snowing or raining or you simply don’t want to walk outside in the elements, you can use the tunnel. It’s one of the neatest structures ever and made using reclaimed wood. It also has heating and air conditioning.” However, even if you walk outside from the garage to the residence in the thick of winter, you won’t encounter much snow, as all of the driveways are heated.

Being so close to Park City, the home enjoys easy access to world-class skiing, dining and hotels, but you feel worlds away. The 50-acre property actually encompasses five lots—so the future buyer could build four additional homes or structures—and it is bordered by the Uinta National Forest, which has over two million acres of unspoiled land. The closest neighbor is about half a mile from the edge of the property, so you feel completely in your own world. The home was build as a second residence for the the owner and his family (they live nearby), and Oman says he chose the location for its proximity to fly fishing on the Provo River, snowmobiling terrain and other outdoor pursuits.

The seller designed a modern log cabin in the heart of nature, but his goal was always to capitalize on current technology in an effort to be completely off-the-grid and have a home that is totally self-reliant. There are three sources of power, including eight 41 kilowatt solar arrays that produce enough power to fully operate the home; 300 kilowatt hours of battery backup; and a commercial backup generator, should all else fail. This also includes its own septic system, six 1,000-gallon propane tanks, a commercial water filtration system, 1,000 gallons of water storage and several wells throughout the property.

“Power is available in this location, but the knowledge and comfort level of being able to be off the grid was important,” Oman says. “Not that they are expecting anything to happen, but they wanted to have that full capability.”

Erin Eldredge, co-listing agent with Summit Sotheby’s International Realty, says the battery storage is significant, and they did a lot of preservation outside of the battery power in terms of sustainability.

The logs used for the home’s construction came from the nearby canyon and local forest in an effort to incorporate the local surroundings. They were shipped to Idaho to be hand-carved before they were brought back on site and reassembled into the structures you see now. They also used lots of reclaimed wood, like in the tunnel, bunk room, doors and some cabinetry.

“They spent a lot of time on the home, especially with the logs in general,” Eldredge says. “It’s really unique to find a log cabin that has this modern aesthetic. Often with cabins you see a rustic orange feel, but they were able to pull out this neutral tone without painting it. They went through numerous processes to be able to get it that way. To complement this, they hand-selected every finish and material from the wall coverings to the floors to every stone used within the home.”

The owners also bought the land with an existing structure, and instead of tearing it down, they renovated it and built around it. The original structure now houses one of the living areas and one of the seven fireplaces. Each room feels cozy yet spacious, made warm and inviting by sumptuous materials, vaulted ceilings, wide living areas and plenty of natural light. The large windows perfectly frame the surrounding mountain views. Of all the rooms, the primary bedroom is most impressive. Not only is it supported by massive single logs, but it has a loft-style seating area on the second level, a wood-burning fireplace and a massive volume of space that makes it feel even larger than it is. The primary bathroom has a beautiful copper tub overlooking the surroundings.

The home was also built for entertaining, as evidenced by the modern kitchen and the fabulous dining area that connects to even more living room space. Meanwhile, hotel-like amenities can be found on the lower level, which has a movie theater with state-of-the-art technology and an in-ground hot tub that could easily be mistaken for a pool because of its size. There’s even an automatic dehumidification system.

“It’s a really, really big hot tub right across from the theater,” Oman says. “You could actually sit in the hot tub and watch a movie.”

There’s also a game area on this level and another massive game room or party space on the second floor of the detached garage. There’s even a garage in the main house that can house three vehicles. Perhaps one of the coolest features is the vaulted safe room, secured with double reinforced concrete; it has a bathroom, fridge and houses the home’s security. Oman says that a private gate is currently being added to the front of the home and there’s also the Savant smart-home technology, which controls lighting, climate, entertainment and security features.

The private underground tunnel connects from the garage to the main house.  Kerry Oman and Thomas Wright of Summit Sotheby's International Realty

“The safe room serves a couple purposes,” Oman says. “One, hunting is a big thing here in Utah. People with guns need a place to lock those up, so it acts as a safe location to keep firearms. It also houses the property’s extensive security system, which includes cameras that are wired into a central hub and can be controlled from the safe room. You can keep anything in here, like precious documents, but you can also go down and close it off in the case of an emergency. That’s not really why they built it, but it’s just more of a secure location.”

The other amazing feature is the private helipad just next to the garage. Whether for recreation or for easier travel, the helipad makes it quick to go from Heber Valley Airport straight to the house. Of course, the outdoors are always right at your doorstep. In addition to the surrounding nature, there is 4,000 square feet of deck space to enjoy sunsets and outdoor dining. Eldredge says that while the owner never had horses, there are plenty of spaces to build a barn and other equestrian structures.

The home is being sold completely turnkey with all furnishings, fixtures and decor.

Check out more images of the property below: