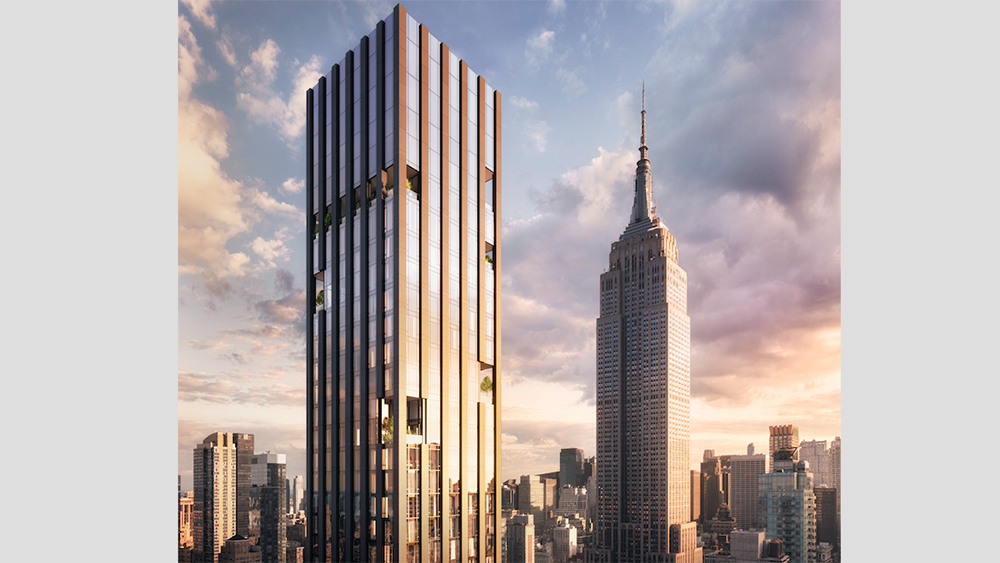 If you’re going to live in the tallest residential building on Fifth Ave, you may as well buy one of the uppermost residences and get the full experience. Luckily, it’s now up for grabs: the Rafael Viñoly-designed 277 Fifth Ave has just unveiled its penthouse unit, with a lofty price tag to match that 720-foot altitude. The residence can be yours for a cool $24 million.

Perched on the 54th floor, the penthouse occupies 4,520 square feet, with four bedrooms and four-and-a-half bathrooms. Panoramic views stretch from the Hudson to the East River, with the Empire State Building on full display from the sheltered, 780-square-foot loggia. Floor-to-ceiling windows run along the great room, where 14-foot ceilings give the unit an even stronger sense of space. The master has exclusive access to its own sector of this balcony, as well as its own walk-in closet and master bath.

Hadas Dembo of Mise en Scène Design did the staging for the space, which she envisioned as the home of a serious collector. To that end, Dembo filled the penthouse with statement furnishings and artworks that one might showcase in such a grand venue: A pair of reupholstered Joaquim Tenreiro chairs sit alongside a Jose Zanine Caldas seat in the great room, with clay-like Rogan Gregory light fixtures hanging above. An Ed Moses painting hangs in the dining room, and Wendell Castle pieces (a table in the great room, a lamp in the study and a chair on the loggia) run throughout.

The impetus, naturally, was the Viñoly architecture. “I’m not designing in a vacuum. I try and build off the foundation that was laid for me,” Dembo tells Robb Report. “Because the building was so tall, it didn’t feel so residential to me when I first walked in. I wanted to make it feel more organic with these furnishings, which are low, to make the ceiling height that much more palatial.”

As for Viñoly himself, per the developers, the architect was one of the first to come on board to the 277 Fifth project, which, coincidentally, sits up the street from his other NYC residential building, 432 Park. “His work spoke to us, especially when it came to the way in which he uses proportion,” says Ran Korolik, executive vice president at Victor Group, who co-developed 277 Fifth. “It’s not so high that the clouds surround it, but I can still see it every morning when I drive through the Holland Tunnel from New Jersey.”

Penthouse owners will also have access to the building’s amenity spaces, which, like the lobby and apartment finishes, were designed by Jeffrey Beers. These include a dining room, lounge, children’s playroom and gym. A spiral staircase connects the health and well-being components to the entertaining spaces, which occupy the fifth and sixth floors of the tower, respectively.

But the developers posit that the greatest amenity is the central location—even they’re a bit giddy about it. “These days, developers don’t have many opportunities to build on Fifth Ave.,” adds senior partner Scott Walsh of Lendlease, who co-developed 277 Fifth with Victor Group. “It’s really the quintessential avenue. The city is at your doorstep.”

Check out more photos of the penthouse, below: