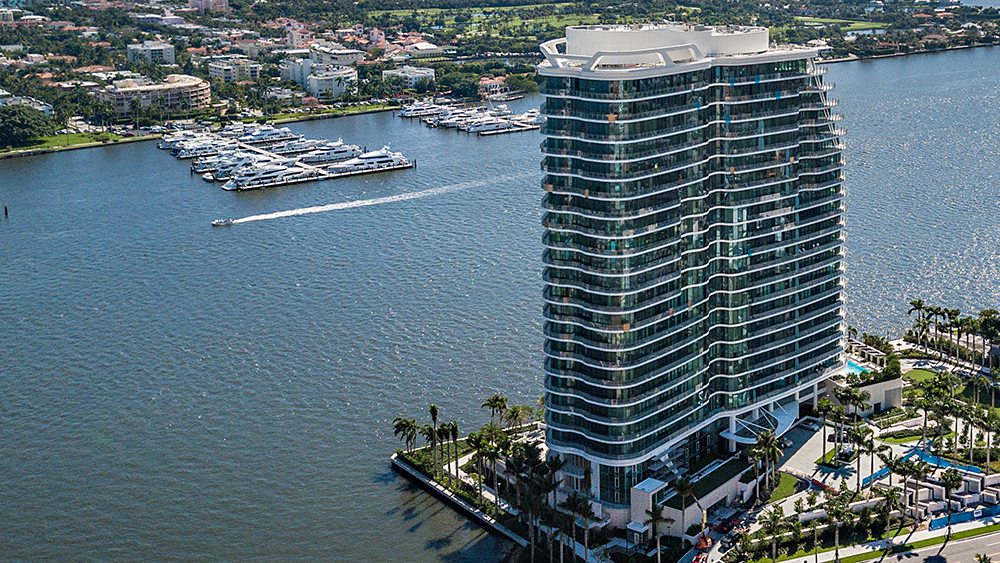 For many Lily Pulitzer-clad Palm Beachers, the simple act of driving across the Intracoastal Waterway into West Palm Beach is almost akin to entering some shantytown. To actually live there? Nothing less than social suicide.

But now the unthinkable is happening. The uber-wealthy are trading the manicured lawns and towering hedgerows of their sprawling oceanfront mansions for a luxurious condo in, yes, West Palm.

Drawing them like a magnet across the ornate Royal Park Bridge is the stunning new 24-story, 291-foot-tall Bristol, a shimmering glass condo tower at 1100 S. Flagler Drive.

Here, with unit prices averaging $10 million, residents are indulged with five-star luxuries, like his and her spas, a full-service beauty salon, on-demand massage therapists and manicurists, on-demand chauffeurs and a 24-hour doorman and concierge.

One amazing factoid from Chris Leavitt, executive director of luxury sales at Douglas Elliman in Palm Beach: 95 percent of the buyers at the Bristol so far have come from across the bridge, moved in from Palm Beach Island.

The full-floor unit on the 21st story.  Photo: Courtesy of Douglas Elliman

“The arrival of the Bristol has really taken away the stigma of living in West Palm,” Leavitt tells Robb Report. “Before the Bristol was built, Palm Beach residents definitely saw West Palm as a significant step down from the island. It has been a game-changer, letting people trade their high-maintenance homes and gardens for luxury condo living.”

What raised Palm Beachers’ eyebrows the most was when beloved local philanthropist and Matrix Essentials beauty products cofounder, Sydell Miller, sold La Reverie, her magnificent oceanfront mansion on the island’s “billionaire’s row” for $105 million in 2019.

She then promptly snapped up an 18,825-square-foot, whole-floor condo at the Bristol for a reported $42.56 million.

The condo is many shades of white.  Photo: Courtesy of Douglas Elliman

Now there’s a new crown jewel in the tower ready to lure another Palm Beacher off the island. Just hitting the market is this spectacular 21st floor, 10,350-square-foot, seven-bedroom, nine-bathroom “palace in the sky.” The asking price: $29.45 million.

“It’s all about the views,” says Leavitt, who’s the listing agent for the property. “From the residence’s amazing wrap-around balconies, the panoramic views across to Palm Beach Island, the Atlantic and up and down the Intracoastal are breathtaking.”

Right now, the residence is actually two units with plans to merge them together. The first is Unit 2101, with four bedrooms, five baths plus an office with 5,544-square-feet of interior space. Separately, it was on the market for $17.5 million.

Another view of the sleek kitchen.  Photo: Courtesy of Douglas Elliman

“The way the property market is in Palm Beach right now, believe it or not, $29.45 million for a residence like this with a total of 12,700 square feet of living space, is something of a bargain. The coveted higher floors at the Bristol are 100 percent sold apart from this, and inventory on Palm Beach Island itself has shrunk to almost nothing,” explains Leavitt.

A private elevator whisks you into the residence where you’re greeted with a sea of mirror-polished, 48-inch white marble tiles, stark-white walls and floor-to-ceiling glass with those jaw-dropping views. Kitchens and bathrooms are also shades of blinding white.

Down on the ground, there’s a separate two-car garage for the unit in the building’s high-security parking facility. There’s also a butler-serviced, 75-foot swimming pool and a state-of-the-art fitness center. The Bristol’s concierge reportedly came from the Four Seasons-owned Beverly Wilshire hotel in Los Angeles.

As for that on-demand chauffeur, the building has two luxury Mercedes Sprinter vans for airport runs, shopping expeditions to Worth Avenue, or rides to fine dining on both sides of the Intracoastal.

“The original plan was to have two Bentleys, but residents said they wanted to be able to take friends and family out to dinner and a four-seat Bentley just wasn’t big enough,” explains Leavitt.

For Palm Beachers suddenly out of luck in buying at the Bristol, there’ll soon be an alternative. Due for completion in 2023 is the 25-story, 83-unit La Clara, a little further south at 1515 S. Flagler Drive. With prices from $2 million, the penthouse is currently on the market for $17 million.

Just don’t expect to find La Clara’s sales center close to the main building site; it recently opened across the bridge in the heart of Palm Beach.

The balcony with its incredible views of the Intracoastal.  Photo: Courtesy of Douglas Elliman

The private garage within the parking structure.  Photo: Courtesy of Douglas Elliman