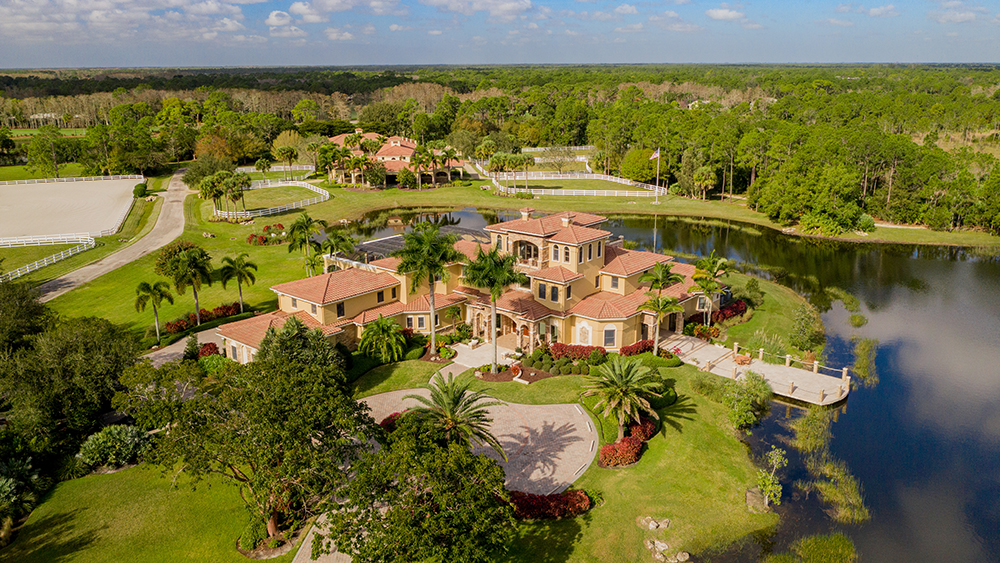 It’s not clear who will have the better lifestyle at this vast 30-acre ranch in Jupiter, Fla.—the horses or their owners. The Mediterranean-style stable’s architecture matches that of the house, giving you a clue that any horses corralled here are going to have a pretty sweet life. The property is currently listed for $13.85 million and will go to the block through Concierge Auctions on April 9. There’s also an opportunity to purchase an adjacent 20-acre lot, which is on the market for $1.3 million. The whole parcel will be offered at no reserve, meaning no opening bid minimum, to the highest bidder. There is a bidder deposit of $100,000 required, however.

The first level of the 10,700-square-foot stable is air-conditioned and has poured rubber flooring, improving comfort for your ponies. Eight spacious stalls give horses plenty of room. There are two large wash racks, an air-conditioned feed room and tack room with laundry and a full bath (for the humans). And there’s a large hay and shavings room, plus farrier area. Outside, the equestrian-focused grounds include eight irrigated, fenced paddocks; an automated fly spray system; three generous turnout sheds; a riding ring and a practice jumping bank. Plenty of trails crisscross the 30 acres and connect to the horse community’s other trails.

The property is part of the gated Ranch Colony, known for its equine friendliness, and it has plenty of space for the humans, too. The main house includes eight bedrooms (five of which have en suite baths) and eight bathrooms in its nearly 12,000 square feet. There are more than enough places to grab a snack or mix a drink, with wet bars in several rooms and two separate indoor kitchens, as well as an outdoor summer kitchen. But the best spot to mix and sip that cocktail may be the third-floor observation lounge, with its bar, covered deck and balcony. The elevator will whisk you back down to the main level and the great room, where a loggia with a retractable screen leads to a pier on one of the ranch’s other standout features: a private lake, chock-full of bass.

The home also includes a large, fireproof walk-in safe with a separate gun vault, a total of four laundry rooms, a 1,000-bottle wine cellar and a billiards room. A heated saltwater pool completes the picture.

The estate has its own security gate and a few features that may not seem like they enhance the lifestyle, but they’ll certainly protect it: an on-site fire hydrant and extra hurricane-resistant construction that goes above and beyond the Miami/Dade country codes.

For guests or staff, the accommodations are plentiful, with a two-room apartment over the four-car garage, a one-bedroom unit on the second floor of the stable and a separate, nearly 2,000-square-foot guest cottage.

The home is just 30 minutes from Palm Beach and 45 minutes from another exclusive horse community in Wellington, Fla. The Ranch Colony area has its own airpark and is as much a golfer’s paradise as it is a rider’s, with two championship courses on-site, one of which, the Dye Preserve, borders the estate.

One of two kitchens in the main house  Photo: Courtesy of Concierge Auctions

The home has its own private lake.  Photo: Courtesy of Concierge Auctions