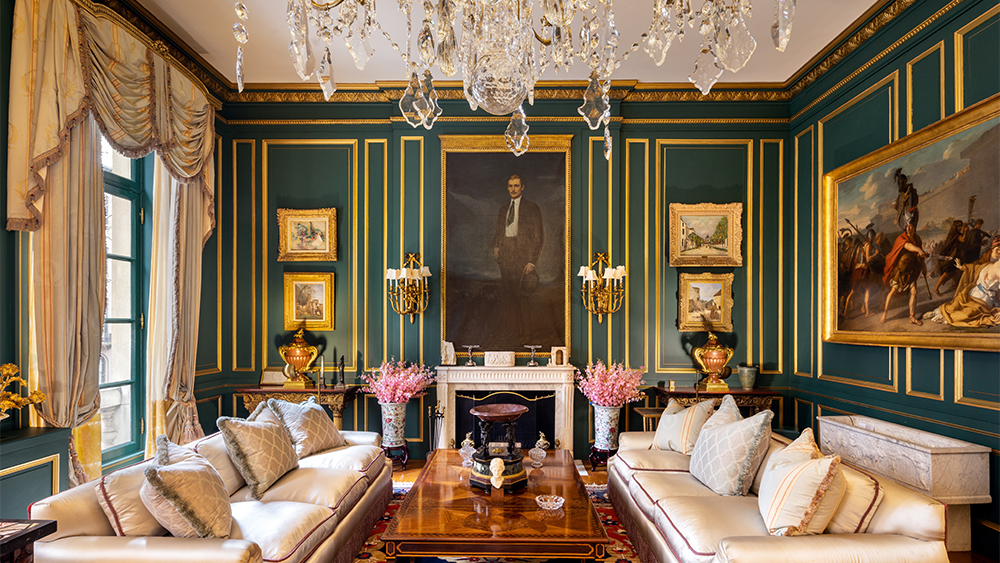 It’s not hard to spot the grand James F.D. Lanier house in New York’s Murray Hill neighborhood. After all, it’s one of the grandest, best-preserved Gilded Age mansions left in the city. The gem recently listed for $33 million, and the lucky buyer will be just its fourth owner in over a century—and technically only the second non-Lanier family member to own the house.

Located at 123 East 35th Street between Park and Lexington Avenues, the home was built by architectural firm Hoppin & Koen between 1901 and 1903. The structure is 33-feet wide—the size of two brownstone row houses—75-feet deep and 66-feet tall. It is instantly recognizable by its enclosed balcony with ornate cast-ironing railing, fluted Ionic pilasters, decorative window detailing and mansard roof with three copper-clad pedimented dormers.

The firm built the Beaux Arts-style home for wealthy banker James F.D. Lanier II and his wife, Harriet. Part of Lanier’s wealth was generated from his grandfather’s firm, Winslow, Lanier & Co., which was founded in 1849 and financed Thomas Edison’s development of the electric light.

The Laniers were New York socialites and were even listed as No. 137 and 138 on New York tastemaker Ward McAllister’s famous “Four Hundred” list. According to McAllister, only 400 people in society were worthy of being included on the list and, rumor has it, the number was derived from the amount of people who could comfortably fit in Mrs. Astor’s ballroom.

In 1979, the home was designated by the NYC Landmarks Preservation Commission, which means there are few things that owners can change; it is also on the National Register of Historic Places as of 1982. Property records show that the home stayed within the Lanier family until 1984. Luckily, the current seller has been committed to retaining nearly every last feature from when it was built.

“The current owner bought the home in 1984, and he was the third owner of the house,” says listing agent Edward F. Joseph of Christie’s International Real Estate. “When he bought it, he did an extensive three-year renovation that was completed in 1987. According to him, he spent $10 million, which is almost $20 million in today’s terms.”

The mansion spans 11,638 square feet and has nine bedrooms, seven bathrooms and three half-bathrooms over its eight levels. Through the renovations, modern amenities were added, including an oak-paneled elevator; a fitness center with a massage room, hot and cold plunge pools and a sauna; two offices; a 1,000-bottle temperature-controlled wine cellar; and a courtyard garden. From the rooftop, the views include the Empire State Building and Chrysler Building. There is also a separate staff wing with three bedrooms, two bathrooms and an office.

“All nine bedrooms can be considered primary bedrooms,” Joseph says. “Each bedroom has a fireplace and its own style. There is a mahogany staircase, as well as an elevator that goes to all the floors, from the sub-basement to the roof.”

Perhaps one of the most jaw-dropping rooms is the living room, featuring green walls with gold leaf wainscoting, parquet floors and 12-foot ceilings. It allows plenty of natural light thanks to the south-facing French windows and is equally as perfect to host a cocktail party as it is to curl up in front of the antique fireplace with a book.

While it’s hard to say which well-known socialites and prominent figures from the Gilded Age passed through these exact halls, the house is undeniably built for entertaining. Even stepping into the entrance hall, with its high medallion ceiling and classic statues lining the walls, feels utterly grand. The club room is another of the several lavish reception rooms apt for entertaining, and has a marble-topped bar, a marble fireplace and a 14-foot ceiling with an antique chandelier.

The white marble hall with a breathtaking chandelier  Evan Joseph

High ceilings, oak-paneled walls, carved stone fireplaces, gold leaf detailing and crystal chandeliers are just a part of the impeccable design and architectural details found within the home, while the outdoor areas feature ivy-clad trellises, stone fountains and tranquil gardens. Most rooms are flooded with natural light thanks to large Palladian windows. Suitable for large parties and intimate soirées, the dining room hosts up to 16 people and overlooks the garden. It was important back in the day for staff entrances to be discreet, so the dinner in here is served from the butler’s pantry, which has a dumb waiter and access to the service stairs and the kitchen.

“It’s not just another mansion, it’s a work of art,” Joseph says. “It’s a once-in-a-lifetime opportunity; you’re not going to see a house like this again.”

The home will not be sold furnished or with the majority of the art, valued over $1 million. Instead, Christie’s will offer a selection of works of art  from the James F.D. Lanier house in two auctions later this year. This year’s Antiquities sale will have 20 ancient sculptures, including a Roman marble Apollo and a Roman marble torso of Athena, among others. In December’s Tiffany’s sale, nine lamps from Tiffany Studios, worth well over  $1.4 million, will be auctioned off from the collection.

Check out more photos of the property:

One of the home’s bars  Evan Joseph

There are nine bedrooms in total.  Evan Joseph