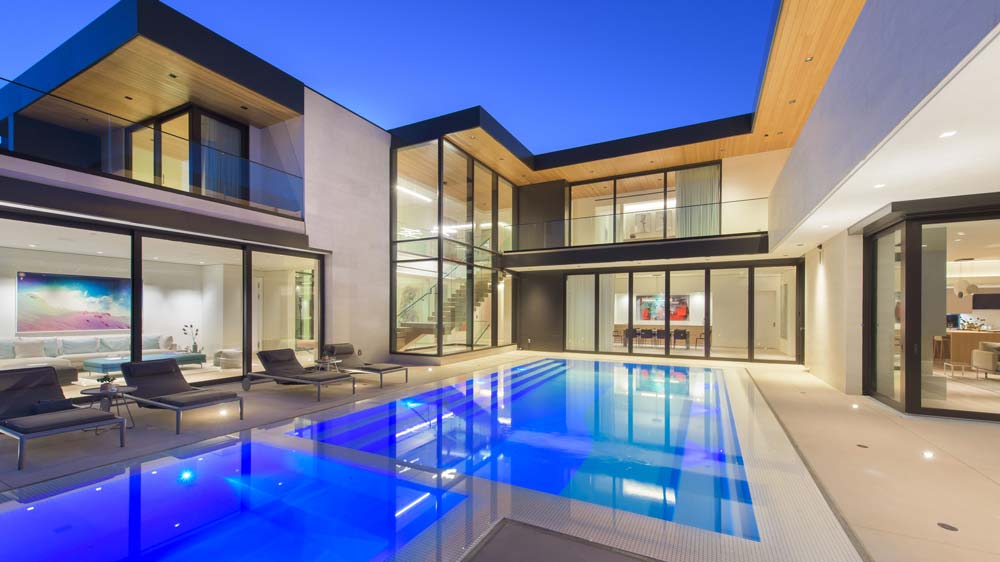 Seemingly just in time for Discovery Channel’s much-anticipated Shark Week (which kicks off on July 22), a Los Angeles spec home with a bona fide shark tank will hit the market next week. Developer Ario Fakheri’s aptly named Shark House, which is tucked into Doheny Estates in the Hollywood Hills, features a one-of-a-kind, 300-gallon shark tank. And while you’re not going to find any great white sharks here, the two-foot-deep tank is stocked with seven stingrays, one horned back stingray, three houndsharks, one remora shark, one horn shark, one catshark, one starfish, and three yellow tangs.

Homeowners and guests will have a front-row seat to the colorful aquatic show from areas such as a glass-encased, walk-in humidor room and a walkway leading into the 12,000-square-foot home. “Fakheri has been working on this house for four years, and the shark tank is one of those parts where you wonder ‘how did he think of that?’” says listing agent Sam Real of Nest Seekers International of the unique selling point.

Stepping stones usher residents to the middle of the open-air space, where a living wall designed by Habitat Horticultures (the landscape architect behind the San Francisco Museum of Modern Art’s living wall) serves as the backdrop. The verdant wall is made up of copper-velvet shamrocks, coral bells, spike moss, button ferns, and cranesbill flora to help lower the air temperature and insulate the interior. “This [wall] is the only of its kind because it uses a revolutionary wicking system to ensure irrigation is 100 percent efficient and can reduce runoff—making it eco-friendly,” says botanical artist David Brenner. “We used titanium steel in its construction to prevent corrosion from the saltwater of the shark pond below.”

In addition to the shark tank and living wall, the lower level features a tequila and vodka freezer (“inspired by Nic’s in Beverly Hills” Real says), a full bar, stadium seating, and a spa area. “The full wellness center has a plunge pool, current pool, sauna, and gym,” Real notes. “All the furnishings come with the house except the artwork. The stone used throughout is from Concrete Collaborative, and it’s the same kind used in the Getty. Everything is very unique and luxurious.”

There are seven bedrooms and 11 baths spread out across three levels (including a 2,000-square-foot master suite with his-and-her closets and baths and a walkout terrace overlooking the cityscape). A private elevator connects all three floors. Outside, a swimming pool and oversized hot tub await. And, of course, if you need a place to watch Shark Week, there’s a posh screening room.

The home will be listed for $35 million.