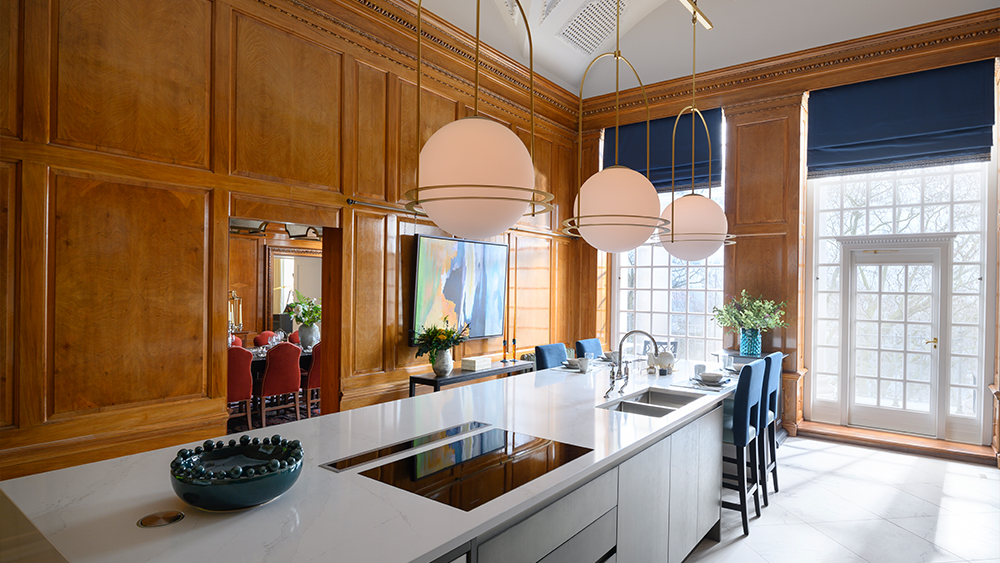 9 Millbank truly captures the essence of British style. Home to 1920s industrialist offices that have been transformed into sumptuous apartments—including the manor home-style Conrad unit, just listed for $35.8 million—the Grade II-listed building, constructed between 1927 and 1929, is located in Westminster, what some might consider the epicenter of London. The residences overlook the River Thames and the Houses of Parliament, while landmarks like Westminster Abbey, Big Ben and Lambeth Palace are just a stone’s throw away. Even better, there are many pieces of history found within 9 Millbank, too.

The building itself is a small relic of London’s industrialist past. The Neoclassical structure, constructed with Portland stone, was built for Imperial Chemical Industries (ICI), one of the largest manufacturers in Britain’s history that made everything from paint and motorcycles to pharmaceuticals and explosives. In the 1940s, the building was partially occupied by the Board of Trade and the Ministry of Aircraft Production, before becoming a historically designated, Grade II-listed building in 1981.

The exterior of The Conrad betrays its history as an office building, but a new plush, detailed interior showcases the space’s transformation into a luxury residence.  9 Millbank

Started in 2018, the transformation from offices to residences was led by developer St. Edward in collaboration with several conservation specialists, as this was as much of a restoration project as it was a conversion. They painstakingly restored several original features throughout the entirety of the building and used the spacious proportions, high ceilings and large windows of the 1920s structure to their advantage in an effort to create large-format homes.

The Conrad is the first move-in ready residence available within the Heritage Collection and has listed for £27.5 million (approximately $35.8 million). The two-story home spans 7,219 square feet and has four bedrooms and five bathrooms. St. Edward transformed the former ICI boardrooms and directors’ dining halls into grand entertaining spaces; the Conrad’s dramatic, double-height reception room with 13-foot windows overlooking the river, for example, was a former boardroom.

The former secretary and postal rooms were converted into other spaces. “The smaller receptionist offices have been repurposed as en suite bathrooms,” says Yolanda Jacob, head of sales at 9 Millbank. “The windows that would have looked out on the hallway have been retained, but in place of glass, antique mirrors have been installed for necessary privacy. Some of the doors that would have linked the offices together have been permanently closed off so the bedrooms remain private from other areas of the apartment.”

The living room has a grand, double-height ceiling.  9 Millbank

The lower floor features the living area, kitchen and grand dining room, while the upper floor has an informal living area, staff quarters and a members’ club-style bar hidden away in the former eaves of the building. This small bar area, which can also act as a game room, was only discovered when construction began and wasn’t factored into the original floor plan, which makes for an exciting bonus for the buyer of the Conrad. The two floors are connected via a gold spiral staircase.

“There are also hidden doors for storage that you might not even notice,” Jacob says. “These small doors in the wood paneling used to house the communication system for the building in the 1930s.”

The hidden bar area in the eaves of the building.  9 Millbank

One of the biggest draws to the Conrad is the massive 98-foot terrace (its total outdoor space measures 593 square feet). The river-facing terrace features a colonnade of Portland stone, and each column was reinforced with steel to meet today’s safety standards, then re-clad in Portland stone. All of the bedrooms connect to the terrace. Thanks to the large windows, the apartment is also flooded with natural light.

“The team went to the same quarry the stone was originally sourced from in the 1920s to ensure an exact match,” Jacob says. “This process took approximately 18 months.”

Beneath the terrace are eight busts of influential scientists and innovators, a nod to the building’s former life as ICI headquarters. These include Alfred Nobel, founder of the Nobel Peace Prize and inventor of dynamite; Joseph Priestly, chemist and theologian who discovered oxygen; and Alfred Mond, ICI founder and chairman. There are nods to London everywhere too: The terrace’s railings honor the area with small pineapple-like features that match the ones of Lambeth Bridge, which you can see from the terrace, and of the Church of St. John, located just behind 9 Millbank.

Interiors at the Conrad effortlessly mix modern decor with period-style architectural details, like ceiling cornices and timber panels. Interiors were designed by Goddard Littlefair, a renowned British designer known for his work at Gleneagles, Vienna’s Mandarin Oriental and the Mayfair Townhouse. The grand architecture is complemented by herringbone parquet flooring, rich leathers and silks and custom furniture. Littlefair worked with St. Edward to restore golden timber details, carved door frames above the kitchen and dining room, original timber paneling and more. He also worked with British suppliers to evoke a heritage feel, sourced from vintage and luxury specialists (including London Rug House) and commissioned bespoke lighting from Northern Lights and hand-painted floral patterned wallpaper from D’Arts for the living room. He also worked with art consultants Artiq to commission plaster art pieces.

“The design creates an ‘instant history’ where walking into one of the residences feels as though it has always been there,” Jacob says. “The studio had to respect and celebrate the heritage architectural features, yet soften them to provide a residential aesthetic. English heritage is evoked and revered through an opulent color palette of greens and blues, and chosen materials like plush velvets.”

A bedroom in the Conrad.  9 Millbank

All residents at 9 Millbank will have access to the Littlefair-designed amenity spaces, including the gym, pool, spa, cinema rom, meeting rooms, underground parking and a 24-hour concierge, who can arrange everything from an appointment with the best facialist in the city or a renowned chef for in-residence private dining.

The building will be fully complete by 2023. The Conrad is currently the only residence in the Heritage Collection ready for move-in (furnishings are optional), but other residences in the collection will start at £18 million.

The terrace by day.  9 Millbank

Another view of the kitchen.  Mel Yates

The en suite bathrooms were once receptionist offices.  Mel Yates