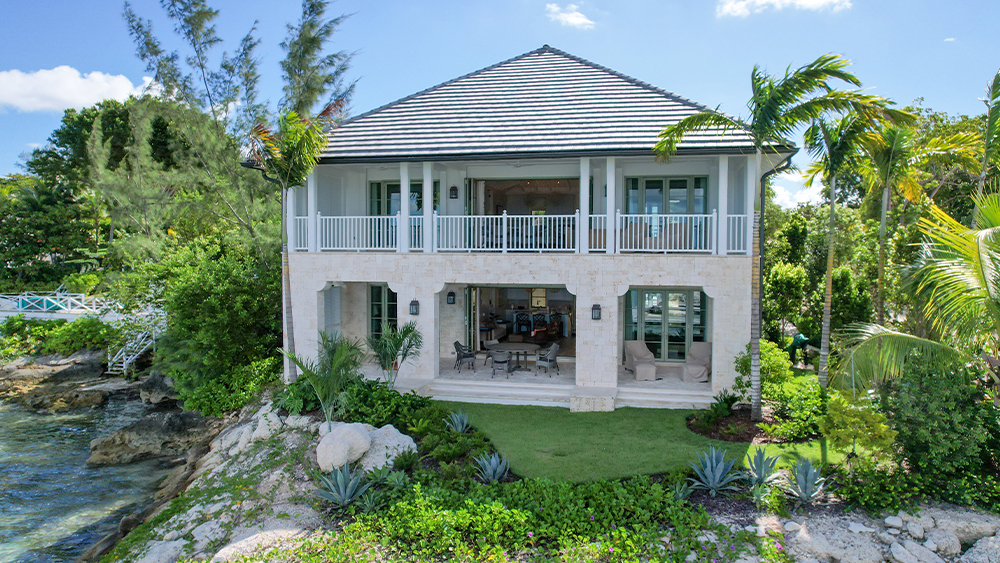 If you’ve been searching the high seas for an island utopia, consider this property paradise found.

A waterfront cottage in one of the most secluded parts of the Bahamas has just splashed down on the market. The home is located on Harbour Island, known for its stunning pink-sand beaches—and for being the most exclusive isle in the country. Part of what keeps the atoll so chic is its sensible approach to real-estate development—as illustrated by the Briland Club, one of the first residential areas on the isle created with an eye for attracting mega-yachts and their owners. The community is dotted with a few luxe abodes, including the new Cottage 1, now listed for just under $4 million.

Set just northwest of Eleuthera Island—a hearty 375 miles from Nassau—Harbour Island is hard to reach. And folks like it that way. Visitors must first arrive to the island of Eleuthera, which is a short flight or roughly two hour boat ride from the Bahamian capital. Then, a brief ferry ride awaits to whisk you away to the upscale tropical locale. It’s a journey, for sure, but you’re rewarded with a world that’s as far removed as possible from the cruise ships and tourist crowds that trudge through the Bahamas’ jam-packed main island. Indeed, best known for its wide pink-sand beaches, excellent snorkeling and pirate-era ruins, Harbour Island is remote, tranquil and very, very exclusive. No wonder Gavin Christie, owner of Corcoran C.A. Christie Bahamas, says “it’s often called the Hamptons of the Bahamas.”

“Folks often say that Harbour Island is a place where billionaires walk barefoot,” says Christie, an expert on the atoll.

Although not massive, Cottage 1 is a true beauty and ideal hideaway for both yachters and non-yachters looking for a dose of true tropical seclusion. Set directly facing the island’s yacht-filled harbor, the two-bedroom, two-and-a-half-bathroom, 2,100-square-foot home is designed to evoke the traditional indoor-outdoor Bahamian lifestyle and aesthetic. There are eight-foot doors, 10-foot vaulted ceilings crafted from Cyprus wood, floor-to-ceiling windows and large balconies for both cozy and not-so-cozy get-togethers.

But the most compelling detail is the cottage’s interiors, designed by renowned interiors ace Bunny Williams, who has created a move-in-ready design scheme suited from most tastes and buyers. Christie says Williams—who’s known for her luxurious-let-livable designs—was a natural fit for this project. “We approached the best of the best in each industry, and Bunny Williams is an Architectural Digest Hall of Famer,” he notes. “She implicitly understood how to integrate the old-world Harbour Island charm with modern day living.”

The home is constructed mostly from sturdy concrete blocks to withstand the Caribbean’s notorious hurricanes and with coral-styled detailing. Inside, each of the bedrooms comes with their own en suite baths along with access to the alfresco veranda for ample water views. “They’re great places to take in a sunset dinner or drinks,” Christie says. The rest of the open-plan home is anchored around an expansive, completely modern kitchen that flows to a large dining area and living room, which all face the balconies and the gin-clear waters just beyond. The home is not necessarily sprawling but ideally suited for deep-pocketed buyers looking for a slice of this still under-the-radar destination.

“Most of our buyers come from the East Coast, as well as Florida,” Christie explains, though he notes that Texas has emerged as a strong market, as has Britain. The island’s marina, he adds, is among the best in the entire country and appeals to yachters keen to dock far from the limelight.

The Briland Club is one of the first planned communities on Harbour Island and offers a turn-key, move-in-ready experience for buyers. Spread over 27 acres, it includes its own marina and members’ club, as well as its own bocce court, pickleball courts, golf simulators and access to the island’s famed pink sand beaches. Eventually, the Briland Club will include more residences, but for the moment a handful are now on offer to provide a dose of the relaxed Bahamian lifestyle literally at your front door.

“Harbour Island has long been known for its friendly residents, British West Indies architecture and diverse cuisine,” Christie says. “It’s a peaceful enclave where the world’s affluent come to disconnect, immerse in a new culture and explore the world famous pink sand beach.”

See below for more photos of this Bunny Williams–designed Harbour Island retreat: