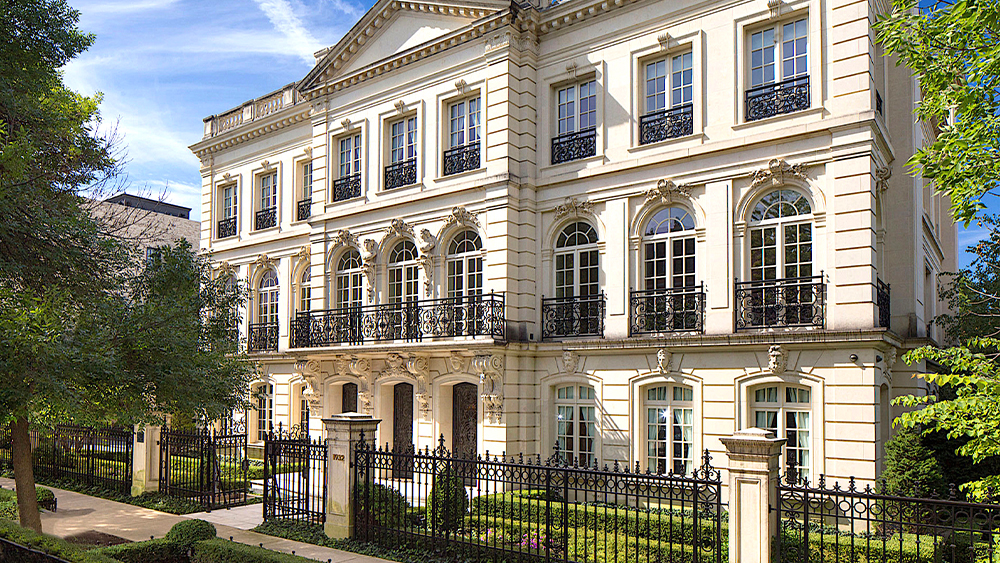 When you spend a reported $65 million to build the French-inspired mansion of your dreams close to downtown Chicago, naturally you ship-in tons of gravel for the driveway from France.

How come? French gravel, according to the owners, is said to “crunch” differently than regular driveway gravel, feeling more luxurious under foot.

Crunchy gravel was just one of the incredible lengths car insurance tycoon Richard Parillo and his wife Michaela went to in order to create this stunning 25,000-square-foot urban oasis close to Chicago’s historic Lincoln Park.

It began with Parrillo, chairman and CEO of Miami-based United Automobile Insurance Company and confirmed Francophile, paying $12.5 million in 2005 for eight 149-foot-deep city lots on one of Chicago’s toniest thoroughfares, North Burling Street.

By the time it was completed in 2010 at a reported total cost of $65 million, this spectacular three-story manse featured exquisite exterior stonework, delicate wrought-iron details, expansive gardens with multiple fountains, a reflecting pool and a hand-forged antique garden pavilion.

Inside it was laid-out with 18 rooms that include six bedrooms, seven full bathrooms, a music room, craft room, wine cellar and tasting room, seven fireplaces and an expansive office.

By 2016, however, the Parrillos had reportedly decided the house was bigger than their needs, and were spending more time at their winter home in Florida. So 1932 N. Burling Street was put on the market with a jaw-dropping $50 million asking price.

Had it sold for anywhere close to the asking, it would have set a new record for the city. Alas, it didn’t sell. And it didn’t sell for the next two years, when, according to Zillow, the listing was removed in March 2018.

After remaining empty for another two years, in February 2020 it was re-listed with a $5 million price cut, to $45 million. Which is where it sits today, with potential buyers being referred to listing agent Matt Leutheuser, of Jameson Sotheby’s International Realty, or his colleague Tim Salm.

“Absolutely no expense was spared inside or out throughout this sun-filled mansion. The home is nothing short of magnificent at every turn— truly a once in a lifetime opportunity that could never be replicated,” Leutheuser says in his listing, though he declined to offer any further comment.

But the sheer size of the Parrillo mansion, with its spacious, leafy 0.6-acre lot, should be enough to attract well-healed buyers—as should its money-was-no-object craftsmanship.

That included details like the magnificent marble spiral staircase, with its ornate black-and-gold-leaf wrought-iron balustrade, that soars upwards from the first-floor garden level to the third level. On the first floor, there’s a large reception room, sitting room, study and 20-foot by 23-foot games room. Multiple doors open out on to a large terrace overlooking manicured gardens, that long, narrow reflecting pool and the ornate, iron-framed gazebo.

For wine lovers, the home has a vaulted-ceiling basement with a wine cellar and adjoining tasting room, complete with a genuine Louis XIII fireplace imported from France. Meanwhile, up on the second floor, there’s a well-equipped kitchen, formal and informal dining areas and living rooms, plus a magnificent wood-paneled media room and bar. Doors here open out on to a vast entertaining terrace that runs the full length of the house.

Sotheby’s Leutheuser declined to provide any details (or images) of the third-floor bedrooms, citing privacy reasons, though like the rest of the house they are currently unfurnished.

As for that crunchy and no doubt very expensive imported gravel driveway, it’s reached through security gates off tree-lined North Burling and leads to a stand-alone three-car garage.

It’s anyone’s guess as to why this imposing home has failed to find a buyer, especially with its unique location. Of course, it could be down to that $45 million sticker. Right now, the home is priced almost $26 million higher than the next priciest listing in the Windy City—an equally magnificent 20,000-square-foot, six-bedroom mansion on West Burton Place, in the heart of Chicago’s tony Gold Coast. That home, however, lacks one key ingredient: genuine French gravel in its driveway.

Another view of the garden  Courtesy Jameson Sotheby's International Realty

The back of the home  Courtesy Jameson Sotheby's International Realty