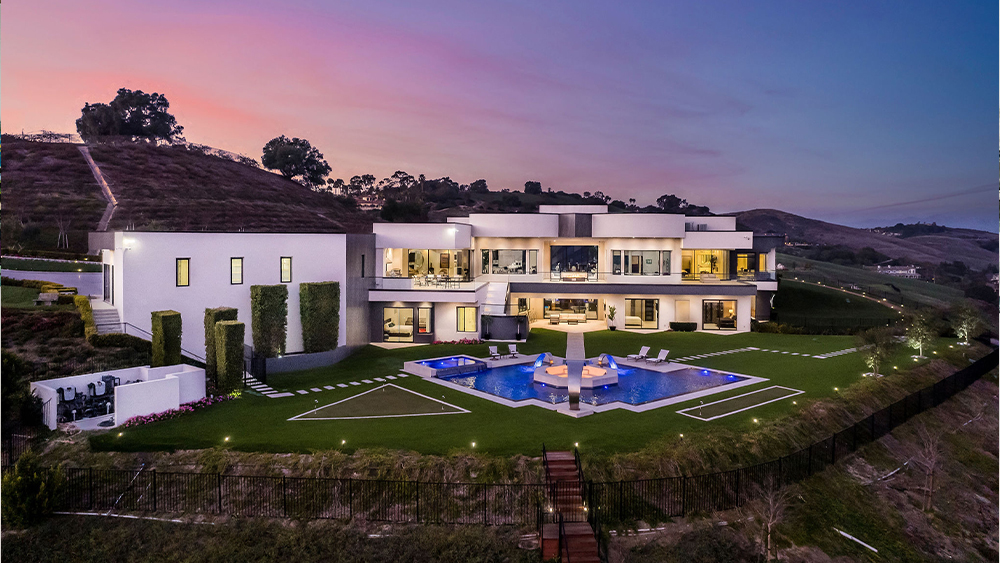 Even though this home is located within a community of over 260 homes, it’s possible you might never see your neighbors—and that was entirely by design.

SmartClixx founder Gary Dinkin and his wife, Lindy, were eyeing this hilltop parcel at 13 Old Ranch Road for some time before purchasing it and transforming it into their dream home between 2014 and 2017. The 13-acre piece of land has 360-degree views from La Jolla to Laguna Beach and overlooks all of Laguna Niguel in Orange County. It’s the largest parcel in the prestigious gated Bear Brand neighborhood and definitely the largest in Orange County with unobstructed ocean views. To put it in perspective, most of the neighboring homes cost $10 to $20 million less and are on just an acre of land. If sold for the asking price, this home will break the record as the most expensive sale in the area.

The $50 million custom-built home spans 14,500-square-feet and has six bedrooms, ten bathrooms and almost every amenity you can think of. It might be too large for the retired businessman, his wife and their two doodles (their two grown daughters live elsewhere), but it’s the ideal compound for a family that appreciates art, loves to entertain and enjoys the outdoors.

The 500-foot driveway leads you to a custom, geometric glass-and-steel gate that Mrs. Dinkin herself designed and continues to the circular motor court and a stunning porte-cochère (designed after the one at the Aria hotel in Las Vegas) that features one of the two Jon Seeman sculptures in the driveway, and has room for up to 30 cars. There’s also a separate eight-car garage.

“My wife and I are very much into art, and our estate is full of it,” Mr. Dinkin says. “In the front of our home, the porte-cochère has triangles that zig and zag out of it, and it was based on Israeli artist Yaakov Agam, who is known for his 3D paintings and sculptures. In the 1960s and ‘70s, Agam created something called the ‘Agamograph’ where from one angle it shows the painting and on the other side it shows something different.”

The kinetic facade looks totally different depending which angle you’re looking at; from one side, it looks like stone, and the other, glass. Designing the home was a labor of love for the Dinkins, who spent years perfecting every detail inside and out. For example, the ceilings have an array of shapes, including two hearts above the breakfast nook. The library ceiling features six triangles, one for each member of their family and their two dogs. Mrs. Dinkin says that although there are hidden symbols that represent her family and the love between husband and wife, anyone will be able to find their own meaning within these artful elements.

“The Dinkins are one of the most in-love couples I’ve ever seen,” says co-listing agent Matt Altman of the Altman Brothers at Douglas Elliman. “And everything about the house has been customized for their family and the trips they’ve taken. When I say custom, they enlisted many, many artisans to work on every detail of the home. Even the front door has won awards for its design.”

Mr. Dinkin says that he went through three architects who weren’t able to understand his vision. He and his wife ended up working on the architecture alongside a structural engineer and the city to get it built. He says everything about the home was meant to show unobstructed ocean views. However, it was just a barren hillside when they first purchased the property, so the Dinkins planted hundreds of trees, including orange, grapefruit, banana, nectarine and peach trees, and thousands of plants, like flowers and grapes and blackberries. He also created roads throughout the 13 acres that can be navigated on ATVs.

“It is really overwhelming how much land we have, and unless you’re driving it and going through it, you can’t comprehend the vastness of the property,” Mrs. Dinkin tells Robb Report. “It’s truly more like a boutique hotel experience than a house.”

Whether you’re in the gourmet chef’s kitchen or the living room, each room feels incredibly oversized and spacious, in part thanks to the Fleetwood glass windows and doors and 20 skylights throughout the house. The primary suite, for example, has glass-paneled walls that open to an ocean-facing balcony, a dual-sided fireplace, walk-in closet and impressive bathroom. The wood-carved doors to the bedroom were inspired by their travels to the Serengeti and feature a lion and lioness. They are hand-carved and made of three-inch-thick wood.

The pool has a 25-seat fire pit in the middle.  Joel Danto//Douglas Elliman Realty

When it comes to the amenities, the star of the show is the negative-edge pool, which has a spa and a center fire pit that seats 25. Nearby, you’ll find an outdoor BBQ area with a full kitchen and two putting greens. Meanwhile, inside there is a large bar, game room, Art Deco-style movie theater, gym, steam room and infrared sauna and a hidden wine cellar in a Spanish-Mediterranean style.

“It’s an anomaly,” Altman says. “There is no comparison.”

Mrs. Dinkin says the home was a true labor of love. “No matter where we go after this, we’ll never have anything like this again. We really put in just so much love, effort and time into this build.”

Another view of the pool  Joel Danto//Douglas Elliman Realty

There are thousands of plants.  Joel Danto/Douglas Elliman Realty