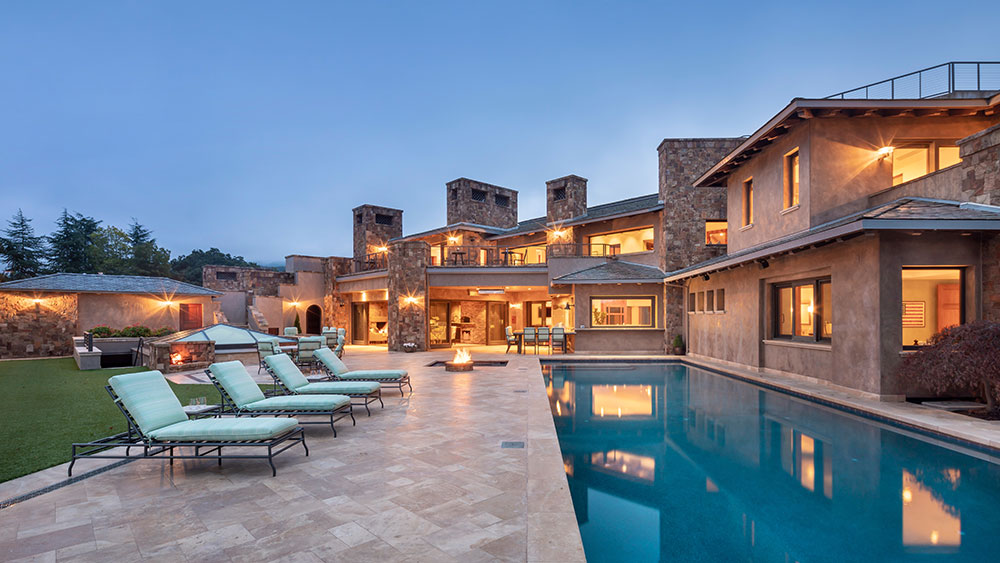 What do you put in a home that has everything? A hockey rink (obviously). That’s the thinking behind this mansion anyway, which just listed for $53.8 million.

On the outskirts of Palo Alto, the property is located between San Francisco and San Jose; its 13 plus private acres make it feel a world apart from the hustle and bustle of either city. The home’s perch at the top of a hill gives an added sense of seclusion, while simultaneously offering spectacular views of the lush surrounding mountains and valleys.

Sellers Scott and Susan McNealy—Scott was the co-founder of computer technology company Sun Microsystems based out of Santa Clara—chose to offload the home because they felt it was too big for them after their four sons had moved out. It is, admittedly, enormous for two—the 32,000-square-foot mansion has 20 rooms spread across its four levels, including five bedrooms and seven full baths.

Amenities within meet every need: a wine cellar, a two-tiered movie theater, a poker room, a billiards room and a spa with both a steam room and a massage area. Plus, there’s plenty to feed your athletic side, including a gym, a pool, a basketball court, a climbing wall and the 7,300-square-foot ice hockey rink. The rink can be converted into a tennis court, equestrian center or car collector’s garage by the future owner, should they not prove as enthusiastic about hockey as Scott McNealy—the businessman cited the icy sport as one of his favorite pastimes in a 2003 interview.

The kitchen.  Photography by Jacob Elliott

Outside, there’s a golf course, another favorite sport of McNealy’s, who was once the captain of the Harvard team. The setup at his old residence is a practice facility consisting of two greens, three traps and multiple tee areas. It was designed by celebrated golf architect Jay Blasi.

And the custom home was a labor of design love, taking seven years for California architect Thomas Jakway to complete. Jakway dubbed the home’s style “collapsed history,” meaning that it combines design elements of the ancient, modern and futuristic.

Naturally, the oversized digs lend themselves to entertaining, so if you want to have guests you over, there’s a separate guesthouse for that. And for unwanted visitors you’d rather keep out, the property has an entrance gate and its own safe room.

“The house deserves more activity than the two of us,” says McNealy of the decision to decamp. “Somewhere, another family waits in the wings.”

Check out more photos of the beautiful hideaway, below: