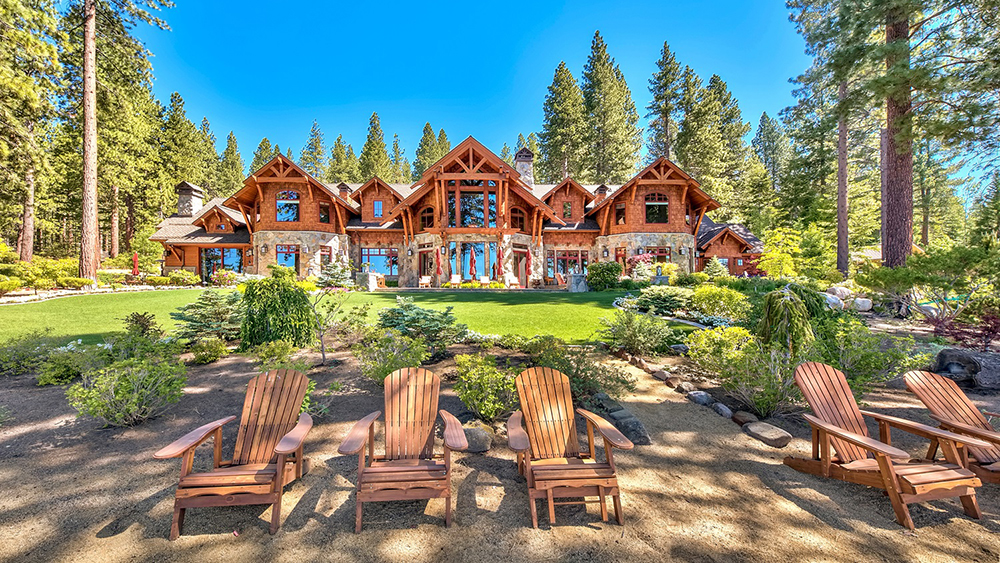 $60 million: That’s the jaw-dropping asking price for this spectacular 5.3-acre compound on Lake Tahoe’s coveted North Shore. If it goes for this amount, it would set a residential sales record for the Tahoe area.

What goes some way in justifying its sky-high sticker is its 313 feet of private lakefront, 12,679-square-foot main lodge—which has been designed to resemble Yosemite National Park’s legendary Ahwanee Hotel—and four-bedroom, 3,800-square-foot guest cottage. All that, plus a molten-hot property market in Lake Tahoe’s no-income-tax, low-property-tax Nevada neighborhoods of Incline Village and Crystal Bay. Here, average home prices have soared 45 per cent in a year, to $2.55 million, according to a market report from Compass Realty.

New buyers to the area include Facebook CEO Mark Zuckerberg, who recently bought two adjacent properties in nearby Tahoe City—one for $37 million, the other for $22 million. Fellow tech billionaire and former Oracle CEO Larry Ellison also quietly snapped-up a collection of four homes in Incline Village, each priced in the $15 million to $20 million range; he’s said to have plans to demolish them and build one massive compound.

But even among all those sales, “this residence truly sets a new bar for Tahoe and the Northern California market, with its unsurpassed location and evocative, historical California architecture,” listing agent Mary Kleingartner of Compass tells Robb Report.

Built in 2012, the estate is reportedly owned by investor and philanthropist Sean O’Neal and his wife Jennifer, who purchased the two-parcel lot on Lakeshore Boulevard—known locally as “Billionaire’s Boulevard”—for a reported $11.8 million in 2010. Back in 2014, just after the estate was completed, Mr. and Mrs. O’Neal gave a tour of their new digs to Tahoe Quarterly magazine. In it, Mr. O’Neal exclaimed, “I still pinch myself that I get to live here.” The couple named the compound Nagi Tanka, a Lakota phrase meaning “Great Spirit”.

A short stroll away from Incline Village’s tourist-thronged town center, private gates off Lakeshore Boulevard open onto a winding driveway leading to the main home’s imposing entrance. Step inside and you’re greeted by a full, panoramic view of Lake Tahoe’s sparkly waters.

The main living room features soaring 39-foot-high ceilings with massive wood beams and supports. A huge stone fireplace is the centerpiece of the room, which flows into the aptly-named Lakeview Bar. Here, the conversation stopper is the 10-foot trunk of local claro walnut tree that runs floor to ceiling.

Italian-inspired features have been incorporated in the kitchen and dining room, namely the impressive barrel ceilings with red brick veneer and five layers of Venetian plaster, painted to look like copper. The sprawling primary suite is on the ground floor and, naturally, boasts expansive lake views. The suite’s bathroom alone measures 30-by-21 feet, and there are also two huge walk-in closets and an adjoining office.

One of the bedrooms.  Courtesy Peter Tye/2View.com

Upstairs on the second floor are three additional bedrooms. If more friends and family are coming to stay, there’s also that stand-alone two-story guesthouse with four bedrooms, a living room, kitchen and dining room. At over 3,800-square-feet, there’s no shortage of room.

But arguably the home’s most impressive feature is its outdoor space. Wrapping around the main house is a 4,000-square-foot paver terrace with views over manicured lawns to the lake. And if that stone-ringed firepit looks vaguely familiar, it’s said to have been inspired by part of a set used at a Shania Twain concert the owners attended.

For boaters, there’s a long pier—because Lake Tahoe restrictions mean that even if your home is priced at $60 million, you have to share it with neighbors. But you do get your own boat lift, plus two coveted mooring balls.  The dock is perfect for jumping in your boat and heading over to the annual Lake Tahoe Concours d’Elegance, North America’s premier wooden boat show held every August on Tahoe’s West Shore.

Check out more images of the compound below: