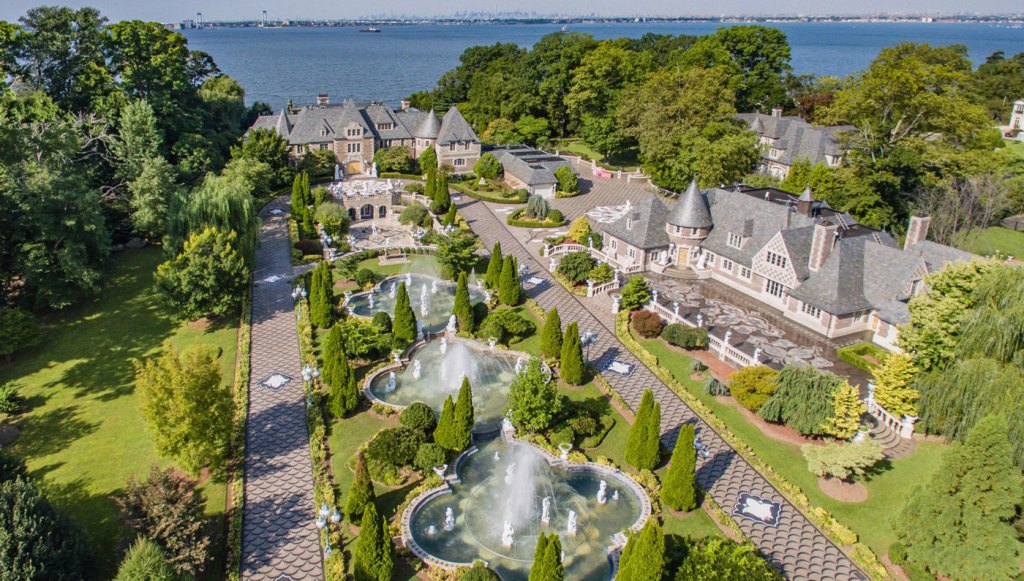 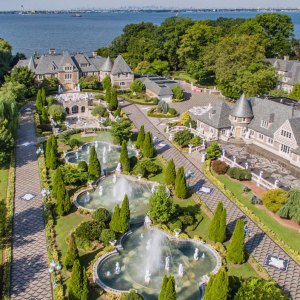 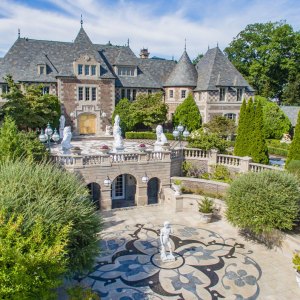 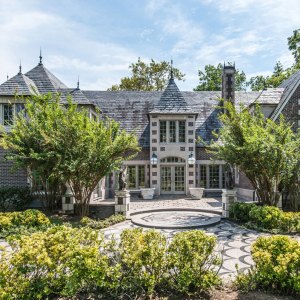 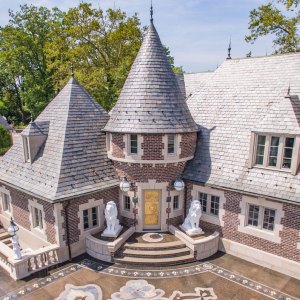 The opulent homes in the village of Kings Point served as inspiration for F. Scott Fitzgerald’s novel The Great Gatsby—and this one reportedly inspired the set design for the 2013 film. Diehard fans who long to throw legendary parties of their own will want to snap up The Estate at Kings Point, an eight-acre waterfront property about 45 minutes from New York City. Built in 1928, the glitzy, glamorous establishment would have made Jay Gatsby himself proud.

The immaculately manicured grounds showcase century-old trees, sculptured shrubs, and inlaid stone driveways. Fountains and statues (including a full-size replica of Michelangelo’s David) add old-world charm to the eye-popping estate. In the backyard, tennis courts and a stunning swimming pool outfitted with a cabana and swim-up bar are silhouetted by the water. A large dock that can accommodate a 200-foot yacht extends over Long Island Sound.

The estate features 18 bedrooms and 32 bathrooms, which are spread across the original mansion and two smaller mansions that function as guest homes. Bedecked with marble, malachite, lapis lazuli, gold leaf, and agate, the extravagant interiors were designed to wow. The main Estate House—which has six bedrooms, 11 bathrooms, and three half baths—is outfitted with everything from a 10-car garage to a 3,000-bottle wine cellar. Water-like marble inlaid with fish, floor-to-ceiling aquariums, and a sea medallion in the entry foyer create a sea theme, and a formal living room and dining room can effortlessly host a soiree or dinner party. The home is further equipped with a spa, sauna, hair salon, gym, racquetball court, wine vault, and lounge—all perfectly suited for Gatsby-style parties.

Showcasing five bedrooms, six bathrooms, and three half baths, the Carriage House offers an equally indulgent stay. A casino room, pool, Moroccan spa, two-lane bowling alley, and theater solidify the home’s standing as a bona fide party zone. The Rodney House (equipped with seven bedrooms, seven bathrooms, and two half baths) includes a great room with a fireplace, a formal dining room, an eat-in kitchen, and a den. The estate is currently on the market for $85 million—a small price to pay for an estate this epic. (laffeyintl.com)