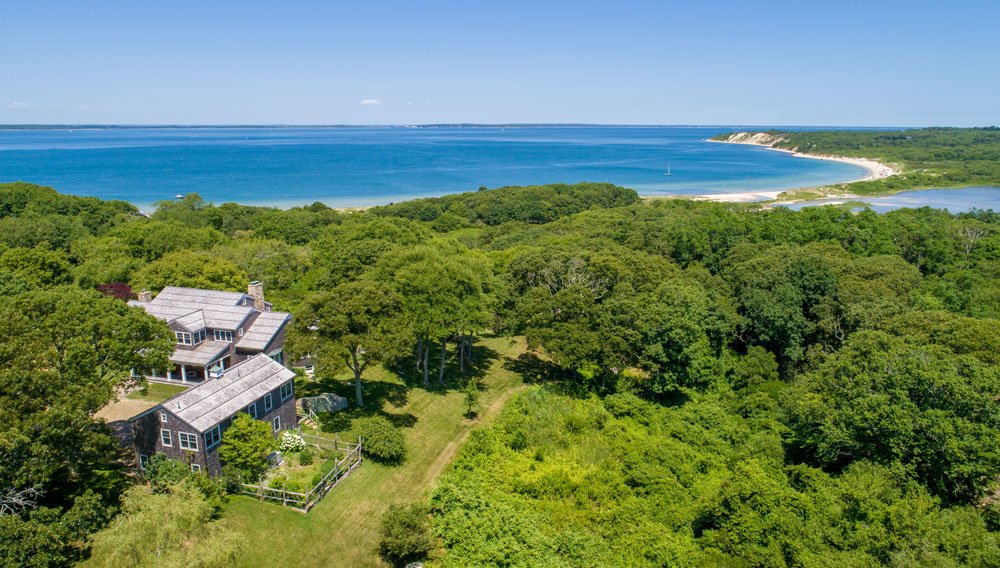 Discovered by an English explorer in the 1600s, Martha’s Vineyard is a popular New England summer escape known for its pristine beaches and freshly caught seafood. And while there’s plenty to love about the picturesque island, one of its greatest selling points is the rich history that seems to permeate everything from the storybook Victorian cottages to the imposing lighthouses. That history is on full display at the 186-acre William W. Graham estate in Lambert’s Cove.

In the 1970s, The Washington Post publisher Katharine Graham (the first female publisher of a major American newspaper and the subject of the Oscar-nominated film The Post) bought the plot of land to keep it from falling into the hands of developers. The estate was later owned by her son, William Graham, a philanthropist who worked tirelessly to preserve the property. Overlooking James Pond, Buzzards Bay, and the Elizabeth Islands, the estate is a picture of paradise in every way. Currently divided into seven parcels, the property represents an ecologically diverse treasure trove of woodlands, wetlands, shoreline, and meadows. Wildflowers, twisting pathways, restored stone walls, and a bubbling brook create an outdoor haven that is sure to soothe residents and guests alike.

A two-story, eight-bedroom main residence with panoramic views of the Atlantic Ocean anchors the estate. A three-car garage with an apartment, a two-story caretaker’s home, a barn, and a one-bedroom beach house on Lambert’s Cove Beach round out the amenities. Katharine Graham’s former home, known as Mohu, is located near the property but is not part of the listing. Should residents want to explore the surrounding area, there are plenty of sandy beaches as well as a crop of new restaurants worth checking out on Martha’s Vineyard and nearby Nantucket.

The property is being offered by Landvest, which is Christie’s International Real Estate’s official affiliate on Martha’s Vineyard. The proceeds will be divided among several charities.