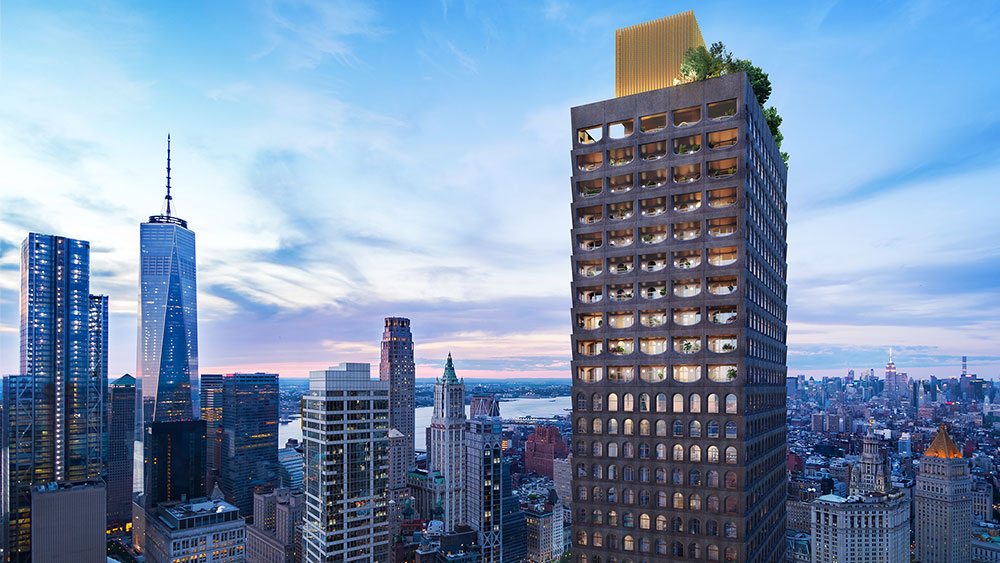 The finishing touches are still being put on 130 William, Sir David Adjaye’s residential project in Manhattan’s Financial District, but there already seems to be plenty of incentive to buy. Not only are the luxury residences on the 59th and 60th floors a first-time collaboration between Adjaye and Aston Martin, each unit comes with a limited-edition, custom DBX.

First, though, the homes themselves: There are five in total—two penthouses, three loggias. Both models will have an outdoor area spanning the entire length of the residence; all feature pieces by Aston Martin Home, with leather sofas and armchairs that evoke the interiors of a classic AM auto.

Each of the Aston Martin residences will have ample outdoor space.  130 William

The kitchens are equipped with Gaggenau appliances, and the primary bedroom includes spacious walk-in closets. But it’s not all laid out for you—buyers have the option to customize a portion of the residence to their liking. One of the rooms can be an office, a bedroom or, for driving enthusiasts, it can be home to a racing simulator developed by Aston Martin and Curv Racing Simulators, a company founded by Darren Turner, a three-time class winner of the 24 Hours of Le Mans.

All fine and great, but what about that DBX? Adjaye’s collaboration with the brand marks the first time that Aston Martin has ever worked with an architect on one of its signature vehicles, and the results don’t disappoint. Some of the inspiration is actually derived from 130 William—the seats have a green trim that matches the racing simulator’s, and the dark paintwork is reminiscent of the building’s façade. It’s also the first time Aston Martin has worked with stone accents, pairing marble inlays with walnut to give the whole thing a luxe, bespoke feel.

And those are just some of the many amenities that 130 William has on deck. Residents of these Aston Martin homes will have access to the building’s infinity-edge swimming pool, fitness center and spa, yoga studio and basketball court, golf simulator, pet spa and IMAX movie theater.

See more photos of 130 William and the DBX below:

One of the primary bedrooms.  130 William