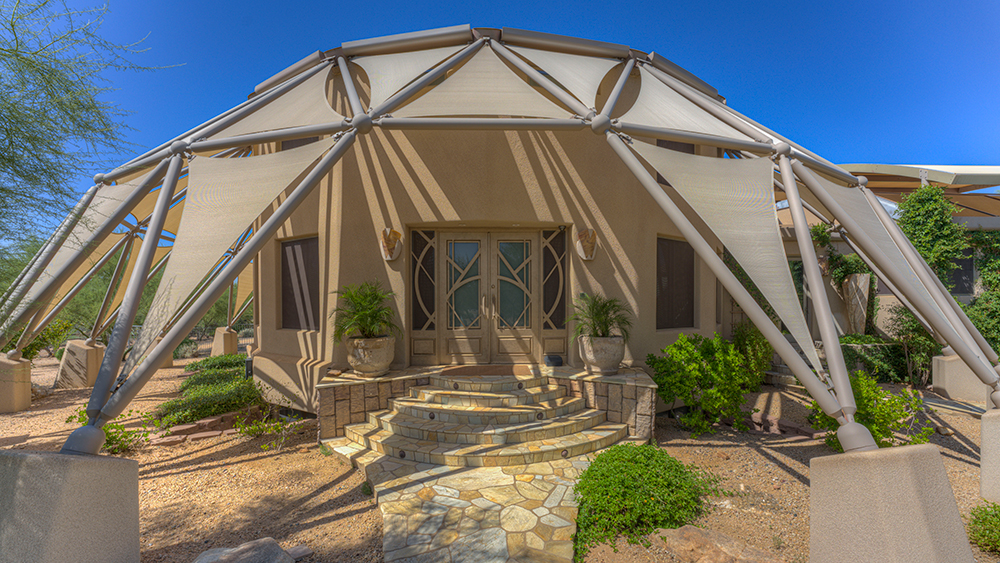 Some homes just don’t look like the others. A property dubbed the Desert Dome in Scottsdale, Ariz., is a prime example: The home is ensconced in aluminum panels, giving it a futuristic look that certainly sets it apart from its neighbors. Those interested in the distinct property are in luck, as it’s just hit the market for the first time ever for $3.7 million.

The home was originally designed by architect Wayne Young, a principal at Young Architects, in partnership with local builder RD Hendrickson. Its dome-like structure was constructed in 2000 and resembles standout buildings such as the Epcot Center at Walt Disney World Resort in Florida and the Amazon Spheres at the company’s office in Seattle.

Altogether it’s an approximately 9,500-square-foot property, with six beds, seven baths and one half-bath. The main level blends indoor and outdoor living by opening out onto the patio, and the basement level includes amenities such as a home theater, a fitness room and a wine cellar. On the uppermost level is the primary suite, which includes a home office space for the work from home set.

The property sits on five acres, with plenty of space for outdoor activities. The home has a circular pool, a dining area with a fire pit and a separate guest house—the latter was designed by architect James Hann and has been published in local magazines. According to the listing, the site itself maximizes natural light and mountain views, so there’s plenty of natural beauty to appreciate here in addition to the striking architecture.

There’s a sustainability element to the home as well, as the listing claims “extensive measures have been taken to live in harmony with the local desert.” The home has solar panels, for instance, so it can generate at least some of its own energy.

One of the bedrooms  Photo: Russ Lyon/Sotheby’s International Realty

Of course, while it’s certainly home, this kind of out-of-the-box look won’t be for every buyer. But if you’re looking for something different or a showpiece residence to brag to friends about, then Desert Dome will certainly do the trick.