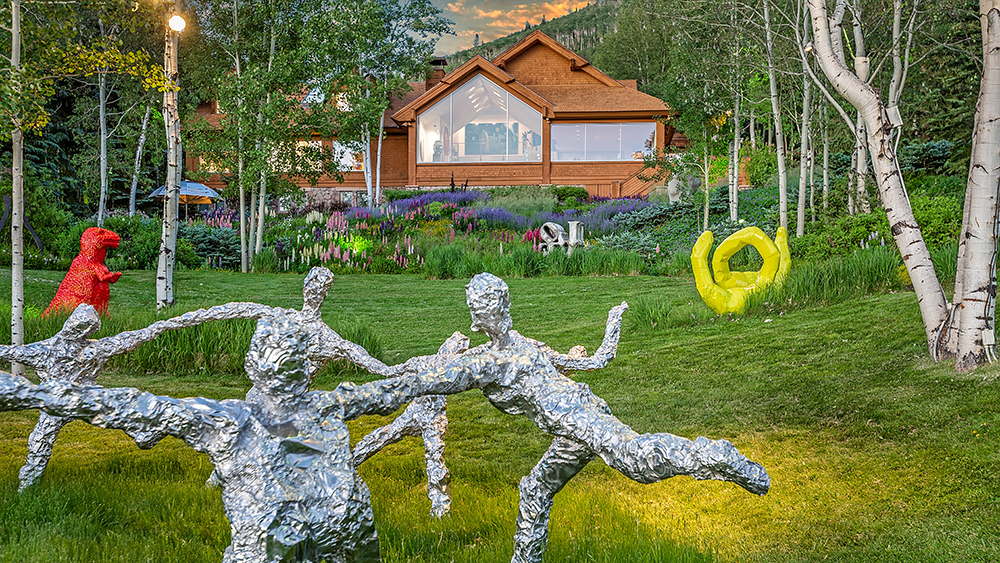 Most splashy homes in Aspen double as ski chalets. They’re more vacation home for carving up the slopes every season than a place where you hang your hat—much less your priceless art. Not so for one $12.9 million offering, which sits in the heart of Starwood, a private enclave that’s among one of the only gated communities in Aspen. Unlike many of its neighbors, its 9,560 square feet are dedicated to the seller’s extensive art collection—to say nothing of the two acres of space outside, which houses a sculpture garden of more than 30 different works.

The digs are owned by Nancy Magoon, the daughter of New York real estate developer Jack Parker. A board member of the Aspen Art Museum and an honorary trustee of the Perez Art Museum, Magoon’s passion for contemporary artwork is evident in every corner of this seven-bed, seven-bath home. The light-filled living room, for example, has a spectacular window that looks out onto the sculpture garden and Damien Hirst’s Shield of Achilles (2010) hangs from the wall. In the master suite there’s a portrait of Magoon herself, which was reportedly painted by Andy Warhol at 3 am after a party in Miami.

And if you’d like a personal tour of the place, then you’re in luck. Robb Report recently got an inside look of Magoon’s home in a recent episode of “Home Tours” on Instagram:

Take a tour of this dreamy Aspen property courtesy of @jenengelaspen and @marianlansburgh.

The catch, of course, is that none of Magoon’s extraordinary collection comes with the house. There are a few exceptions to this rule, though, most notably the various denizens of the sculpture garden, which are now so much a part of the property that Magoon is willing to part with a few. The price, however, will not be included in the $12.9 million asking. Inside, a frieze of unborn baby animals by Argentinian artist Nicola Costantino is a buyer’s perk, as Magoon won’t be able to take it with her. (For obvious reasons.)

The great room, which looks out onto the sculpture garden and mountains.  Douglas Elliman

But while Magoon used the home as a white-wall gallery, it’s a property that can easily be reimagined for a family or as a bachelor pad. Downstairs, just off the great room, is the master suite, which consists of a spacious walk-in closet, master bath and a private office. The kitchen, meanwhile, is completely decked out in stainless-steel finishes—both appliances and cabinetry—with an adjacent dining area that overlooks the hills (and sculptures) below.

The entrance. The owner bid on farm doors at auction but lost, so she had an artist replicate them for her home.

On the upper level, which overlooks the great room, are the guest rooms. The gym and children’s playroom are in a separate wing. Part of this section is currently dedicated to Magoon’s artworks, but it can easily be repurposed by the future owner to be another, cozier living area.

Another view of the art-filled great room. To the left is Hirst’s golden “Shield of Achilles” (2010). On the shelves is a collection of prehistoric pottery.  Douglas Elliman

Outside, a stream runs through the sculpture garden, and a stone pathway leads visitors through it. Two bridges pass over the stream at different intervals—views of the Elk Mountains are just beyond. Plus, for a total of $16.9 million you can buy the adjacent lot, adding an additional two acres to the package and doubling your outdoor space.

A skylight lets the sun into the great room.  Douglas Elliman

So whether you consider yourself a collector or not, this secluded Danielson Drive address is nothing if not a standout in the Aspen marketplace. Check out more photos below:

Another view of the sculpture garden, with the colorful “Made in China” (2005) dino by Chinese sculptor Sui Jianguo front and center.  Douglas Elliman