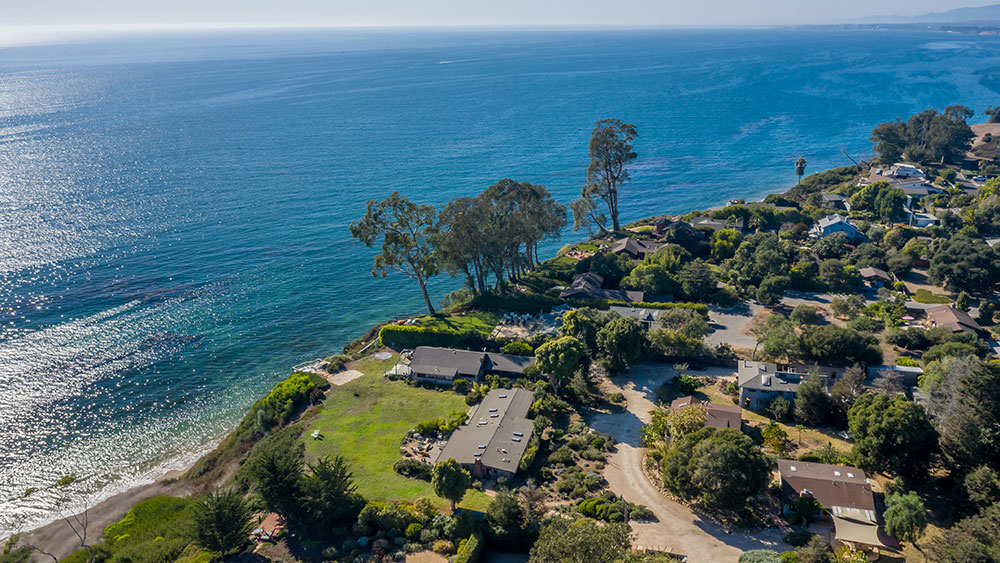 Wouldn’t it be nice to live in the sprawling Santa Barbara clifftop estate once owned by the Beach Boys’ co-founder and lead singer Mike Love?

And with no fewer than five cottages to chose from, you could certainly have fun, fun, fun just sitting out by the fire pit, gazing over the rolling Pacific.

This remarkable property, still affectionately known as the Love Compound, sits on more than 2.5 acres and includes 200-plus feet of private oceanfront bluff top. Relax in the hot tub perched right on the cliff’s edge and you can see the Channel Islands off in the distance.

Mike Love bought the estate on Mesa Lane, three miles southwest of downtown Santa Barbara, at the height of the Beach Boys’ success in the mid-1960s. Built back in 1920, it was once used as a Girl Scout camp with beloved chef Julia Child as a regular visitor. She reportedly flipped  pancakes out on the bluff.

Today the gated compound is made up of five rustic cottages that look like they haven’t changed that much since the ‘60s. They come with such hippy-dippie names as Love Cottage, Tranquility Cottage, Serenity Cottage, Bliss Cottage and Joy Cottage.

It was Joy Cottage that was originally built as Mike Love’s music studio, and legend has it that a number of those classic Beach Boys hits were written and recorded here. Today a separate building houses the estate’s music room.

A perfect perch for sunsets.  Photo: Courtesy of Daniel Zia, The Zia Group

The largest of the houses is the two-story Love Cottage with more than 2,800 square feet of space, three bedrooms and two-and-a-half baths, plus a 341-square-foot sleeping loft. It’s all beachy, cozy open-beam ceilings and wood-plank floors.

The single-story Tranquility Cottage close by, directly faces the ocean and offers four bedrooms, three baths and covers 2,600 square feet. Out front there’s a large paved patio with fire pit and spectacular views of the sea.

Need some exercise? A short walk takes you to the Mesa Lane Steps and the scary-steep descent all the way down to Santa Barbara’s famous Mesa Beach with its miles of yellow sand.

One of 15 bedrooms.  Photo: Courtesy of Daniel Zia, The Zia Group

No one is quite sure when Mike Love, now 78, actually sold the estate, or if he even did. Rumor has it that he simply passed it on to a bunch of friends who came and went. According to listing agent Daniel Zia, of the Zia Group and Keller Williams Realty, it’s actually the first time the estate has officially been listed for sale.

“This is one of the single largest oceanfront parcels in Santa Barbara and just impossible to recreate. It’s secluded from the world, but still in the heart of the city,” he explains.

It’s certainly a property that would give anyone plenty of good vibrations to call it home.

Inside one of the smaller cottages.  Photo: Courtesy of Daniel Zia, The Zia Group

The exterior of one of the estate’s five cottages.  Photo: Courtesy of Daniel Zia, The Zia Group

The hot tub on the edge of the cliff.  Photo: Courtesy of Daniel Zia, The Zia Group

The steps to the beach.  Photo: Courtesy of Daniel Zia, The Zia Group