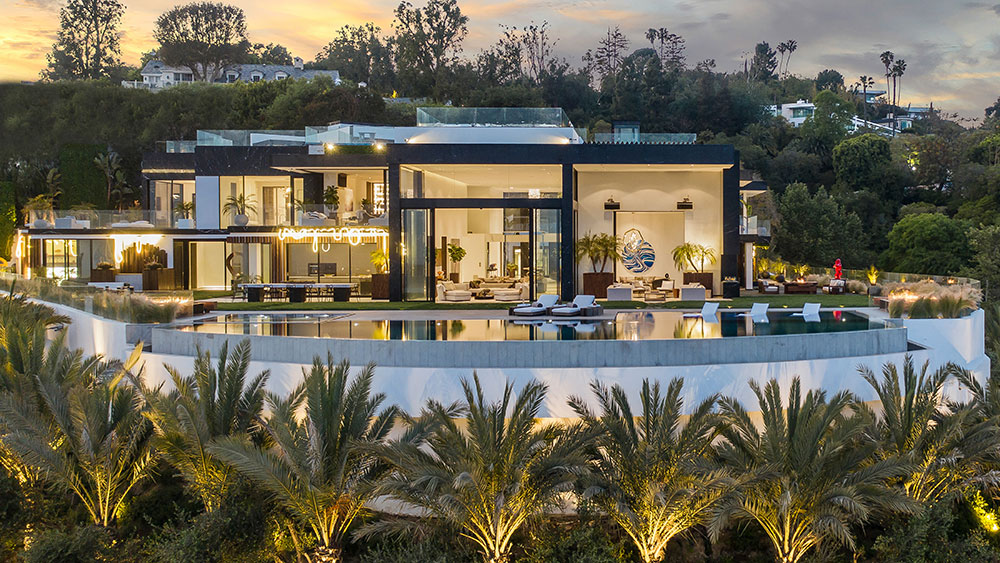 Well, the NFT craze has officially made its way into the brick-and-mortar real estate market. A new Bel Air listing, which hits the market at a whopping $87.7 million, includes both a non-fungible token gallery and light show. Perfect for the budding digital art collector.

The home is huge: It offers about 21,000 square feet and has seven bedrooms. It’s the brainchild of plastic surgeon and real estate developer Dr. Alex Khadavi, who was inspired by Italian mathematician Fibonacci’s golden ratio when building. Naturally, then, the home’s proportions are all very carefully considered. The development enjoys sweeping views of the San Gabriel Mountains and the Channel Islands, so Khadavi dubbed this five-year project Palazzo di Vista, or “Palace of Views.”

It’s quite the place to host a party. For one, there’s a literal DJ platform smack in the middle of the main living room—though you wouldn’t know it just by looking, as most of the time it’s completely hidden. Push a button and it will rise up out of the floor via hydraulic lift. Flip on some of the home’s built-in smoke machines if you want to get a real rager going. Just outside, the pool is equipped with jets that pump water in time to whatever music the DJ is spinning inside.

The pool is also, believe it or not, the site of one of the mansion’s more NFT-oriented amenities. Outside there’s a rotating 3-D laser projector that can cast light in the shape of a rhombus that’s up to 1,650 square feet large above the pool. It’s reportedly inspired by one of California’s most famous attractions, Disneyland, and its flashy World of Color light show. Here, you can have the spectacle be whatever NFT artwork you want, so long as there’s a good song going in the background.

Inside, there’s an NFT art gallery, which is arguably a better spot to sit back and appreciate the digital medium than the outside setup. Palazzo di Vista comes equipped with a collection valued at $7 million. It includes pieces by artist Ghost Girl and music producer BigHead, who worked on the chart-climbing song “Gucci Gang” by Lil Pump. The gallery has seven large displays; the preexisting artworks can be purchased separately if the buyer is interested.

The mansion is more than just a glorified NFT warehouse, though. It also comes with a few decidedly IRL perks, including a glass elevator, a car gallery, a movie theater and a Champagne tasting room (where you can of course sample other vinos as well). There’s also a koi pond outside, which is separate from the party pool (obviously). Visiting family and friends can stay in a stand-alone guest house, which has its own kitchen.

Want to get a closer look at the Bel Air digs? Check out more photos below:

The pool, which can be transformed into an NFT light show for parties.  Photo: Joe Bryant