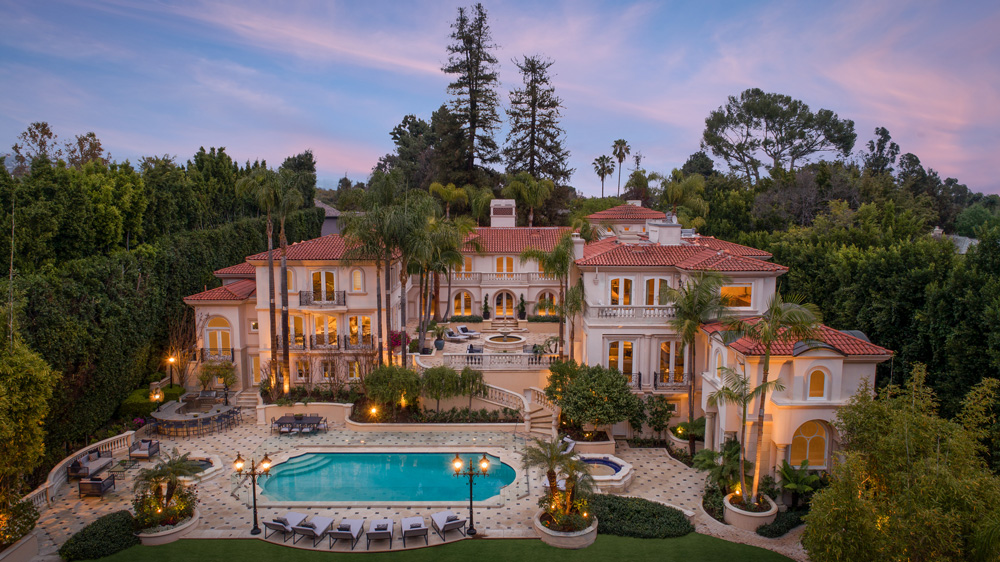 Located in Bel Air’s prestigious East Gate, the villa on St. Pierre Road has seen multiple renovations in its time, ever since the 1920s. But never before has it reached such heights of opulence and grandeur. Under the discerning eye and contemporary aesthetic of British designer Gavin Brodin, a 20,000-square-foot remodel has produced a vast arena of entertainment within the compound’s 35,000 square feet.

Hidden from neighbors by gardens and safeguarded by gates, the Mediterranean masterpiece sits on an acre parcel in perfect privacy. Upon arrival, you’re transported to a realm of architectural beauty on a grand scale. “The magic of the contemporary interior design will enchant you from the moment you enter,” says Joyce Rey of Coldwell Banker Global Luxury, “and offers a resort lifestyle, affording unlimited entertainment opportunities.”

Spiral staircases inside the home and in the vine-covered pool house outdoors descend to the new underground venues. As the focal point, the mosaic swimming pool, the skylights above it, and the surrounding classical columns create an atrium leading to the spa and lounging areas. Also spread across this level are a fitness center, basketball and racquetball courts, a bowling alley, a bar, a wine cellar, a cinema, and sumptuous living quarters for guests we imagine will never want to leave.

In the main house, a vaulted vestibule and sweeping staircase draw you into immense living rooms and offices, a children’s room, a formal dining area, and the state-of-the-art kitchen. In total, the villa offers eight bedrooms—including a majestic master suite with a fireplace and marble en suite—and 20 bathrooms. The ultramodern decor throughout is punctuated by an occasional old-world element—a wrought-iron door, a crystal chandelier, a wood-paneled study—amid the overarching symmetry and grace of a Roman domus.

The current owners, an Iranian family associated with St. Pierre Holdings, purchased the villa in 2008. Today, the $49.9 million compound is “a remarkable value on a price-per-square-foot basis,” says Rey, who is co-listing the property with Aaron Kirman and Marco Naggar of Pacific Union International.