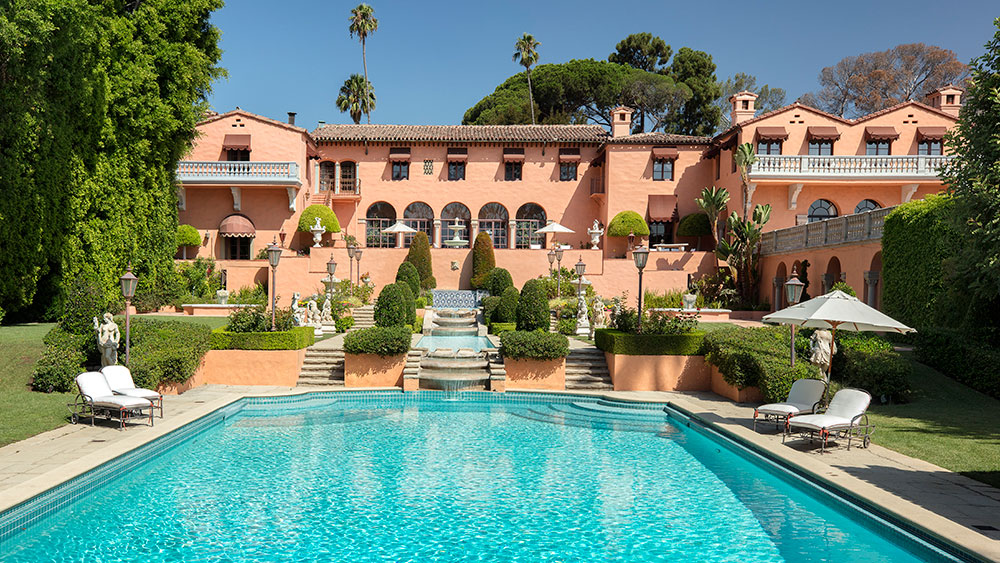 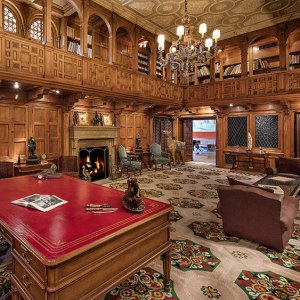 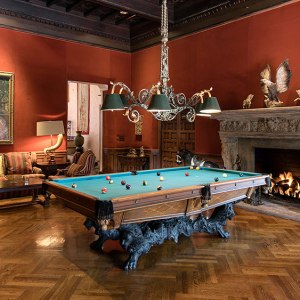 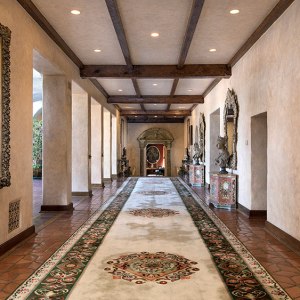 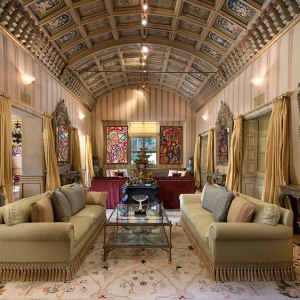 After a price cut and bankruptcy rumblings aplenty, real estate investor Leonard Ross’ silver screen-worthy 1011 N Beverly Drive is back on the market, for a sizable $125 million.

Otherwise known as the Beverly House for its location in, you guessed it, Beverly Hills, the estate is on 3.5 acres of private land, with an 18-bed, 25-bath home built by architect Gordon Kaufmann of Hoover Dam fame. Its design channels a mix of influences, pairing a Versailles-esque sense of grandeur replete with a spectacular pool, fountains, manicured gardens and statues alongside a Spanish colonial façade.

Inside the 50,000-square-foot digs, standout spaces include the two-story library with hand-carved woodwork on the balconies and walls, a billiard room with herringbone floors and an antique fireplace and an Art Deco-style lounge—Ross implemented the latter when he assumed ownership of the property, modeling it after the now-defunct Touch, a Beverly Hills club that was backed by Hugh Hefner.

A view of the exterior pools and landscaping.  The Agency

You’ll also have the caché of saying you live in a spot where The Godfather was filmed. One of the movie’s most infamous scenes, when Jack Woltz wakes up to find a severed horse head beside him in bed, was allegedly shot on the premises, though Ross himself contests this claim. Scenes from the 1992 film The Bodyguard also took place at the Beverly House.

Additional perks include a spa, two screening rooms for movie night and a grand upstairs hallway that’s 102 feet long and showcases a 40-foot-wide mural by artist Dennis Abbe. Outside there’s a tennis court, as well as sprawling terraces—altogether, there’s enough room on these spaces for a seated dinner of 400 guests.

Not surprisingly, the over-the-top estate has a significant star-studded pedigree. Before it fell into Ross’ hands, William Randolph Hearst and Marion Davies called it home. The duo’s highly publicized romance even made its way into Citizen Kane, a film in which Hearst is commonly thought to be the inspiration for the titular character, with Davies serving as muse for the love interest, Susan Alexander. President John F. Kennedy and First Lady Jackie Kennedy were also fans and former residents of the Beverly Home—the two spent their honeymoon there, and JFK later used it as his West Coast election headquarters.

The dining room.  The Agency

And you’ll be doing Ross a solid by taking it off his hands. The financier is in millions of debt, according to The Real Deal, and has until May to sell the place as cash collateral and crawl his way out of it. Recent sales of Spelling Manor for $120 million and Chartwell Estate for $150 million bode well in this regard, although an overall soft marketplace will still make it a hard sell—even for digs as grand as these.

In other words, your offer might be one that Ross can’t (really) refuse.