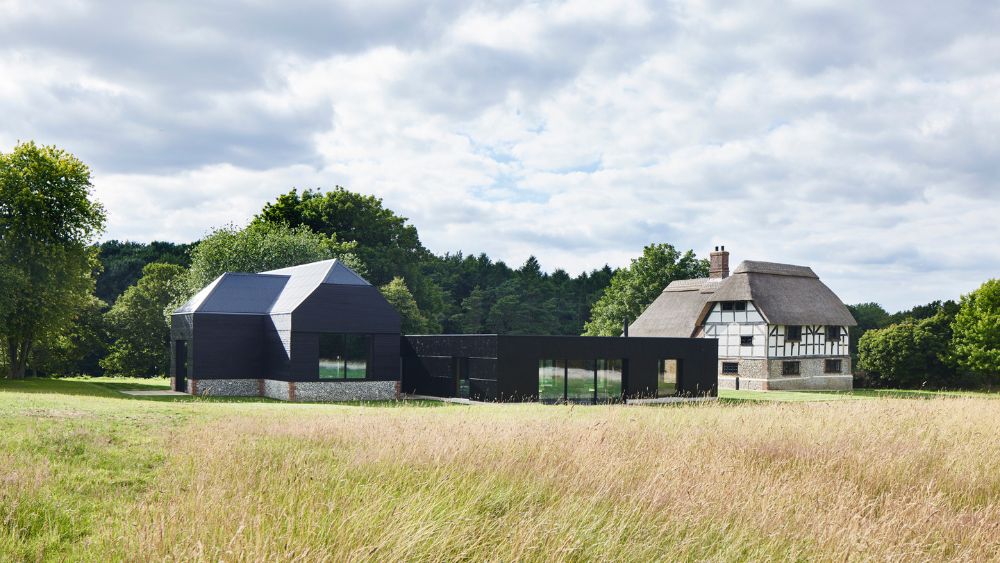 When Robin Lee Architecture was called upon to overhaul a home in Hampshire, England, the final result was a residence where modern and historic spaces collide. Instead of trying to merge the old with the new, the team decided to design the property in three distinct parts. A linking hallway connects what was once a 17th-century farmhouse to an adjacent new-build addition and a 19th-century barn that stands out in stark contrast thanks to its all-black facade. If you’ve got £7.5 million ($8.6 million) to burn, the rather unique UK dwelling can be yours.

Nestled within 20 acres of forest and wildflower meadows in South Downs National Park, Black House Farm, as it’s been named, slowly begins to reveal itself. The Grade II thatched roof farmhouse sits at the forefront behind a private gated driveway, its exterior made from flint and red brick. Internally, the three-story abode has new hardwood windows, traditional limestone plastering and wide-board oak flooring that has been meticulously restored. Among its most charming features are a working bread oven and an inglenook fireplace. As for accommodations, it offers four bedrooms, two bathrooms and a guest cloakroom.

Next to the stone-floored entrance is a hallway that cuts from the farmhouse to the former threshing barn. The transition from one space to the other is characterized by its use of contemporary materials. Think polished concrete flooring with underfloor heating, exposed oak beams and timber cladding. The single-story structure has three en suite bedrooms, a cloakroom and study. In the newly built wing, you’ll find giant picture windows and a set of sliding glass doors that look out the garden and beyond.

“The house is framed by wildflower meadows from almost every angle, and the protected forest to which its westerly aspect looks out is reminiscent of a North American evergreen landscape,” listing agent James Klonaris of The Modern Home tells Mansion Global. “Black House Farm is not just a rarity of planning consent but an exceptional achievement in its combination of architectural styles.”

Click here to see all photos of Black House Farm.