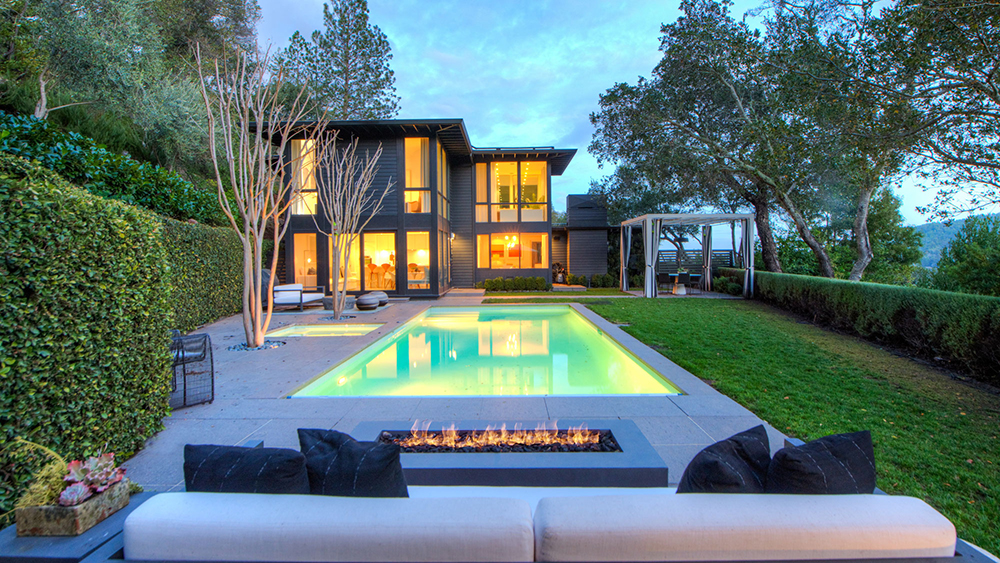 Newsom’s new top job means that he and the California first family have relocated to Sacramento, the state capital. So their secluded five-bedroom, 4,000-square-foot home across the Golden Gate in Marin County is now on the market with an asking price of $5.995 million.

The 51-year-old former San Francisco mayor and his documentary filmmaker wife, Jennifer Siebel Newsom, bought the two-story mid-century modern home back in 2011 for $2.2 million, according to records.

Sitting on 1.37 acres in Kent Woodlands, 17 miles north of the city, the house was designed by acclaimed Bay Area architect Worley K. Wong and completed in 1950. From its floor-to-ceiling windows, it has commanding views of the San Francisco skyline, bay, and Mount Tamalpais.

Now it’s all sleek lines, acres of glass, and contemporary white and shades-of-gray paint. The expansive kitchen and six bathrooms are again a sea of stark white, though the look is softened by rich oak-board flooring throughout.

With four children all under the age of 10, it’s clear that this was a true family home with many of the five bedrooms equipped with bunk beds, cots, and stuffed giraffes.

Outside, tall hedgerows and the home’s elevated position add to the feeling of privacy to enjoy the home’s pool and spa, covered gazebo, and outdoor fire pit.

And with Newsom being a passionate supporter of the use of renewable energy, naturally there are solar panels covering most of the roof. For the listing photography, the new governor even left his much-loved electric Tesla Roadster sports car parked in the carport. Don’t expect it to be on the list of fixtures and fittings.

As for their move to Sacramento, the Newsoms have already snapped up another California mansion. In December they closed on a $3.7 million, 12,000-square-foot, six-bedroom house in Fair Oaks, a 25-minute drive to the State Capitol building.

Chelsea Ialeggio of Vanguard Properties Marin County has the listing on the Kent Woodlands home.

Exterior of the 4,000-square-foot home.  Photo: Courtesy of Vanguard Properties