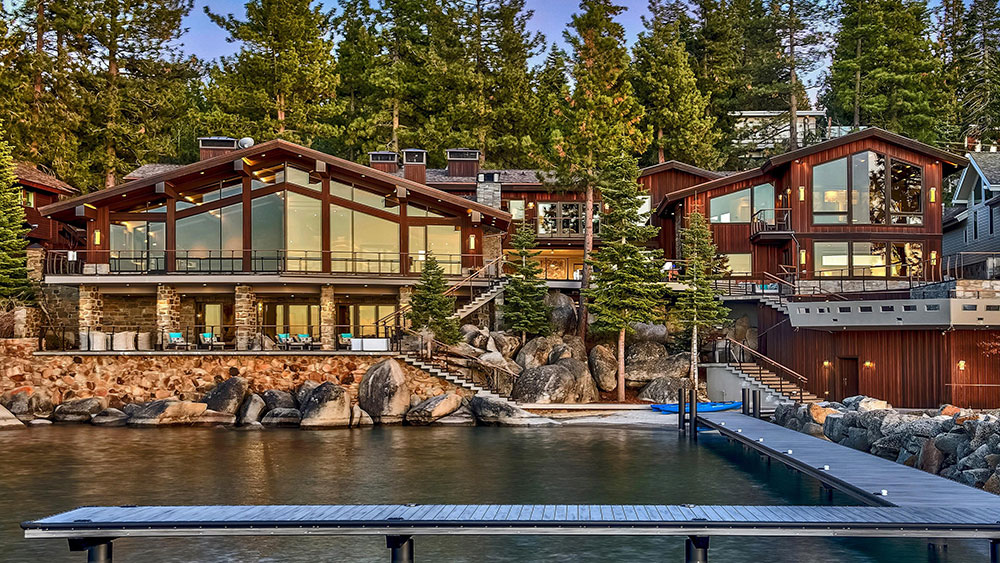 Every home should have a therapeutic Himalayan salt cave. And a secret tunnel so celebrity guests can come and go unseen by prying paparazzi lenses.

Legend has it that after the celebs performed at his casino, Harrah would ferry them across the lake on his 55-foot wooden speedboat Thunderbird to Villa Harrah, to continue the party. From the dock, they’d enter the house through a secret underground tunnel that still exists today.

Not that Harrah, who died in 1978 at age 66, liked them to hang around. The original house was reportedly built with just one bedroom.

Situated on Skyland Drive on Lake Tahoe’s prized east shore in Nevada, this sprawling eight-bedroom estate with 150 feet of lake frontage, offers some of the most breathtaking views of any Tahoe lakefront property.

The current owners, according to Realtor.com records, purchased the home in 2012 for $12 million. They went on to spend a reported $14 million on a spectacular remodel of the 20,000-square-foot main house, retaining muchof the original ski-lodge-cum-party-house style and adding best-of-the-best features.

A wall of windows plays up the view.  Photo: Courtesy of Compass

They replaced many of the living room walls with floor to ceiling windows for better views of the lake; created a family bunk room with built-in bunk beds for 12; and remodeled the kitchen with industrial-grade Wolf and Sub-Zero appliances.

The kitchen  Photo: Courtesy of Compass

“The great room is the ultimate centerpiece for Tahoe glamour and unforgettable entertaining,” says broker David Bellings, of realtors Compass Lake Tahoe in the listing. “The front door opens to an impressive wall of glass that frames a stunning panoramic view of the lake and mountains.”

As for that salt cave—as part of the home’s expansive resort-style spa, Harrah had blocks of pink Himalayan salt, known for its therapeutic qualities, adhered to acrylic sheets and attached to the walls. Softly back-lit, and with no windows, the room could be the perfect spot for meditation and chill-out relaxation.

The spa itself comes with a steam room, sauna, hot tub for eight, cold-water plunge pool and even a hair salon. Outside there are huge decks for entertaining, a lakeside swimming pool, small beach for launching kayaks, a dock for boat mooring and a large protective breakwater.

And don’t worry about shoveling snow from the circular driveway during the winter; it’s heated.

First listed for $34.5 million in August last year, Villa Harrah is now back on the market for a more appealing $25.75 million.

“This really is a once-in-a-lifetime opportunity to own the most coveted lake front property in Tahoe,” explains Bellings. And a piece of entertainment history.

The decks make the most of the great outdoors.  Photo: Courtesy of Compass