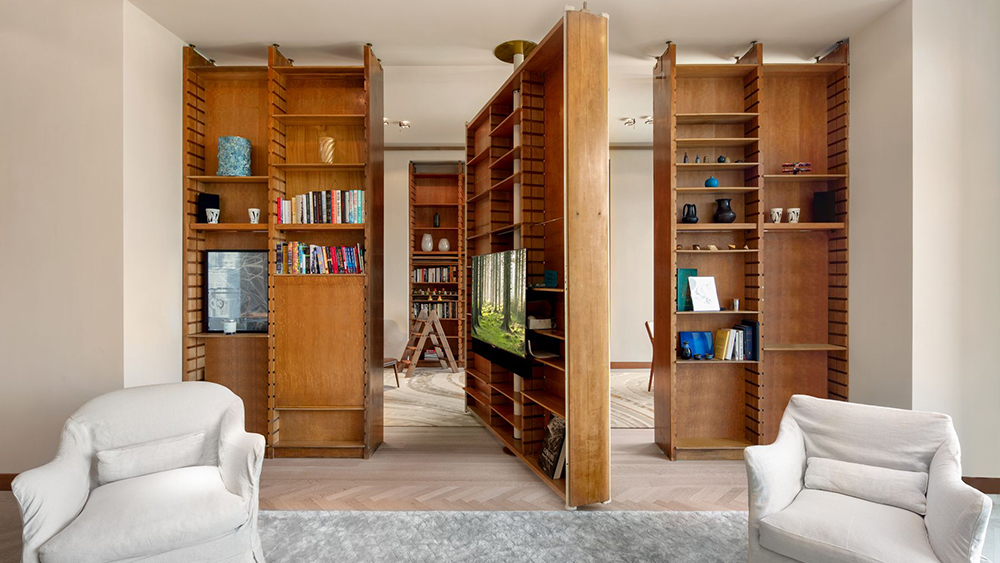 In whodunnit flicks, the secret passageway to the villain’s lair is almost always hidden behind a bookcase—just give one of the books a tug and you’re on your way. Those with a penchant for the dramatic may want one for their house, which works out, because a New York City condo with a “secret” library door has just listed for $14.9 million.

The home is situated within 15 Central Park West, a building designed by the revered Robert A. M. Stern, whose buildings are some of the most sought-after addresses in the city. His firm was the brains behind 220 Central Park South, which is where hedge-funder Ken Griffin shelled out $238 million for a home in 2019; to date, that’s still the most expensive home sold in America.

This particular unit at 15 Central Park isn’t quite as lofty—or, mercifully, expensive—but it has a few one-of-a-kind perks that distinguish it from the competition. For one, the 2,367-square-foot home was designed by Axel Vervoordt, one of the most revered interior designers working today. He worked on Kanye and Kim Kardashian West’s cathedral-like home in California; other big-name clients include Sting, Calvin Klein and Robert De Niro.

Because of Vervoordt’s hand in the design, the home does not look like others in the building. Rooms are accented with brass moldings and white oak floors, but the most distinct element is the built-in bookcases. The library and the living room are technically speaking separate rooms, but one of the shelves can swing open to seamlessly connect the two.

One of the bedrooms  Photo: Courtesy of Sotheby’s International Realty

Since it’s a Central Park-adjacent home, it capitalizes on the views with Juliette balconies overlooking the greenery below. The primary suite includes a massive en-suite bathroom, a walk-in closet and two additional closets attached. The kitchen, meanwhile, is brand-new, featuring Sub Zero, Bosch Oven and Thermador appliances.

Of course, the standout feature here is undoubtedly the library and its “secret” passageway—great for surprising guests or for getting to and from the main room while you’re working.

Check out more images of the residence below:

Another view of the library  Photo: Courtesy of Sotheby’s International Realty