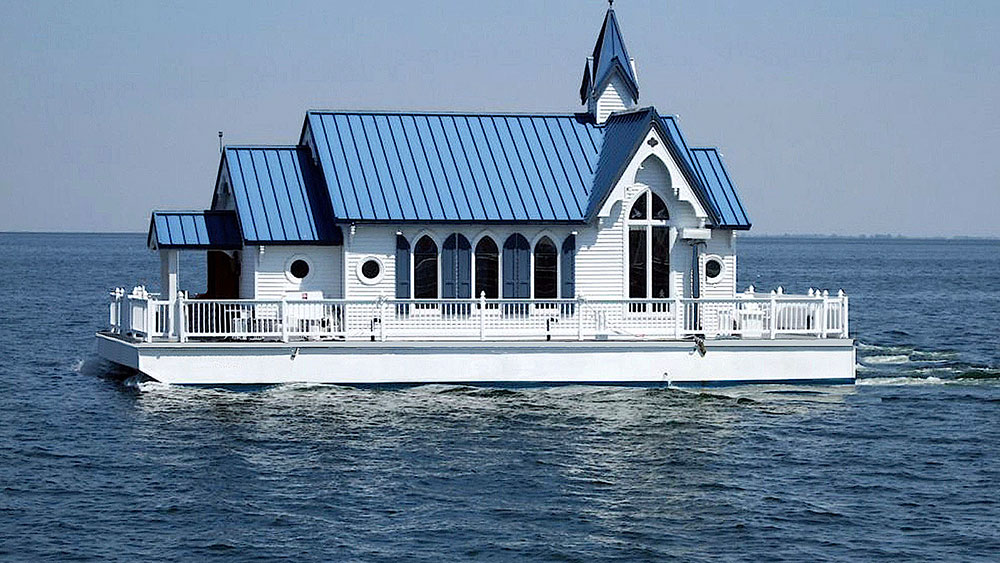 This was definitely the place to watch the bride “float” down the aisle and where couples “tide” the knot.

Once America’s only floating, self-propelled wedding chapel, “Chapel on the Bay,” as it was known, was converted five years ago into a super-luxury, two-bedroom, Florida-based condo-on-the-water.

Now, after being listed for as much as $600,000—it cost a reported $1.3 million to build and convert—this former home of a thousand “I do’s” is back on the market with a $399,000 asking price. Lifejackets included.

A Clearwater, Fla. couple came up with the idea of a floating chapel after seeing a similar concept in Australia during a 2004 visit. They commissioned a well-known Tampa naval architect to design and build the 60-foot, glassfiber-hulled catamaran with its distinctive blue-roofed sanctuary.

Twin 115-horsepower Cummins diesels give the 33-ton vessel a top speed of nine knots, while the twin hulls were specified to make it more stable and easier to maneuver than a traditional flat-bottomed barge.

And in place of a traditional anchor, it has twin “spud poles”—beefy steel tubes that can be lowered to hold the boat firmly to the seabed.

Matrimonial features at the time included 16 hand-carved, red-oak pews, an altar, towering stained-glass windows, purple carpeting and even a bride’s changing room. Pre-social-distancing, it could welcome aboard wedding parties of up to 125.

This Florida condo is like no other.  Photo: SpecialFinds.com

Sadly, but perhaps not surprisingly, not everyone wanted to get hitched at sea. By 2013, the business had stalled and the aquatic chapel was put up for sale.

Fast forward to 2015, and after seeing it advertised online, retired Oregon contractor Sam Cribbs and his wife Linda made an offer and were handed the keys. Their plan? To convert it into a two-bed weekend retreat from which to enjoy the Florida sun.

To transform it from chapel to 1,050-square-foot, two-bed condo involved stripping out the entire interior, adding a separate primary bedroom and ensuite bathroom, a designer kitchen with granite countertops and high-end appliances, plus a loft-like second bedroom reached via a spiral staircase.

Thankfully they kept many of the original wedding chapel features. Like that distinctive 30-foot rooftop spire, the lovely stained-glass windows, the arched wooden front door, and varnished wood-plank flooring.

Since completing the project, the Cribbs have being offering the home on Airbnb with rentals from $250 a night. The deal is that the vessel stays put in its marina slip on Florida’s Gulf Coast Manatee River, opposite downtown Bradenton, no sea journeys allowed.

Who might buy it? According to Brenda Thompson of SpecialFinds.com, who holds the listing, it would make the perfect waterfront home, or maybe a special office. Or for a restauranteur, a unique venue for dinner cruises. Or even convert it back to a wedding chapel on the water.

“She comes totally equipped with everything from the furniture, to a fully-stocked kitchen, to a 65-inch flat-screen TV.  You can even live aboard at the marina for $900 a month. There are endless possibilities,” she explains.

And as it’s still listed on Airbnb, Thompson adds that prospective buyers can try it out for the night before saying “I do” to the purchase.

The cozy living room even has stained glass.  Photo: SpecialFinds.com

A spiral staircase leads to the second bedroom.  Photo: SpecialFinds.com