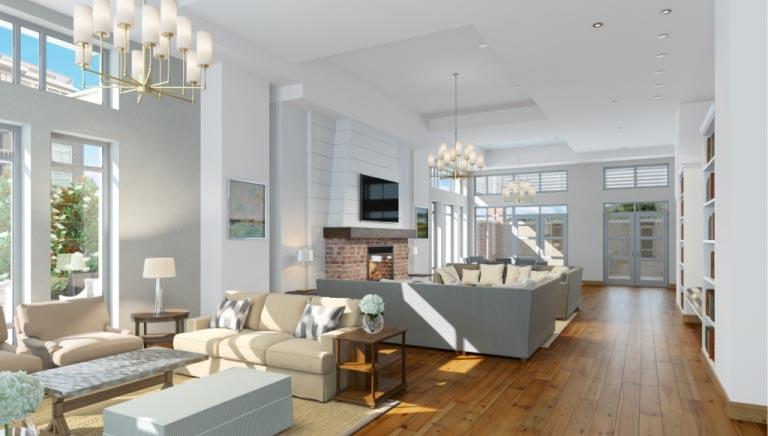 MOUNT PLEASANT, S.C. (March 10, 2016) – Following a sales hiatus during heavy construction, residences at Tides IV are again available for purchase as work on the project enters the final stages. A model and amenities are currently being prepped to come online in May.

“We closed the pre-construction pricing phase in November to focus on heavy construction,” said Miller Harper, partner-in-charge in South Carolina for East West Partners. “The construction timeline has proceeded according to plan and we’re in a strong position as we re-enter the market.”

Twenty-seven of 54 residences at Tides IV are sold or under contract, with an average sales price of $915,000. Residences range from 1,050 to 3,100 square-feet and feature one-to-three bedrooms with penthouse options also available.

The updated accoutrements have drawn a wide range of buyers, from convenience-seeking retirees and pre-retirees to Joshua Mondschein, a 35-year-old radiation oncologist.

“I’ve lived in Miami, Philadelphia and Nashville, and there is premium in those cities, especially among younger professionals, on residences in luxury buildings with vista views,” Mondschein said. “It’s different in Charleston because there isn’t really anything else like Tides IV available. It’s new construction, it’s extremely thoughtful in floor-plan design and it the views are unparalleled.”

Harper said that location and “lock-and-leave” ease of living have spurred sales.

“Buyers are particularly interested in being close to downtown, local beaches and all that Mount Pleasant has to offer from great restaurants to healthcare,” Harper said. “There is also incredibly easy access to the Ravenel Bridge and major roadways. That combination, along with building quality at Tides IV, has driven a lot of interest.”

East West Partners is a family of related but independent companies devoted to building, selling, managing and supporting high-quality real estate in the communities in which they operate.  The group has been active in residential development for more than 30 years and in the Lowcountry since 2000, having also been part of the team that developed and sold the highly acclaimed One Vendue Range along Waterfront Park in downtown Charleston. The company is also involved in a number of forthcoming projects at Gadsdenboro Park on the Charleston Peninsula. With projects across the nation, East West Partners is a two-time recipient of the Urban Land Institute (ULI) Award for Excellence, which is widely recognized as the development community’s most prestigious awards program, recognizing the full development process of a project, including architecture and design, among other aspects.