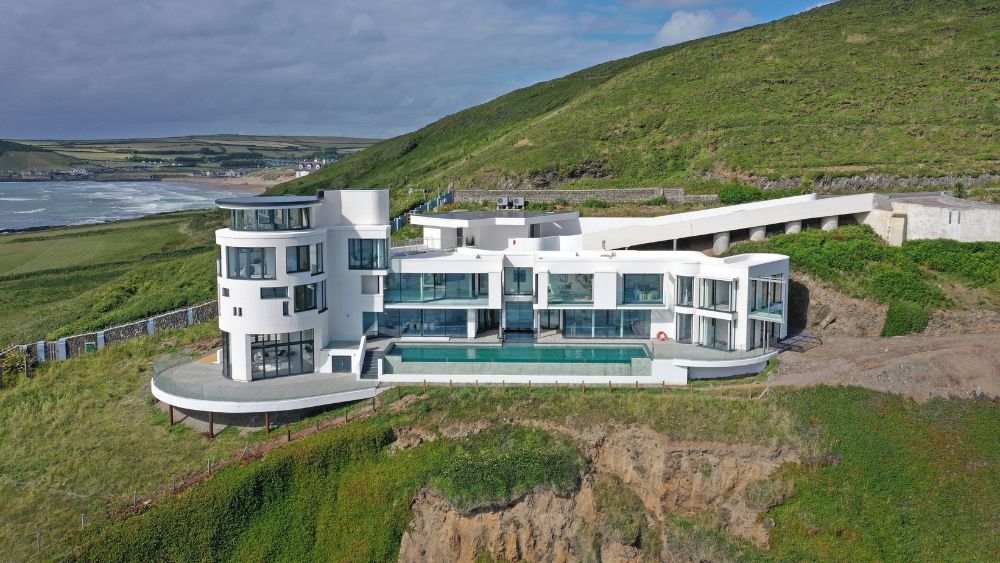 Lighthouses aren’t often associated with luxury, but that doesn’t mean they can’t inspire it. That’s the case, at least, for waterfront mansion across the pond that just hit the market.

The singular 3-acre property, which Knight Frank has listed for £10 million ($12 million), occupies a prime position on North Devon’s coastline. Nestled between Saunton Sands and Baggy Point, the newly constructed manse is sited on a cliff overlooking the ocean below. Spanning 6,266 square feet, it offers five bedrooms, five baths and a seaside location that sets it apart from other properties on the English coast.

“Chesil Cliff House is an extraordinary property, there is nothing else like it,” listing agent Hamish Humfrey said in a statement. “Without doubt, it is one of the very finest homes to come to market on the national coastal waterfront.”

Chesil Cliff is the brainchild of owner Edward Short. Short has dedicated the better part of 10 years to building this lighthouse-like home, which fans of Grand Designs might recognize from its appearance on the British television series in 2019. For the massive undertaking, Short enlisted HOP Consulting as the engineer and Professor Alan Phillips as the architect to help carry out his vision.

Chesil Cliff is built into a cliff on the English coast.  Knight Frank

“Our commission provided a rare opportunity to design a contemporary coastal house in one of the most beautiful places in England,” Phillips said in a statement. “The architectural concept had to be bold and elegant.”

With an Art Deco aesthetic, the main residence is characterized by a striking white façade, clean lines and sweeping curves. The interiors are a blank canvas and offer a quintessential indoor-outdoor living experience complemented by floor-to-ceiling windows and doors and a sprawling layout. Future owners will have the opportunity to put their own mark on the place, too.

The ground floor is home to the main living areas, including an upscale kitchen and dining room. The first floor has three bedrooms, one of which is circular, while the second floor offers additional accommodation. As you might expect, the views get better the higher you climb.

The attached three-bedroom guesthouse, known as the Eye, reportedly has the best vistas of all. A spiral staircase leads up to the third floor where you can access the “storm room,” from which you can take in the Atlantic’s angriest tempests. As the pad’s best vantage point, the annex also features an outlook and balcony.

Chesil Cliff’s grounds are nothing to sneeze at, either. For easy navigation, a cantilevered bridge leads from the driveway directly to the garage. To maximize the home’s south-facing setting, a sizable terrace juts out to the sea and comes complete with an infinity pool and sunken hot tub. There’s also a helipad on the estate if you or your guest need to fly.

“At this level, buyers are extremely discerning and increasingly keen to make a home their own, this offers just that and so much more,” Humfrey added. “The lifestyle on offer here will be like no other.”

Click here to see all the photos of Chesil Cliff.