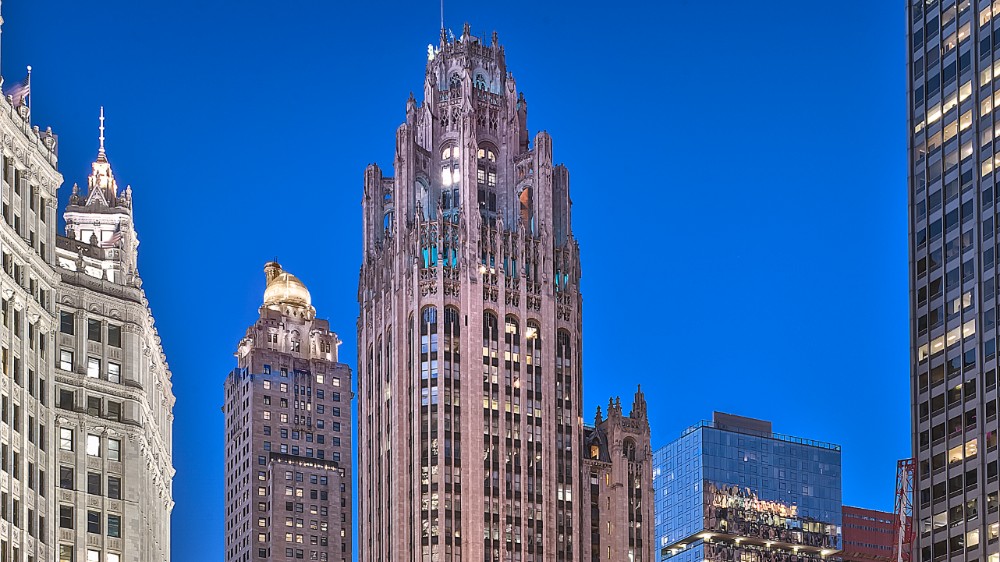 Nearly a full century ago in 1922, the Chicago Tribune launched a contest for bids to build its new home. More than 250 architectural firms from around the world—from Australia to Cuba to Luxembourg to Mexico—submitted proposals. The win went to Howells & Hood, the New York duo behind Rockefeller Center who became renown for their Art Deco style.

Completed in 1925, the neo-Gothic Tribune Tower at 435 N. Michigan Ave. housed the newspaper and its affiliates until 2018. You might say it’s now been given a massive edit: going from offices to 162 luxury residences, as well as retail and restaurant spaces, all built to exceed Chicago’s sustainability standards. The 36 stories will include condos ranging from one to four bedrooms, claiming between 1,100 and 4,345 square feet apiece, with the largest units, called “architectural masterpieces,” taking over some full floors. Prices begin at $700,000 and go up to $8 million.

Soaring ceiling heights will be a feature of the penthouse units.  Tribune Tower Residences

While the homes themselves will be dressed in the finest finishes by the Gettys Group interior design firm and Solomon Cordwell Buenz architects, the common spaces have plenty of headlines. On the second and third floors, above the retail level, you’ll find a spa and fitness center, private events spaces with a bar and kitchens, a residents-only lounge, a wine room, and private courtyard. On the seventh floor will be an all-season pool, sun deck, terrace and outdoor grill stations. Up near the iconic crenelated pinnacle will be the magical Crown Lounge and terrace with an herb garden, a chef’s kitchen and more outdoor grill space.

A rendering of one of the tower’s penthouses.  Tribune Tower Residences

In the 24 “architectural masterpieces,” expect to see soaring ceiling heights as well as preserved original details and elements gussied up to be even more beautiful. Prices for those range from $2 million to $8 million.