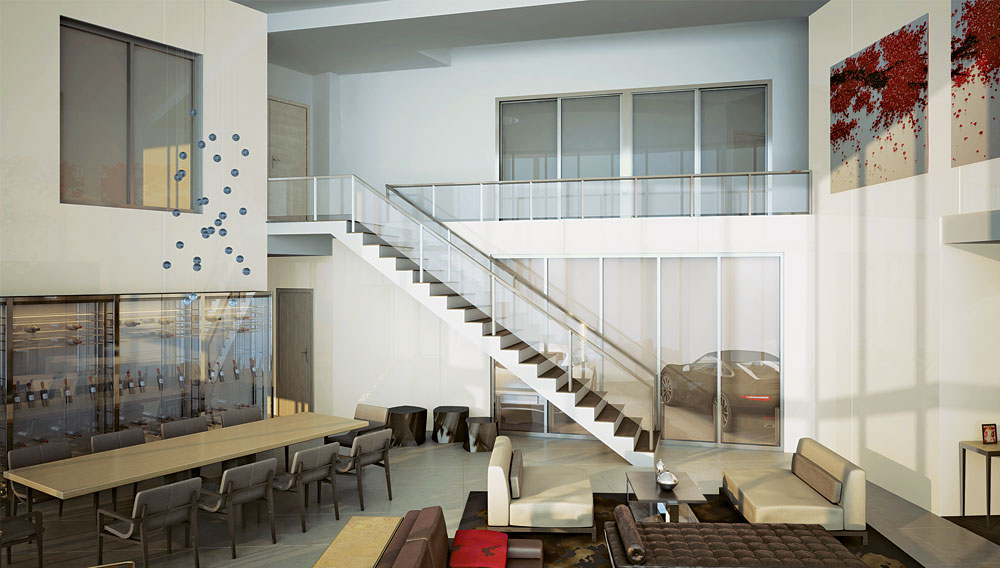 1} Porsche Design Tower Miami  At this 60-story tower from Porsche Design Studio, individual car elevators will whisk residents’ vehicles directly into their homes in less than a minute, and some owners will even be able to view their cars like works of art from inside their apartments. The auto aficionados who buy any of the 132 units—ranging from 4,300 to 17,000 square feet, with most including a plunge pool on the balcony—have the option of purchasing one of six additional “man caves” on the third floor, which will be outfitted to filter exhaust fumes and cigar smoke. The Sunny Isles–area tower is scheduled for completion in 2016. Units from $5.3 million to more than $32 million. www.pdtower.com

2} Surf Club  Richard Meier brings his signature minimalist lines to the beachfront with this glass-and-steel structure that will debut in 2015. While many of the area’s other developments have attracted a more diverse, international crowd, the Surf Club has lured mostly New York–based potential buyers, who are expected to use the units as second homes. The 150-unit structure—located close to the Indian Creek Golf Club and the Bal Harbour Shops—is on the site of the historic Surf Club, which will be restored as a private club. Units from $3 million to $35 million. thesurfclub.com

3} Jade Signature  The Swiss firm Herzog & de Meuron spent more than a year conducting sun tests and wind studies to make sure the 10-foot-tall window walls in the units of Jade Signature would best take advantage of the structure’s setting in Sunny Isles. Some units will span the width of the entire building, affording both ocean and city views. Amenities at the property, which is scheduled for completion at the end of 2016, will include a hammam, plunge pools, a water terrace, a Zen garden for yoga, a zero-entry pool, and a beach. Units from $1.8 million to $26 million. www.jadesignature.com

5} Oceana Bal Harbour  For this 28-story project, the Argentinian developer Eduardo Costantini—founder of the Malba Museum in Buenos Aires, one of the largest contemporary-art museums in South America—purchased two Jeff Koons sculptures to grace the building’s breezeway. The 240-unit development, which is scheduled for completion in 2016, will feature interiors by Piero Lissoni and landscaping by the Swiss landscape architect Enzo Enea. Units from $3 million to $30 million. www.oceanaresidences.com

6} Beach House 8  This 10-story building, when it debuts in June 2015, will include a five-bedroom duplex penthouse with 6,000 square feet of outdoor space. All owners will have access to a yoga terrace, a 75-foot-long pool, and a lounge area designed by Michele Bonan, who also designed the city’s Cipriani and Casa Tua restaurants. Units from $5.9 million to $14 million. www.beachhouse8.com

7} Faena Miami Beach  Part of one of the most ambitious projects under way in Miami, the Faena House was designed by the London-based Foster + Partners. Curved railings on generous terraces will help give the 18-story building a yacht-like feel. The 47 residences are part of a larger plan that includes the Faena Saxony Hotel, designed by Baz Luhrmann and Catherine Martin, and the Faena Arts Center, designed by Rem Koolhaas and OMA, all of which are set for completion by the middle of 2015. Units from $2.5 million to $50 million. www.faenahouse.com

8} One Thousand Museum  Zaha Hadid’s designs for her first residential tower in the Western Hemisphere include an exoskeleton that allows column-free interiors and a double-height, rooftop aquatic center with an indoor infinity pool and a sky lounge on floors 62 and 63. But it is her sales center—a space-age venue with a hologram cube that shows the development’s virtual structure—that has already captivated potential buyers. The tower, which is scheduled for completion in early 2017, is one of a few residential developments in Miami’s burgeoning downtown area, off the beach, that are commanding top dollar. Units from $5 million. 1000museum.com