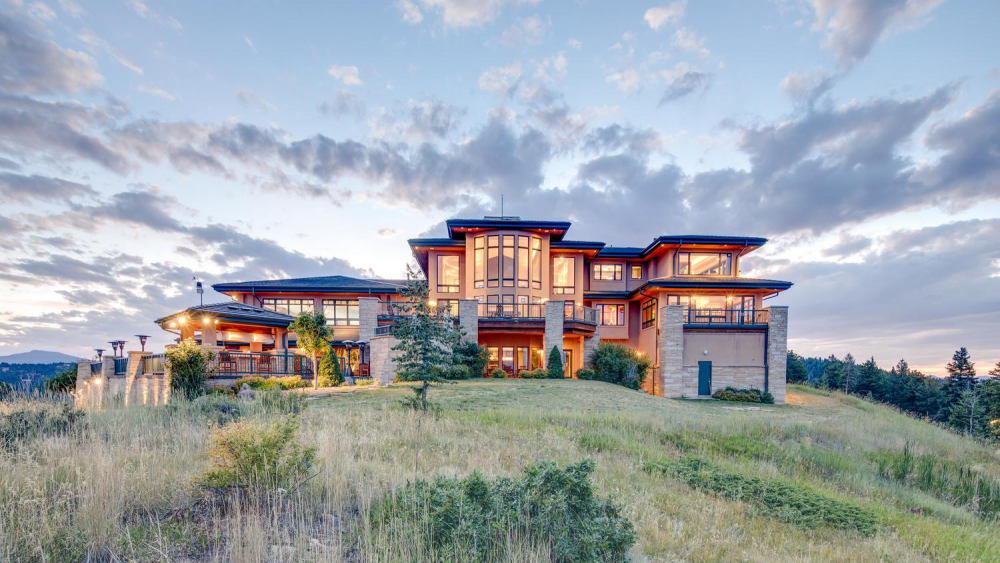 Thunder Ridge, a Colorado estate that recently listed for $19.99 million, does indeed have both. And while that means your cars’ home will technically be more spacious than yours, with digs like these, you won’t be left wanting.

Situated in the tiny community of Evergreen, just 30 minutes outside of Denver, the seven-bed, 14-bath home has plenty of quirky amenities. Chief among them is the grotto-style indoor pool on the main floor, which the previous owner, former race car driver Richard Berry, modeled after Hugh Hefner’s infamous watering hole—Tiki bar and all.

“I wanted to have a piece of the Playboy Mansion here in Colorado,” he told The Wall Street Journal. Palm trees (real, albeit mummified to survive the winter frost) run alongside the pool, and a waterfall—plus slides—flow into it. The ceiling resembles the night sky, with fiber optics that mimic constellations—even the occasional shooting star. A row of glass doors opens to the outside, where, not too far off, there’s another infinity pool that overlooks the spectacular mountaintop view.

The living room gets plenty of light from its double height ceilings.  LIV Sotheby's Realty

Downstairs, there’s a unique movie theater: one inspired by Star Trek, complete with glowing mock control panels lining the walls. The seats look like Captain Kirk’s, complete with The Enterprise’s logo, and are capable of moving, syncing to action sequences shown on screen. A wine cellar and tasting area are also downstairs, as well as a fully equipped salon fit for haircuts, blowouts, manicures, and pedicures.

The upper level is entirely devoted to the master suite, which has its own marble bathroom, walk-in closet and views from almost every angle. All of the other bedrooms are housed in a separate wing on the main level.

The pool grotto. That sky is really a ceiling.  LIV Sotheby's Realty

The nearby car museum, meanwhile, is a monolithic piece of real estate in its own right—capable of housing 100 cars in the hangar-style showroom. It has its own carwash, gas station and theater-style lighting to make each set of wheels a bona fide showpiece. There are living quarters just upstairs, with a bedroom and two full bathrooms, should you choose to hire staff to oversee your collection. Berry housed his Bugatti Veyron here—the first one ever made—as well as countless other prized marques. Electric hookups and even a carwash are included.

There’s plenty of room to take one for a spin, too. The estate is comprised of just under 80 acres, with mountain roads to push the limits of fast cars and jaw-dropping views when out in a grand tourer.

It may sound like a bachelor pad on steroids, but Berry actually spent much of his time at Thunder Ridge with family. Should he sell the place at its nearly $20 million asking, it will set a record for the area.

See more of Thunder Ridge, below: