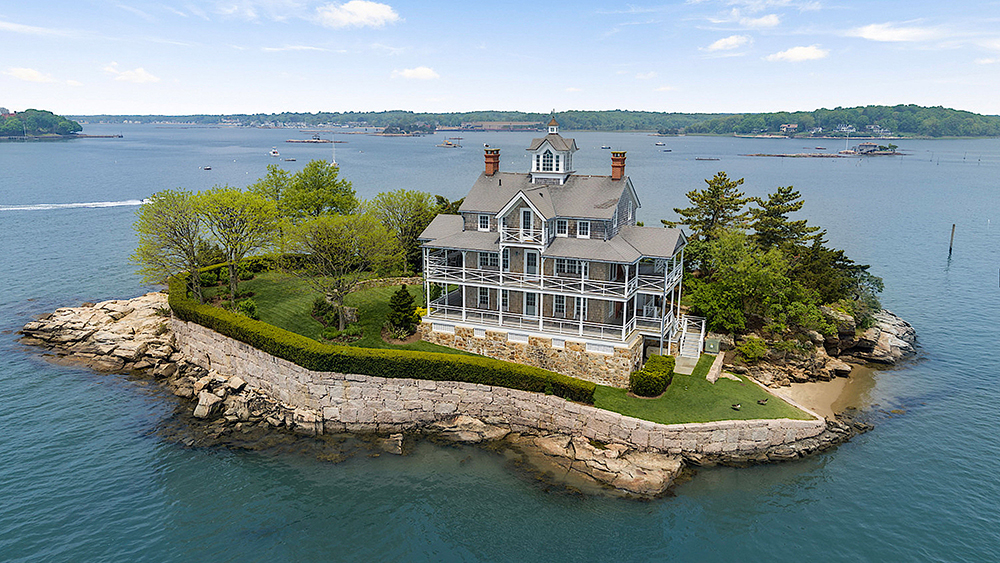 Looking to really socially distance yourself in the time of coronavirus? Consider this tiny private Connecticut island, complete with a family-friendly, eight-bedroom mansion, that’s just been listed for $3 million.

Wheelers Island is a three-quarter acre rock in Long Island Sound that’s part of the Thimble Island archipelago, close to the artsy colony of Branford, Conn.

And the best part: If you’re handy with a snorkel and flippers, Wheelers Island could end-up costing you nothing, as in zip, zilch, nada.

Legend has it that back in the 1600s, swashbuckling pirate Captain William Kidd buried a chest of gold somewhere in the Thimble Island chain as he fled pirate hunters. Find it and consider your mortgage paid.

Known originally as Page’s Island, passionate yachtsman Frank Wheeler acquired the rock in 1885, with his family owning it until 1998. That’s when it starts to get interesting.

Along comes wealthy widow Christine Svenningsen. A year after her husband John Svenningsen died in 1997, at age 66—he was president and CEO of New York-based Amscan Holdings, one of the world’s largest suppliers of party goods—she snapped up Wheelers Island for a reported $520,000.

She didn’t stop there. Between 2003 and 2007, she went on to acquire 10 of the Thimble islands. That included splashing an astonishing $22.3 million for the 7.7-acre Rogers Island, with its 13,000-square-foot Tudor-style mansion, tennis courts and putting-green designed by golfing great, Jack Nicklaus. In total she spent more than $33 million on her island-buying spree.

Following her marriage to former architect Edmund Stoecklein in 2015, Svenningsen tried to offload eight of the islands—including Wheeler—for a combined $78 million. With no takers, she dropped the price a year later to $50 million.

Now the so-called “Island Lady,” with an urge to spend more time in Washington State where she and her husband own property, is trying again. She’s listed Wheelers Island along with two others close by—Belden Island and Jepson Island. Buy all three for a combined $5.3 million.

Without doubt, Wheelers is the flagship; it’s often referred to as the “Queen of the Thimbles.” Svenningsen leveled the original house in 2001 and replaced it with a stately, three-story, cedar-shakes home with 2,462 square feet of living space.

“This is a leave-the-world behind sort of place, yet you are still close to the shoreline so you’re not isolated,” says listing agent Margaret Muir, of William Pitt Sotheby’s International Realty.

Take your boat, or water taxi, from the nearby, quaint harbor at Stoney Creek and step off at Wheelers Island’s private jetty. Steps lead up into the main house with its huge family room and fireplace, spacious eat-in country kitchen and cozy hideaways for reading or just gazing out at the water.

Steps lead up to a second floor with its master suite and myriad of bedrooms. More steps lead to a third floor with its whimsically-decorated guest bedrooms. Muir explains that this top level could easily be converted into a spectacular, one-floor master bedroom suite.

One of the guest rooms.  Photo: William Pitt/Sotheby's International

Svenningsen, who is an artist, obviously had fun decorating the house in colorful and patterned themes throughout; it is being sold fully-furnished.

Outside, the island comes with its own, albeit small, beach that’s perfect for launching kayaks, or taking a dip. Surrounding the main house is a combination of manicured lawns, towering trees and high hedgerows for privacy.

“This is a home that that was built for fun, relaxation and escaping the worries of daily life,” explains Muir.

The view out into the Long Island Sound.  Photo: William Pitt/Sotheby's International