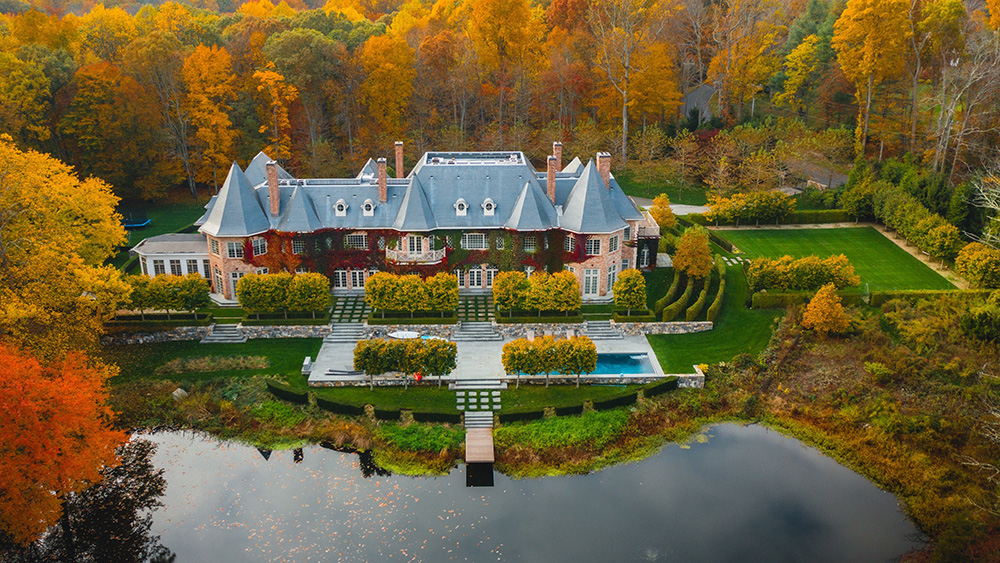 These days, living in the ‘burbs is more popular than ever. A home with acres of land in a quiet neighborhood certainly beats a sky-high penthouse in an overcrowded city when it comes to sheltering-in-place, anyway. If you’ve yet to decamp from your major city of choice, then you’re in luck, as this Connecticut home has just listed for $15 million, and it’s got pretty much all the amenities that you may be missing in your urban condo.

The home is in New Canaan, a tony part of Fairfield county that’s best known for its architectural history. The renowned “Harvard Five,” a group that consisted of modernist designers Marcel Breuer, Landis Gores, Philip Johnson, John M. Johansen and Eliot Noyes all settled here. They constructed a handful of famous residences during this tenure, include the Glass House (Johnson) and the Noyes House (Noyes, obviously). This newly listed New Canaan manse doesn’t have the Harvard Five’s pedigree attached to it, although Noyes reportedly used the land for one of his projects many years ago and it’s a stunning property.

His project was likely very different from what’s there today, as the 18,000-square-foot home was inspired by stately European homes, not the clean lines of modernist homes à la New Canaan’s most famous architects. The entryway, for example, has high ceilings, a curved staircase and columns. Just off this main space is a music room, a space dedicated solely to a grand piano that could be repurposed into a small office, and the living room, which has a sunken floor.

The subterranean garage, which can hold up to 25 cars.  Brown Harris Stevens

The right wing of the home houses the dining room and sleek, modern kitchen (with appliances by Valcucine), as well as a gym, spa and sauna. Two offices also occupy the first level, plus a two-story library with a circular staircase leading to the wine cellar below and the primary suite above. Outside sits a spectacular pool, tennis court, pond and fountain. Having friends or family over for a pandemic respite is a possibility, as the guest house is 2,000 square feet and has its own kitchen.

The dining room and kitchen.

Of course, one of the most over-the-top and sought-after features of this property is its underground garage, which can stylishly house up to 25 of your prized marques. There’s also a game room on this subterranean level.

While the Michigan Road address may not be designed by the area’s most acclaimed architects, it is ideal if you’re looking to ditch your city digs for a six-acre parcel with dedicated space for your autos.

Check out more photos of the New Canaan home, below:

One of the bedrooms.  Brown Harris Stevens

One of the home offices.  Brown Harris Stevens

One of the library spaces.  Brown Harris Stevens