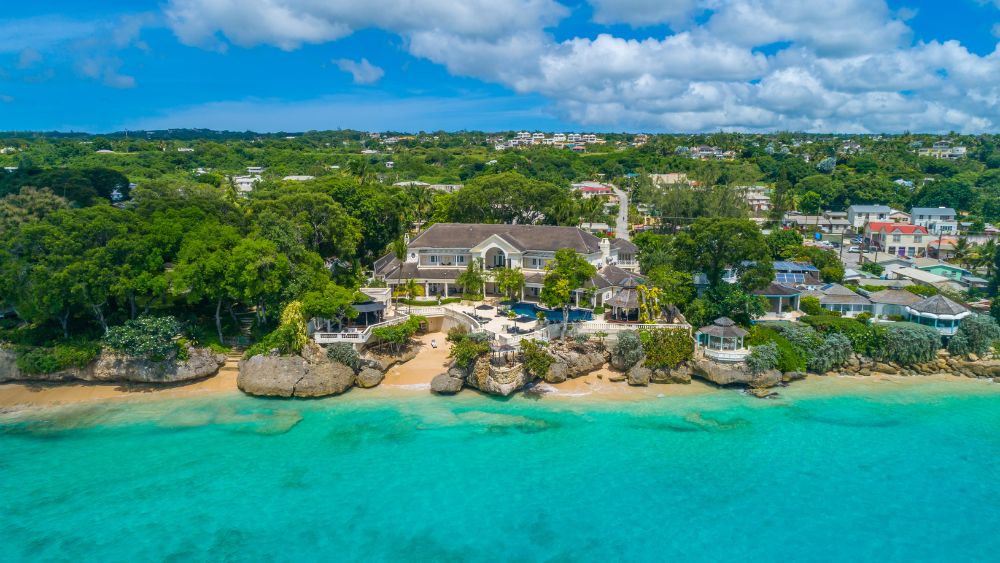 Courtesy of One Caribbean Estates

Elton John, Nicole Kidman and even Prince Harry and Meghan Markle have all decamped to Cove Spring House in St. James, Barbados, for a tropical getaway. Now, you too can live like a A-lister in the same famed island estate.

Perched atop a coral cliff, the beloved beachfront residence is surrounded by lush gardens and its idyllic positioning allows you to revel in picturesque views of the Caribbean Sea. Given its star power, it should come as no surprise that the ultra-luxurious hideaway is asking its next owner to cough up an eye-watering $40 million. (It even appeared on The X Factor and has been previously rented by judge Simon Cowell.) Honestly, any buyer with big enough pockets would be lucky to call the Georgian-style mansion home.

Spanning a whopping 20,000 square feet, the bonkers abode “was designed using coral stone, denoting the hallmark of the Caribbean aristocracy,” says the listing. Its castle-like appearance is meant to emulate the beauty of the island, and thanks to its open structure, trade winds are allowed to blow through and simultaneously cool down the dwelling. Additionally, you’ll find a ton of indoor-outdoor spaces inside the airy villa.

Altogether the palatial pad has 10 bedrooms and 10 bathrooms—which should be more than enough room for vacationing guests. It also comes with some pretty cool perks to keep everyone entertained from a fitness center and commercial kitchen to a media room and back patio that’s been decked out with a jacuzzi.

If and when you decide to make your way down to the beach, the property itself includes direct access to a secluded stretch of sand located at the base of the cliff. That means you’re free to stroll the shores sans crowds, almost as if you’re on your own private island. And if you want to explore Barbados even further, Cove Spring House is nestled halfway between Holetown and Speightstown.

Click here to see all the photos of Cove Spring House.