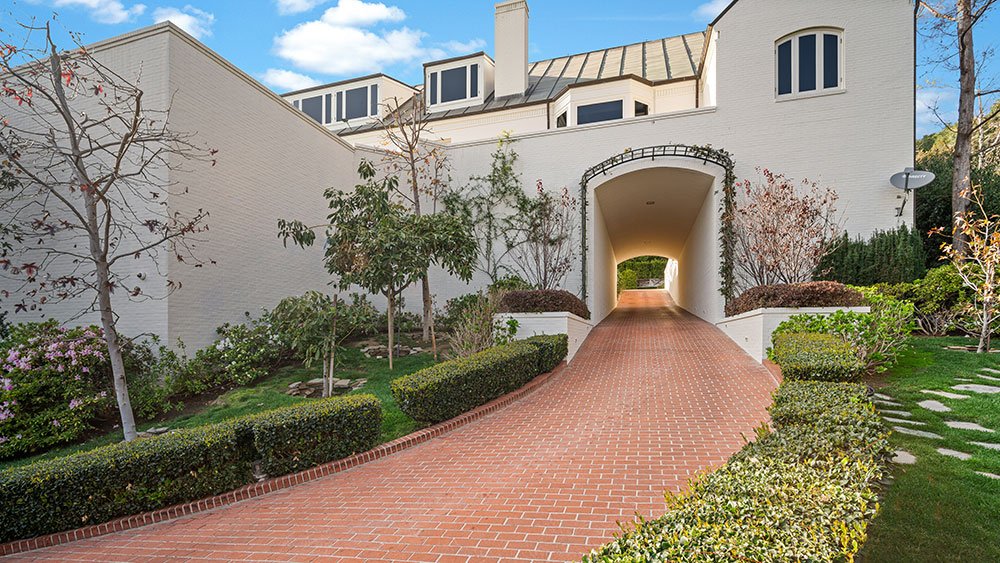 Try this in your best Viggo Mortensen Danish: Det er et interessant hus. Roughly translated it means “That’s an interesting house.” And we don’t mean “interesting” in the way your mother does when she doesn’t like your new outfit. No, we mean it more like it’s a house with both beauty and brains. If this home were a person, you’d want her at your dinner party.

The traditional and jaw-dropping Danish farmhouse is tucked away in the tony Brentwood neighborhood of Los Angeles, right in the shadow of the famous hilltop Getty Museum.

Designed by prolific architect-to-the-stars, the late Peter Choate—he penned palatial pads for everyone from Mel Brooks and Ryan O’Neil to Linda Ronstadt and Sharon Stone—the property is even more unusual because of its vast copper roof and its pass-through tunnel, built right into the house.

According to broker Steve Sawaii at WSA-Compass, Choate designed the home in the mid-1980s for telecom visionary John T. Thompson and his wife Anelisa, who both fell in love with Danish farmhouse architecture after trips to Denmark.

Thompson was the founder of LA-based industrial communications equipment maker, Communications Technology Corp, which he sold to machine tool giant Acme-Cleveland in 1984 for $33 million.

Sitting on a coveted 27,000-square-feet lot on Macculloch Drive, the estate is in a secluded cul-de-sac and comes with expansive views of hazy downtown LA, surrounding hills and the Getty.

A private gated entrance opens on to a winding paved driveway that takes you up to one of the home’s most interesting features—that long, arch-roofed tunnel under the house. Squeeze through and you enter a vast, paved motor court with a three-car garage and parking for 20 or more vehicles.

Choate designed the main house to be long and low, Danish-farmhouse-style, with stark, white brick and that verdigris copper roof with a single, central-mounted chimney.

An unassuming single-door entry opens into a grand foyer and a blank canvas of stark, bright-white paint. Every wall, every ceiling, pretty much every cabinet and wall fixture is decorated in white.

The house itself was completed in 1989 and covers 7,958 square feet on two levels, with the ground floor featuring a spacious great room with fireplace. It flows into a formal dining room and large chef’s kitchen with two islands and a butler’s pantry.

Also on this main level is a stunning, wood-paneled library with brick fireplace, a wooden ceiling and doors leading out to a poolside patio.

Stairs lead up to the second floor with its massive rec room featuring an oversized fireplace, architectural exposed beams, plus two adjoining office areas and a cavernous play/storage/games room set under the pitched roof.

Up here are four additional ensuite bedrooms, and each one suffers—if that’s the right word—from the effects of being located in the home’s pitched roof. But the slant-wall charm of each room is hard to deny.

Outside there’s a secluded swimming pool with an east-facing patio/sun deck, while at the rear of the home, a glass greenhouse sits within an ornamental garden.

The Thompson family has listed the home with WSA-Compass for $11.995 million following the death of Anelisa Thompson in February last year. Now if only Noma would set up a pop up in your new kitchen—that would satisfy our hunger for all things Danish.

One of the walk-in closets.  Dusan Simonovic

The kitchen, just off the dining room.  Dusan Simonovic