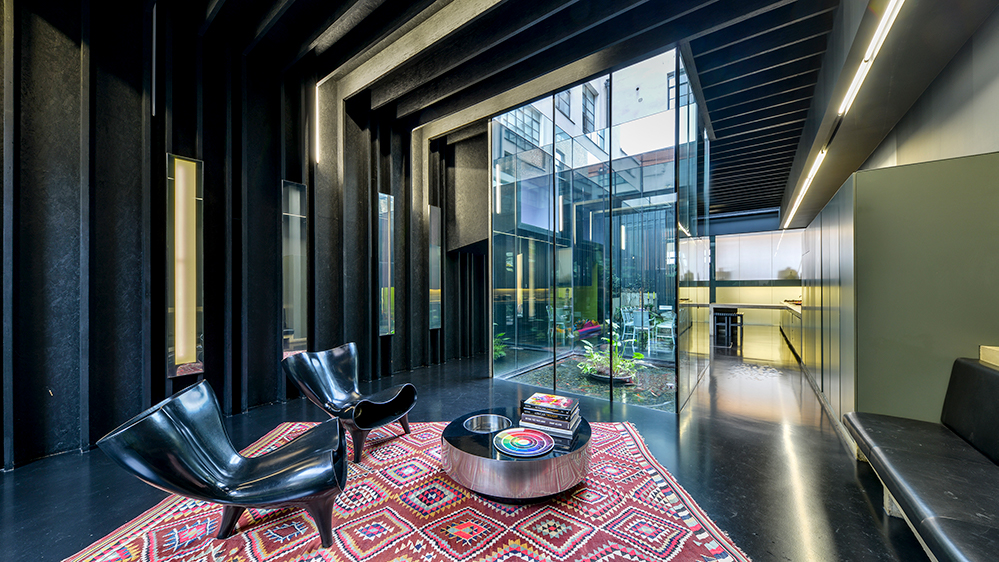 Real estate agents will talk up and down about properties being the ultimate in privacy—but in the case of Lost House, that’s actually pretty true. Because if you didn’t know this $8.3 million home was there, you’d probably never find it.

Designed by renowned architect Sir David Adjaye, the brain behind the National Museum of African American History and Culture in DC, the National Cathedral of Ghana and countless others, the home is situated in the heart of London’s Kings Cross district, among a slew of traditional commercial buildings. The entrance is just a small door embedded in a brick façade. Cross the threshold, though, and you’ll feel as if you’ve entered another dimension.

Like much of Adjaye’s residential oeuvre, Lost House’s style is one of clean lines and minimalism—with some concrete elements that give it a more industrial vibe. At 4,000 square feet, it’s a sprawling hidden oasis—one that looks part The Matrix and part Ex Machina.

But while the three-bedroom, three-bathroom residence’s privacy is certainly welcome, the fact that it’s so physically closed off from the rest of the world means there are no front-facing windows. To remedy this, Adjaye installed three skylights in the main living room, which, at 60 feet long, makes for the perfect party space. A central courtyard that the owners use as a tropical garden also lets the light in.

One of the home’s other curiosities is its indoor pool, which, unlike in many residencies, isn’t tucked away in the basement or the gym. Instead it’s part of the primary bathroom. It’s a lean lap pool, with a narrow window running alongside it, which overlooks the adjacent master bedroom.

Around the back is a two-car garage, plus a small sunken cinema in the living room. The home’s color palette is dark—the floors are black resin, and the walls are painted to match—but there are pops of color to be found in the courtyard garden and elsewhere.

The current owners are Americans who use Lost House as their London base of operations. They’ve often rented it out for films and commercials—the place has been featured in everything from the British TV show Spooks to Rolex and Hugo Boss ads.

If that sounds your speed, then best snap it up while you can—if you can find it, that is.