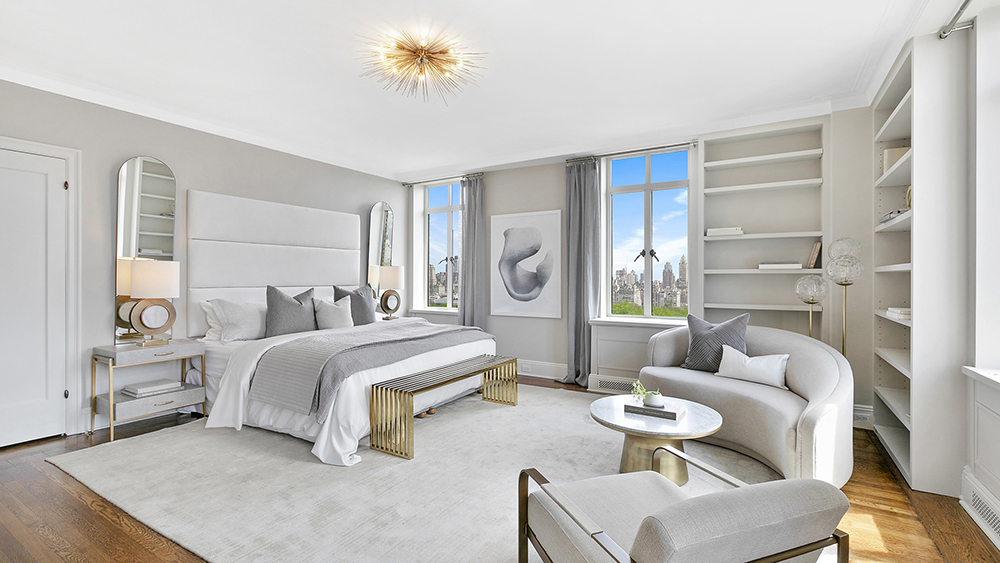 The Annie Hall star lived here in the early ’80s with a glittering array of A-list celebrity neighbors.

According to Vanity Fair, at the time, TV star Mary Tyler Moore was living in the building’s north tower while Keaton was in the south. Seems the location worked rather well for cinematic cassanova Warren Beatty as he was dating both actresses. At the same time.

More recently, Apartment 21C was home to the late Gordon McLeod, a top Dow Jones exec who’s credited with bringing the company’s top publications, including the Wall Street Journal, into the digital age.

McLeod first listed the apartment in March last year for $17.5 million. But following his recent death, it’s now back on the market with listing broker Dan Fishman of the Corcoran Group for a much-reduced $14.5 million.

“Rarely does an apartment in the San Remo’s iconic towers become publicly available. This truly is a unique opportunity,” says Fishman.

High on the list of the apartment’s many unique features is its jaw-dropping views of New York’s Central Park from pretty much every room. In a recent interview with Wine Spectator magazine, Keaton recounted the condo’s panoramic vistas. “It was one of those remarkable apartments. There was a window on every side. Everything was wide open.”

A private elevator from the San Remo’s elegant south-tower lobby whisks you into a spacious foyer. To the left, the stark-white living room and adjoining dining room; straight ahead, a wood-paneled library with full bath that could easily become a fourth bedroom.

The light-filled master suite occupies the southeast corner of the unit with a further two bedrooms off a long hallway.

But no square footage was sacrificed in creating the apartment’s vast, recently renovated, eat-in kitchen. Spanning almost 22 by 20 feet and with to-die-for views, it features industrial-grade appliances, funky black and white geometric tile floors and a breakfast nook with built-in banquette.

As for the San Remo, this legendary 28-story Beaux Arts landmark was designed in the late 1920s by visionary New York architect Emery Roth as the first twin-towered building in the city. Completed in 1930, it is still considered the grand dame of New York’s West Side.

And throughout its history, the building has been indelibly linked with celebrity. In addition to Keaton, past residents have included Rita Hayworth, Glenn Close, Dustin Hoffman, Steve Martin, Steven Spielberg, Barry Manilow, Steve Jobs and Bono.

Add to these Demi Moore and Bruce Willis, who bought a triplex penthouse in 1990. After originally listing it for $75 million, Moore reportedly sold it in 2017 for a fire sale $45 million.