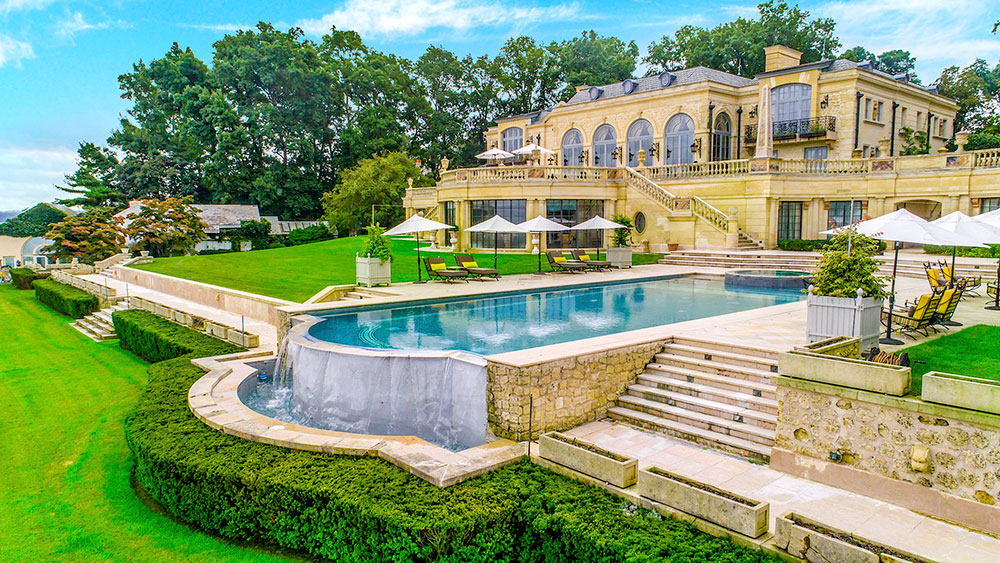 While the camera captures a boisterous bacchanalian beachfront party, what it doesn’t show is the shell of a majestic mansion just out of shot, beginning to take shape.

It would take a further eight years after Carlito’s Way hit theaters for Spring Knoll, this 26,000-square-foot palace in the upscale enclave of Kings Point, on Long Island’s Gold Coast, to finally be completed.

The home was the dream of a New York couple who wanted to pay tribute to the opulence and craftsmanship of France’s famous 18th century marvel, the royal Palais de Versailles, just southwest of Paris.

They sourced marble from the French quarry used for the construction of Versailles; they acquired 400-year-old Parquet de Versailles flooring from a French château; a rare marble fountain came from Villa Ephrussi, the Rothschild villa in the South of France; Pietra Dura marble flooring from Italy was imported for the foyer.

The Palace at Versailles inspired this living room  Photo: Courtesy The Friedman Team

And to install it all, French and Italian artisans were flown in—often for years at a time—to painstakingly recreate the look, feel and splendor of Versailles.

“It is the outstanding craftsmanship and sheer opulence that really sets this home apart,” explains listing agent Jason Friedman, of The Friedman Group and Sotheby’s International Realty. “Money and time were no object; everything was done to be the very best of the best.”

A waterfront haven on the Gold Coast  Photo: Courtesy The Friedman Team

The home itself sits on three acres of prime Kings Point waterfront made famous by F. Scott Fitzgerald in his novel The Great Gatsby. You approach the main house through handmade, wrought-iron gates and along a winding Belgian cobblestone driveway.

Dock your yachts out back  Photo: Courtesy The Friedman Team

Inside the home are six spacious bedrooms, seven full baths and 10 half-baths. In the great room, a soaring hand-painted ceiling has a veneer of real gold leaf, while floor-to-ceiling windows lead to expansive marble patios overlooking Manhassett Bay and the shimmering Long Island Sound.

Marble was sourced from Europe for the bathroom  Photo: Courtesy The Friedman Team

As for the master suite wing, it takes up three separate floors. The top floor is the actual master bedroom with a floor-to-ceiling, canopy-draped bed, multiple fireplaces, two bathrooms and a private elevator.

Other headlining features include a 12-seat, cinema-quality home theater, an expansive gym, wood-paneled library and a billiards room with walls covered in painted-and-gilded French Cordoba leather.

Outside, the highlight is arguably the spectacular infinity pool/hot tub made from imported Italian exotic blue marble. That and the deepwater dock—maybe the longest in the area—which provides mooring for a pair of yachts.

According to Jason Friedman, the owners, who have extensive property interests in Manhattan, have decided to return to city living. “They achieved their dream and now are looking for someone else to enjoy it.”