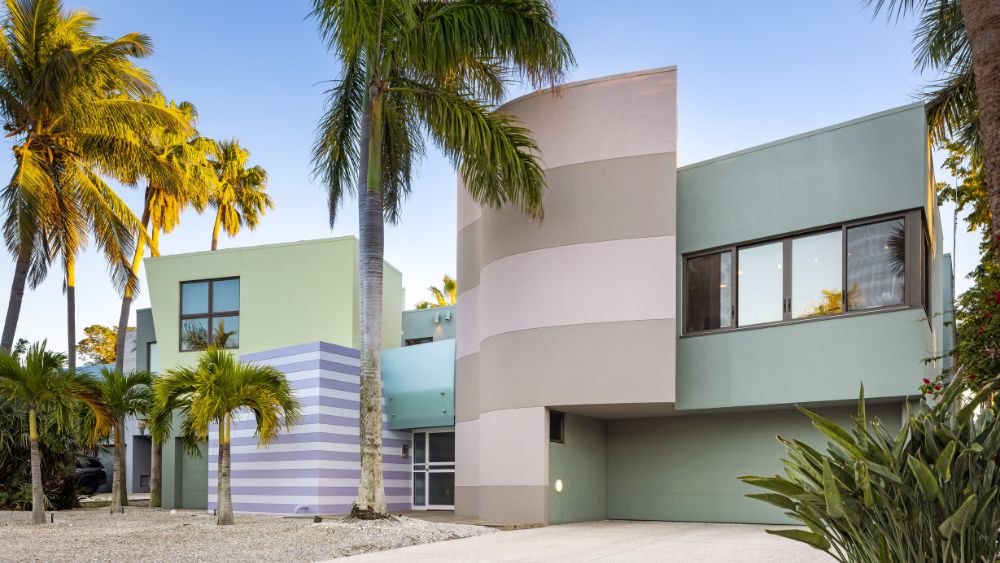 Got $10 million to spare? The Chapell House in Sarasota, a playful, postmodern masterpiece that’s a part of architectural history, may be the perfect place to splash your cash.

Located in Lido Shores, also known as a midcentury enclave, this whimsical Florida manse was designed by late architect Don Chapell as his personal residence. Unfortunately, Chapell passed away in 1999 during construction and never got to see his vision come to life. The build, however, was carried out shortly after in 2000 by his widow, Heather, with the assistance of contractor Pat Ball and interior designer Wilson Stiles, reported the Sarasota Herald-Tribune. Now, after more than two decades and only one stint of ownership, Chapell’s striking abode has hit the market for the second time.

“So much of it was in Don’s head. It’s an exceptional house. It’s Don’s best work and one of the most important houses in Florida,” Stiles told the newspaper. Spanning over 6,800 square feet, the estate is sited along the Pansy Bayou—a well-known refuge for protected marine wildlife. From the outside, the exterior is a hodgepodge of shapes and colors. Think boxes that appear to have been stacked together at different elevations. Some of them curved, some sporting stripes, some painted yellow and others green, gray or purple. It’s not exactly conventional, but it is decidedly retro.

Internally, the Chapell House has six bedrooms, including two suites, and six bathrooms. The interiors still have original design elements including poured terrazzo flooring, lots of Murano glass accents, custom wood built-ins and multi-hued surfaces that are intentionally mismatched. In addition to a central living room, kitchen and dining area, the second story is divided into two wings that have been bridged together by a catwalk. Upstairs you’ll find the primary suite is complete with its own water-facing balcony, a large closet and floor-to-ceiling windows. Elsewhere there’s a game room, office, nursery and guest suite.

Outside, the grounds have been secured with wraparound wings so you can enjoy the backyard in private. Whether that means watching the sunset from the expansive deck or practicing your swimming capabilities in the lap pool.

Click here to see all the photos of the Chapell House.